Dom Murtha gets you ready for another season of studying running back workloads from overall carries to red zone work in order to help you make the best lineup decisions and waiver claims for your fantasy football teams. 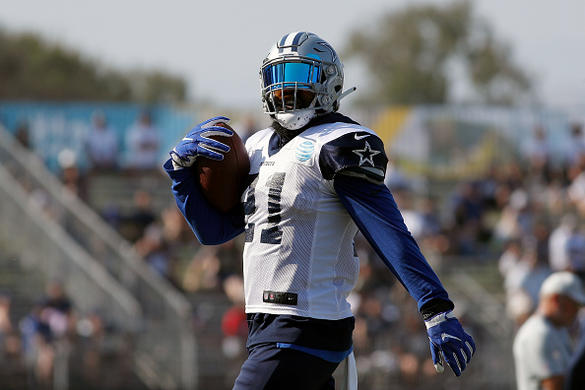 Welcome back to the Running Back Workloads!

I’m your host, Dom “NostraDomUs” Murtha, just as I have been for each of the last three seasons. For those of you who have been following this weekly article since 2015, you’ve become used to my strong takes on the position. Additionally, if I must say so myself, you have also become used to the refreshing format that lacks the typical formulaic “plug-and-play” structure – something that often bogs down weekly fantasy articles. For those who are new to the site, I’ll explain what I mean in a bit more detail.

Each week, the Running Back Workloads will obviously give an up to the minute update on the running back position at the NFL level, but instead of the expected listing of drab running back power rankings and chart of who’s getting the most touches, you will read a collection of storylines at the position around the league. These storylines are 100-percent original and written by yours truly, while they feature a range of literary formats. Typically, you can expect the light-hearted and patented NostraDomUs prose, as is featured in previous iterations such as “Love The Drake” and “Saints Go Marching In… To The End Zone” however, other times I admittedly can verbose into a waxing poetic as seen in last year’s “A Christmas Miracle Overdue” and “The Book Of Ezekiel.” Just know that with whatever is spit out on the page, it comes from a place of passion and thoughtful insight.

While so many fantasy articles nowadays are littered with charts, data tables, and info--graphs, the Running Back Workloads is a change of pace. Not to say that endless data is a harmful weapon to have on your side when trying to win a game of statistical analysis, but oftentimes the fantasy data you see each week can deal with the immediate rather than having long term foresight. While numbers and important statistics are often mentioned in my weekly running back storylines, the added connective narrative can paint a broader picture. Box scores and charts can be a structured science but only part of the whole information. Here, in each story of the Running Back Workloads, you get the significance.

In other news from this year’s article, gone is the “NostraDomUs Predicts” weekly DFS recap – a section that I managed to pick correctly over 60-percent of the time last season. While this is an unfortunate departure from my work this season, the DFS RB Coach is in the good hands of Tom Vecchio for 2018. I instead will be working on weekly game recaps and breaking down the X’s and O’s of each matchup.

Outside of weekly NFL running back narratives cut up like newspaper editorial columns, I’ll look to finish off the article with something consistent each week. Some thoughts I have in mind is a weekly preview section at the bottom – maybe some DFS RB sleepers. Or maybe I can inject a running back stock market and list some guys whose stock is most rapidly rising or falling. For now we will keep it as a fluid situation and see what eventually sticks.

Well, that’s about it for now. Let’s have an awesome opening week and make sure to check back in next Wednesday for our first real edition of the 2018 NFL Running Back Workloads.