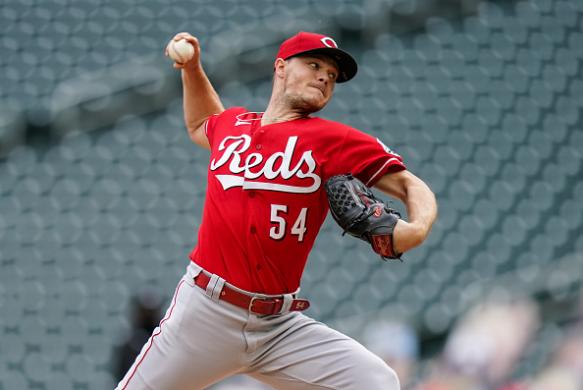 Cincinnati right-hander Sonny Gray was fine in 2020, but it’s fair to assume that fantasy owners were hoping for a little more. His .290 BABIP was about ten points above his career norm and when you look at his 3.70 ERA, it likely could have been lower. His FIP came in at 3.05 and his xFIP was 3.19, indicating that his actual performance was more indicative of a pitcher with an ERA in the low three’s.

On the other hand, through the end of August, one could argue that Gray was just as good as the two more heralded pitchers from the staff in 2020, Trevor Bauer and Luis Castillo . However, then September hit, and Gray was left wanting to be woken up when September ends. (Bonus points if you can name the band)

He missed part of the year in 2020 due a back strain, and while he didn’t miss much time overall, as he continues to get older, I wouldn’t be surprised if the Reds monitor his innings a bit. A development in spring will point to this notion as well, but we’ll circle back to that later on.

Gray continued to induce ground balls at a solid rate. In fact, his mark in 2020 marked the eighth straight season that he’s induced a ground ball at least half of the time. Even though he continued to induce plenty of worm killers, it was the first year that his slider posted a launch angle of less than ten degrees. He had done it for so long with his slider being above ten degrees, but of course, that means that something gave elsewhere. Well, it sure did, and it was with his changeup and curveball jumping up a bit. 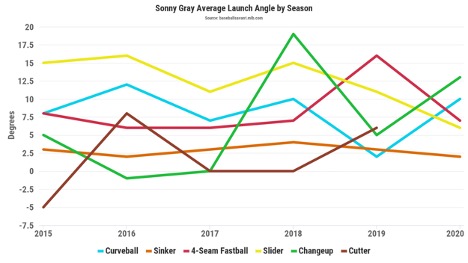 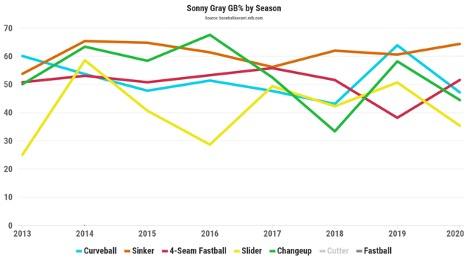 The 2020 season was the first time he crossed the 30 percent threshold for his strikeout rate and did so in large part due to a second straight season with more whiffs in the strike zone. The increased whiffs in the zone help explain the fact that his Z-contact rate dropped by nearly four percentage points from the year prior. 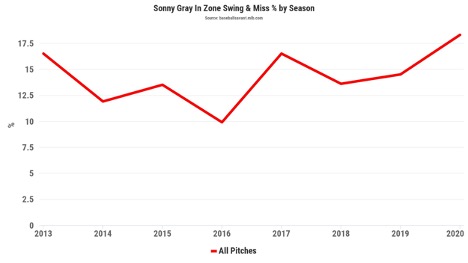 However, 2020 was the first year of his entire career that he posted a BB/9 above 4.00, and his 11.1 percent walk rate was 2.5 percentage points above his career mark. His zone percentage, per FanGraphs was below 40 percent for the second straight season, and his first pitch strike percentage dipped to a career low 54.9 percent.

Overall, his Statcast profile doesn’t overwhelm, but he’s above average in most categories. His career low exit velocity of 86.8 miles per hour and 3.7 percent barrel rate came in at the 77th and 89th percentile respectively. He has a deep repertoire that goes five pitches deep, but he predominantly uses four of them near equally.

Now, for Gray’s fantasy value in 2021, there’s underlying concern with some aspects of Gray’s game. He missed time last year with the back issue, and his velocity was down when he returned. Then, in the spring, he dealt with a back issue again, and was shut down for a couple of days. Cincinnati won’t be doing a six-man rotation, but don’t be surprised if they limit Gray at times throughout the year.

If you believe in his health, you’ll actively be targeting him as your SP2, but if you’re wary, it’s likely that you won’t be drafting him. The veteran right-hander is the 23rd pitcher (21st starter) off the board in NFBC formats, and will likely cost you a fifth or sixth round draft pick.

Personally, that’s a bit too pricy for Gray. I’d rather wait a round and grab José Berríos , or another couple rounds and snag Zack Wheeler or Ian Anderson . Honestly, it’s partially against Gray, but predominantly because of his price.

MLB Ohtani strikes out eight over five innings vs ARI

MLB Kershaw strikes out nine in dominant win vs TEX

J. Castro - C
HOU
Jason Castro went 0-for-2 with a strikeout on Friday in his minor-league rehab assignment debut with Triple-A Sugar Land.
Castro started behind the plate and caught five innings on Friday night. The 33-year-old backstop has been out since late-May due to left Achilles soreness. It will likely take him a few games to get re-acclimated before making his return to the Astros' lineup at some point soon.
Added 9:11 am (EST)
Added 9:11 am (EST)

L. Arraez - LF
MIN1
Luis Arraez went 1-for-4 with an RBI on Friday in his minor-league rehab assignment debut with Triple-A St. Paul.
Arraez started in left field and batted leadoff on Friday evening, picking up an RBI on a ground out in the seventh inning. The versatile 24-year-old outfielder has been out since late-May due to a right shoulder strain. Barring any setbacks, he could return to the Twins' lineup at some point next week.
Added 9:07 am (EST)
Added 9:07 am (EST)

J. Luplow - CF
CLE
Jordan Luplow went 1-for-2 with a walk on Friday night in his minor-league rehab assignment debut with Triple-A Columbus.
Luplow has been sidelined since late-May due to lingering ankle discomfort, but it sounds like he could be back with the Indians at some point early next week. The 27-year-old lefty-mashing specialist has gone deep seven times in just 36 games this season.
Added 9:04 am (EST)
Added 9:04 am (EST)

J. Williams - RF
STL
Justin Williams (neck) began a minor-league rehab assignment with Triple-A Memphis on Friday evening.
Williams didn't make an appearance in Friday's contest, but he should be in the lineup at some point soon at Triple-A Memphis. The 25-year-old outfielder has been progressing back from neck stiffness earlier this month.
Added 9:00 am (EST)
Added 9:00 am (EST)

J. Liranzo - SP
ARI
Diamondbacks signed RHP Jesus Liranzo to a minor-league contract.
Liranzo inked a minor-league deal with the Giants last season. He spent the previous two years in the Pirates' organization. The 26-year-old righty will serve as organizational relief depth for the Diamondbacks moving forward.
Added 8:56 am (EST)
Added 8:56 am (EST)

B. Lee - RF
CIN
Reds signed OF Braxton Lee to a minor-league contract.
Lee, 27, appeared in eight games for the Marlins back in 2018. He was picked up by the division-rival Mets in the minor-league portion of the Rule 5 Draft the following offseason, but never wound up making it back to the big leagues. He'll serve as organizational outfield depth for the Reds this summer.
Added 8:52 am (EST)
Added 8:52 am (EST)

M. Mariot - RP
CIN
Reds signed RHP Michael Mariot to a minor-league contract.
Mariot, 32, hasn't appeared in the big leagues since 2016 when he was a member of the Phillies. He'll serve as organizational relief depth for the Reds moving forward.
Added 8:50 am (EST)
Added 8:50 am (EST)