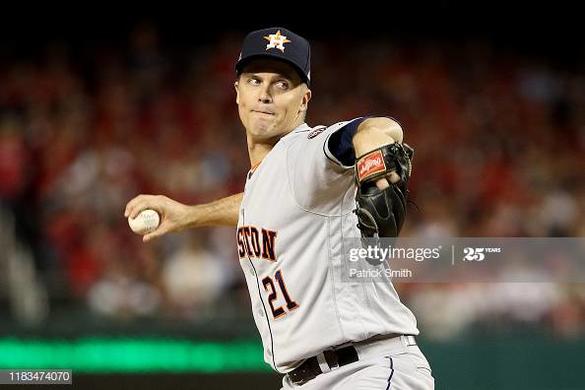 At the current pace, it may not be long before Zack Greinke ’s age is higher than the average velocity of his fastball! He’s more or less lost his fastball, but that hasn’t stopped him from being a productive fantasy pitcher, let alone an ace in reality. His fastball clocked in, on average just 90 miles per hour, and 46.5 percent usage rate of his fastball last season was the lowest of his career. Fortunately, with a never-ending arsenal of what feels like 38 different pitches, he managed to go 18-5 with a 2.93 ERA across 208.2 innings in the regular season. He wasn’t as good in the postseason for the Astros, posting a 4.68 ERA in five starts, but us fantasy owners care only about the regular season and Greinke was damn good in that realm.

Quick thoughts from the chart above are as follows:

MLB Glasnow on field with Rays for first time in camp

T. Glasnow - SP
TB
Tyler Glasnow was on the field with the Rays on Tuesday for the first time in summer camp.
Glasnow was spotted on the elliptical machine on the field. He's been absent from camp until this point and the Rays didn't provide an explanation. It's certainly good news to see him, though it's unclear how much he kept up with throwing and what sort of workload he could be ready for with the season approaching. There should be more clarity on that end soon enough.
Added 9:39 am (EST)
Added 9:39 am (EST)

J. Downs - SS
BOS
Chris Cotillo of MassLive.com reports that the Red Sox are adding prospect infielder Jeter Downs to their 60-man player pool.
Alex Speier of WEEI.com reports that left-hander Jay Groome and outfielder Jarren Duran will also be among the prospects invited to the team's alternate training site. Downs was acquired from the Dodgers in the Mookie Betts deal during the offseason and immediately become the team's best prospect. He's more likely looking at a 2021 debut.
Added 9:34 am (EST)
Added 9:34 am (EST)