NFL Week That Was: Week 7 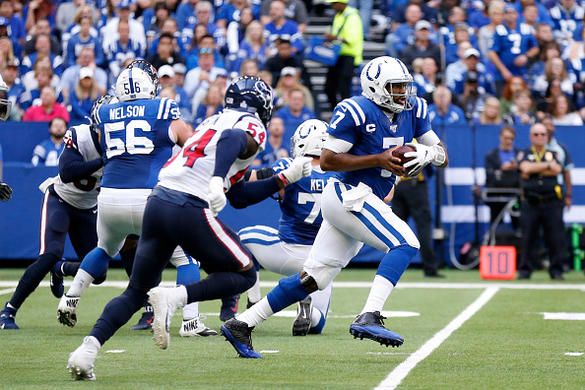 Jacoby Brissett :  It was Brissett, not Deshaun Watson , had a day to remember Sunday.  Jacoby went 26-39 for 326 yards, 4 touchdowns and no interceptions (and added 6 yards rushing).  That makes for a sweet 35 fantasy points in most formats.  Is this an aberration?  Well, I would have to say no.  In the last four weeks (not counting the bye week), Brissett has put up over 26 fantasy points in three of those four games.  On the year, Brissett has 14 touchdowns against just 3 interceptions.  I am not ready to anoint him a plug and play starter but he should be owned in all leagues and likely a starter next week when Dak and Lamar are on bye.  [Final note – with all of the injuries to QBs, including Matty Ice this week – having quarterback insurance is more important than in any year I can remember so act accordingly].

Marvin Jones :  Jones had a day to remember Sunday hauling in 10 balls for 93 yards and four touchdowns.  Yes, FOUR TOUCHDOWNS.  If you own and started Marvin, nice work.  A tip of the cap to you!  The question is what next for Marvin and what else can we take from this performance?  Well, given that he had only 20 catches in the previous five games, it is unrealistic to expect such big numbers going forward.  I think the break out was due to Kerryon Johnson getting hurt and thus opening up touches and Xavier Rhodes not being able to track Marvin.  Bottom line, this is a great sell high opportunity, but not before the tasty matchup on deck against the Giants.  Stated another way, sell Marvin high after the Giant game so you can sell him as a sure-fire producer against Oakland.  Just conveniently forget to mention that the Bears follow Oakland on the Lions’ schedule.

David Montgomery :  Montgomery received only four touches in Sunday’s loss.  Only four!  Honestly, it is mind-boggling that the Bears would trade away Jordan Howard (who trailed only Ezekiel Elliott and Todd Gurley in rushing yards in his time in Chicago), draft Monty and then let him sit in the proverbial corner.  Ugh.  There is no way to trust any Bear not named Allen Robinson at this point.  If you own Monty, you have no choice but to stash him on the bench and hope the Bears come to their senses.

Corey Davis :  Welcome back Mr. Davis.  After languishing in fantasy anonymity, Corey Davis reeled in six balls for 80 yards and a touchdown.  More importantly, new Titan quarterback Ryan Tannehill seemed to actually look for and target the team’s best downfield playmaker attempting to . . . wait for it . . .  make plays!  With Tampa on the schedule next week, Corey Davis is going to be active in all my lineups and likely in some of my DFS lineups as well.  After all, this is a guy who was the fifth overall pick in the draft, can go up and get the ball at 6’3”, can muscle smaller defensive backs with his 210-pound frame, and can run by the bigger defensive backs.  Buy low opportunity!

Jared Goff :  Last week we wrote: “I had to look twice to believe these numbers:  13-24 for only 78 yards and no touchdowns.  Yuck!  Even Ryan Tannehill playing only part of a game with his team getting shut out was better than that.  That said, Goff is about to get the perfect cure for this dud and a season where he has yet to throw more than touchdowns in a game – dates with the Bengals and Falcons in the next two weeks.  Yum.  Eat up those stats the next two weeks and then try and cut bait and sell high before the Pittsburgh, Chicago, Baltimore run of tough games get played.  Bottom line here, the Rams are simply not the offensive (or even defensive) team of a year ago.  Just not”.  Well, so far things are going according to plan.  Goff carved up the Falcons for 268 yards, two passing TDs and a rushing TD for 27+ fantasy points.  Ride the wave against the Bengals and then sell high!

Final Note:  Who should be the target of my rant?  Maybe the Cardinals?  Yeah, but not for the fantasy implications of the David Johnson juke but because they somehow decided to risk him playing one play and then deciding it was not worth it.  Yeah, and if it was too risky, why dress only two running backs?  Yeah, they beat the lowly, rebuilding Giants but boy what a mess.  Oh, and do not get me started on the Bengals or Falcons.  Eek. 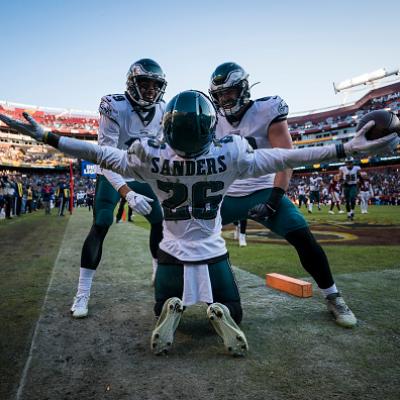 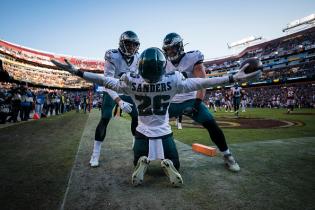 L. Perine - RB
NYJ
Jets signed fourth-round RB Lamical Perine to a four-year contract.
Perine (5'11/216) led Florida in rushing his final three seasons despite never reaching 140 carries. While he tested as an average Joe across the board at Indy's Combine, PFF charted Perine with just one drop on 55 targets in 2019, which were inexplicably 14 more than his previous three years combined. Those proven receiving chops combined with Perine's burning desire to pass-block could land him a third-down role ahead of Josh Adams or Trenton Cannon. Unfortunately, he'll only be serviceable for fantasy if he can cut into Le'Veon Bell's role on third down. Considering coach Adam Gase's clear antipathy for Bell, it's not outside the realm of possibility.
Added Yesterday 2:44 pm (EST)
Added Yesterday 2:44 pm (EST)

J. Wills - OL
CLE
Browns signed No. 10 overall pick OT Jedrick Wills to a four-year, $19.702 million contract.
A five-star recruit and two-year starter for Alabama, Wills (6’4"/312) allowed just one sack across 39 games. The 21-year-old was voted second-team AP All-American as a true junior, ranking as Pro Football Focus' No. 11 offensive tackle among 249 qualifiers with 500 snaps. His 74th-percentile Adjusted SPARQ athleticism at the NFL Combine also includes an impressive 87th-percentile 40-time (5.05) and eye-popping 97th-percentile vertical leap (34 1/2"). Overall, Wills projects as a high-upside prospect who has the technique to win in pass-pro and ferocity to clear gaping holes in any rushing scheme. Every one of Willis' high school and college snaps came on the right side, but the Browns are reportedly "very confident" he can man the left.
Added Yesterday 12:24 pm (EST)
Added Yesterday 12:24 pm (EST)

R. Mostert - RB
SF
NFL Network's Ian Rapoport reports Raheem Mostert wants his salary brought more in line with Tevin Coleman's.
Mostert is currently set to make $3 million with Coleman due $4.55 million. Mostert was the far more effective player during the 49ers' Super Bowl run and believes he is due a raise after agreeing to his current deal when he was still a core special teamer. He's not wrong, but the 27-year-old probably isn't going to find a receptive audience in a front office that knows backs are replaceable in Shanahan's system.
Added Yesterday 9:31 am (EST)
Added Yesterday 9:31 am (EST)

R. Mostert - RB
SF
Raheem Mostert requested a trade from the 49ers.
It's one of the only leverage points he has over the 49ers right now as he looks to increase his salary up from $3 million. Mostert was the most efficient back in San Francisco last season and ultimately took over playoff games during the 49ers' Super Bowl run. His agent, Brett Tessler, notes that Mostert's contract was negotiated when he was just a core special teamer, not when he was entrenched as the 49ers' Week 1 projected starter. A trade is possible, but it would make sense for both parties to reach an agreement on a slight pay bump before the season begins. Mostert is only seeking Tevin Coleman money ($4.5M). It seems helpful to be a running back in Kyle Shanahan's scheme, but what do we know. If Mostert is ultimately traded, Coleman's average draft position (RB43) would be a complete smash for fantasy football. It's also worth noting Jerick McKinnon (ACL) has yet to resume cutting.
Added Jul 08 5:08 pm (EST)
Added Jul 08 5:08 pm (EST)