Fantasy Baseball The Week That Was: April 15 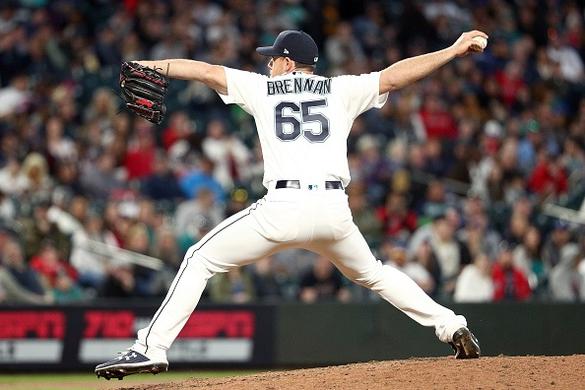 A bullpen sleeper with great metrics and a couple of underpriced hitters highlight this week’s Week That Was.

Brandon Brennan : Through Saturday night this week Brandon Brennan has tossed four scoreless innings and picked up a win.  Also, through Saturday, Brennan’s stats are well, sick:  0.00 ERA; 0.66 WHIP; >K/IP; fastball velo >94; 64% ground balls; 16% swinging strike rate; 68% first pitch strike rate and a whopping 41% chase rate.  This does not appear to be a fluke as the ground ball rates have been over 50% at every level and the swinging strike rates 15% or more the last two years.  Will Brennan get saves in Seattle?  Who knows?  However, the “down side” appears to be great ratios and some vulture wins.  Not too shabby.  [Thanks to Mike Podhorzer for picking up Brennan in Tout Wars which caused me to look deeper].

Neil Walker : Neil Walker went 2-5 with a dinger and two runs Saturday.  That is the good news.  The bad news:  through Saturday, he was still well below the Mendoza line at .190 and each of his three dingers were solo shots.  So, is Saturday the beginning of better things to come? I vote yes.  First, Walker has been insanely unlucky in the early going.  His BABIP is a putrid .167 (career level is .301) despite a torrid hard hit rate of almost 58% (5th in MLB thus far).  Last year, Walker started slowly and got better as the year went on.  Unlike last year, he had a full spring which means the surge is coming earlier.  I am in.  Oh, and by the way, that he is eligible at 1b, 2b, 3b and in many leagues, OF, doesn’t hurt. 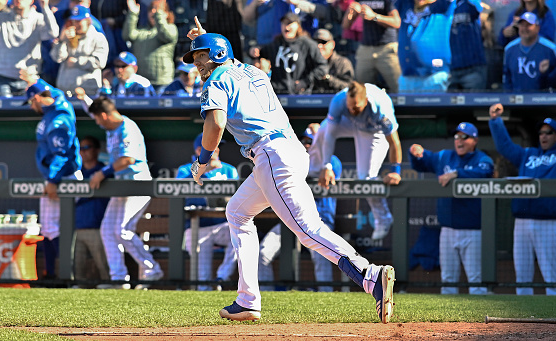 Hunter Dozier : Hunter Dozier went 2-3 and a run scored on Saturday.  Productive, but hardly a line that jumps off the page.  So why is he featured here?  Good question.  Answer:  I think he is a bargain on which loyal readers can pounce.  His year-long stats through Saturday are ok: .256 with three dingers and six RBI.  However, from Sunday to Saturday, Dozier hit .346.  Now that is a sit up and take notice number.  What can we expect going forward?  First, the .242 BABIP says the average will continue to increase from .256.  Second, the 40+% hard hit rate further supports point number one.  Third, the vastly increased contact rate and substantially decreased chase rate also bode well.  Finally, he is walking more and striking out less than a year ago.  Add in the fact that you have multi-positional eligibility and a team that will let him ride out slumps and you have a potential bargain on your hands.

Eduardo Rodríguez : Eduardo Rodríguez finally pitched like the ERod we expected back in March.  Friday night ERod tossed 6 and 2/3 innings of two-run ball walking none and striking out 8.  After two duds, ERod is back on course.  Why was I so high on him back in March?  First, three years of 11+ swinging strike rates.  Second, he has improved his first pitch strike rate each of the last three years.  Third, the league hit the ball hard a weak 28% of the time.  Finally, as bad as the Sox have been, they will score runs and provide plenty of opportunity for ERod to get the W’s.  With his ugly year-long stats, ERod may well be available in a trade from an unwary owner in your league.  If so, act quickly!

Joe Musgrove :  Last week we wrote: “Joe Musgrove twirled seven innings of shutout ball Friday giving up three hits and one walk while striking out 8.  Combined with his two shutout innings of relief to start the year, Musgrove now has nine blank frames and counting.  The window to buy is closing fast!  Want proof?  OK, here goes.  First, Joe has posted swinging strike rates over 11 and a 45% ground ball rate each of the last two years.  Second, he induced more swings outside the zone last year than the year before.  Third, Musgrove upped his first pitch strike rate to over 68%.  Elite advanced metrics + stellar early results + Ray Searage as a pitching coach = roto value!  Buy!”  Did ya listen? Did ya? We hope so.  All Musgrove did was go out and pitch 6.3 innings while giving up no earned runs and 4 hits while striking out 6.  The window may already be closed but if he is still available by FAAB or trade, grab him for his start this week vs the Tigers and for all of 2019!

Finally, the moment you have been waiting for all winter (ok, maybe all month) -- Schultz says: “Schultz thought it would be fun as well as topical to discourse on the possibility of Chris Davis going 0-for-the-season or at the very least 0-for-April. Setting aside the ignominy of no longer being the best Chris Davis in baseball and that the A's slugger surely must have changed the spelling of his name so as not to be confused with his less-worthy namesake, the time seemed ripe to discuss whether the Mendoza line needed to be reconsidered. If for no other reason than to spite Schultz, Davis went 3 for 5 on Saturday, ruining what would surely have been a masterpiece of roto-literature.

Speaking on underproducing, while the rest of Crash Davis' season will likely be different shade of underwhelming, Franmil Reyes ' probably will whelm, if not overwhelm. If you look at all of the acronym-based, x-stats that no one really understands, they apparently all say that Reyes should be hitting for a higher average and slugging more home runs than his stat line says he is actually doing. (At least that's what people who claim to be able to decipher advanced metrics say that's what the stats say). The eyeball test - otherwise known as the time-tested original manner of detecting baseball merit - should tell you all you need to know about Reyes. He has a sweet swing, a good eye and significant power. If you can buy in low, do so. Especially, if you are in a keeper league.

Speaking of buying low, the chance to do on Touki Toussaint may be dwindling. Immensely talented, Toussaint lost control of the final spot in the Braves' rotation in the same manner he lost his control at the end of spring training. After his performance against the Mets - striking out 7 over 6 relief innings - the Braves are wisely moving him out of the bullpen. (He also managed to get 4 at-bats, which seems like it should be some type of record for a non-starting pitcher). There will be some hiccups as Toussaint re acclimates himself to the major leagues but there is a lot of value to be had here.”

Response: Love Touki!  Nice call there.  As to advanced metrics and the eye test, I advocate using both!