Fantasy Baseball Week That Was & Will Be: Brubaker is Legit

Glenn Colton takes an in-depth look at the past week of the MLB season and what's to come for fantasy baseball owners moving forward. 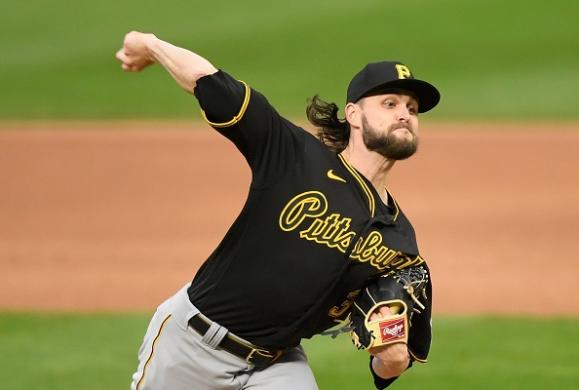 Upside starters and a great “mistake pitch” hitter highlight the Week That Was and Will Be.

J.T. Brubaker:  Yes, if one pitches for the Pirates, hard luck losses will be all too common for starters who pitch well.  That said, Brubaker’s 7 innings of two-run ball with 5K against 0BB is welcome on any of my teams any day.  On the year, JT has balled with an ERA barely above 2.00 and a WHIP below 1.00.  Nice.  Oh, and add in the high ground ball rate and solid swinging strike rate, you have a prescription for continued success.

For the Week That Will Be:  I know the Cardinals can swing the bat but J.T. looks like a “set it and forget it” starter at this point.  If anyone in your league is a doubter, help them out and take a very solid pitcher off their hands at a discount!

Giancarlo Stanton :  There is no doubting the power or the potential.  Both were finally on display Friday night as Stanton went yard twice in a Yankees win.  That is where the good news ends.  Stanton sits well below the Mendoza line at .186.  At this point, he kind of looks like Pedro Cerrano from Major League in that he crushes fastballs over the middle of the plate and swings in an aesthetically unpleasing fashion at everything else.

For the Week That Will Be: The Yankees have seven games against Baltimore and Detroit.  If there is ever a week for Stanton to hit, this is it.  Oh, and remember that fantasy is not reality.  In fantasy, if Stanton hits 40 dingers off of mostly bad pitching on bad teams, you get 40 homers.  In reality, if he only hits bad pitching, the team will not win a title.  You get it.

Domingo Germán :  Not to focus too much on the Yankees, but this one is interesting.  German looked completely lost in the first inning of his start this week giving up three early runs (two earned).  However, he settled down and ended up with a win after tossing five shutout innings to follow the dud of a first.  On the night, German struck out six and walked only one over those six innings.

For the Week That Will Be: German has the dream two-step, facing Baltimore and Detroit.  Sign me up.  The ground ball and swinging strike rates are solid and he is getting more chases outside the zone than he did in his 18-win 2019 season.  Yes, I know the ERA is bad but that is what makes German a buying opportunity.  Buy!

Logan Allen :  It appears what the Yankees’ bats need to wake up was an outing against the Cleveland lefty.  In fact, Allen was gone after just two innings of five hit, four-run ball in which he struck out only one.  Not to pile on but he was lucky the damage was not worse with all the pitches left in hitters’ sweet spots.  On the year, Allen has a 6.28 ERA and 1.47 WHIP.  Unfortunately, the advanced numbers look just as bad – swinging strike rate under 8% and a first pitch strike rate at 55%.  Oh, his FIP is worse than his ERA and fastball velo is down two MPH from last year.  Not good.

For the Week That Will Be: I have heard people say that the Twins struggle v. LHP.  I think that changes this week unless Logan Allen makes some serious changes and makes them quickly.

For the Week That Will Be:  I like the two-step against SEA and TB as matchups but I am worried.  First, Javier does not keep the ball on the ground and in the MLB, often flyballs turn into home runs.  Second, he is throwing fewer than half of his first pitches for strikes and no one thrives behind in the count often. Third, despite elevated line drive and fly ball rates, not one ball has left the yard on him this year.  Now, if the walks come (and they will if you are behind in the count) and the flyballs leave the yard, the ERA could go up and go up fast.  Thus, it is not a surprise that his xFIP is around 1.5 runs higher than his ERA over the last two years.  Make some calls and see if you can sell high.

What to do if your FAAB bids did not go as planned:

If you did not get the pitchers you want, consider these middle relievers on teams with weak or unsettled closing situations or starters in need of replacement:  Cal Quantrill – given Logan Allen ’s struggles highlighted above and Quantrill’s pedigree, high first pitch strike and ground ball rate, and his solid and consistent velocity, this could be a buy low opportunity; Tyler Chatwood thrived in the pen in the past and is coming back to a Blue Jay pen that is in disarray.  High leverage innings are in his future.

If you are in the mood to gamble, how about Scott Kingery .  I know he had a terrible 2020 and an even worse spring.  I also know he is not getting the playing time right now.  However, Mickey Moniak, Roman Quinn , and Adam Haseley hardly remind anyone of Willie, Mickey and the Duke.  Kingery is still only 26 and has a 19 HR/15 SB season (in 500 PA) under his belt already.  Speculate!

And Last But Not Least:

While we’re dwelling on interesting things that have little to no value, let’s talk about Victor Robles , shall we? Long before Juan Soto was a roto-thing and well after the hype of Bryce Harper , Anthony Rendon and Trea Turner had passed, Victor Robles was the apple of every prospect-hungry roto-practitioner’s eye. That would constitute the interesting part. As for the rest, as this is being written, in one month, the Nationals center fielder has .214 with zero home runs, 1 run batted in, 1 steal and 4 runs scored. Pretty much ¾ of Major League Baseball has amassed those stats in a single game.

As the Nats promoted Robles to the majors when he was still in elementary school and Juan Soto calls him “sir,” it’s easy to forget that Robles is only 23. Pretty much the same way that the start of his season has made it quite easy to forget that he hit 17 homers and stole 28 bases in his last full season or that he had a remarkably productive pre-season. It’s amazing what dreadful numbers will do to a fantasy-owner’s memory.

Response:  It is a long season and speed (or even the potential for speed) is very valuable.  The Nats have gotten off to a tough start.  True.  Robles has been bad.  True.  However, going under the hood, there is reason for hope:  a) Victor’s .344 OBP is solid and should yield steal opportunities; b) strikeouts are way down and walks are way up from a year ago; c) his hard hit rate is going in the right direction; d) his line drive rate remains high; and e) his plate discipline has been really strong in that he chases out of the zone almost half as often as a year ago.  Hang in there.  It is still VERY early.

MLB Donaldson (calf) remains out of lineup vs. Rangers

MLB Alex Bregman (quad) has 'no timetable' for return

R. Stock - SP
CHI
Cubs designated RHP Robert Stock for assignment.
Stock needs to be removed from the 40-man roster to allow the Cubs to purchase the contract of Kyle Ryan. The right-hander allowed five runs and walked six in his start on Wednesday against the Mets, and assuming he isn't claimed, he'll likely remain with the organization as depth with Triple-A Iowa.
Added 11:41 am (EST)
Added 11:41 am (EST)

K. Ryan - RP
CHI
Cubs purchased the contract of LHP Kyle Ryan from Triple-A Iowa.
Ryan was designated for assignment back in May, but stayed in the organization and now will have a chance to help the Chicago bullpen in the middle innings. Cory Abbott is sent back to Triple-A in a corresponding move.
Added 11:37 am (EST)
Added 11:37 am (EST)

B. Nimmo - CF
NYM
Brandon Nimmo (finger) is beginning a rehab assignment with Triple-A Syracuse on Monday.
Nimmo should need about a week in Triple-A before he's ready to return. The outfielder has been taking BP without any issues as he recovers from his injury that has kept him from playing since May 13. There's a very good chance Nimmo is playing everyday for the Mets before the end of June.
Added 11:28 am (EST)
Added 11:28 am (EST)

M. Williams - CF
NYM
Mets designated OF Mason Williams for assignment.
Williams is removed from the roster to make room for Jerad Eickhoff. The outfielder struggled to a .212 average in 37 plate appearances, and it's very possible he goes unclaimed and heads back to Triple-A Syracuse in a few days.
Added 11:16 am (EST)
Added 11:16 am (EST)

J. Eickhoff - SP
NYM
Mets purchased the contract of RHP Jerad Eickhoff from Triple-A Syracuse.
Eickhoff has made eight starts for Triple-A Syracuse, and he's posted a 5.32 ERA in his 44 innings. He's probably been a little better than that number considering a 41/13 K/BB ratio. That being said, it's been a while since Eickhoff has been a recommended option in fantasy, and this won't be when that changes. Mason Williams was DFAd to make room for Eickhoff.
Added 11:15 am (EST)
Added 11:15 am (EST)

C. Gallagher - C
KC
Royals placed C Cam Gallagher on the 10-day injured list with right shoulder impingement syndrome.
The Royals backdated the stint on the IL to June 17. He was hitting .196 with a .472 OPS in 22 games before the injury. Sebastian Rivero will be Salvador Perez's backup while Gallagher recovers.
Added 11:11 am (EST)
Added 11:11 am (EST)

S. Rivero - C
KC
Royals recalled C Sebastian Rivero from Triple-A Omaha.
Rivero will be the backup catcher while Cam Gallagher recovers from a right shoulder impingement. He won't get enough playing time to have any sort of fantasy relevance.
Added 11:04 am (EST)
Added 11:04 am (EST)