Craig Mish rings the closing bell with a quick interview he did with Miami Marlins pitching prospect Sandy Alcantara. 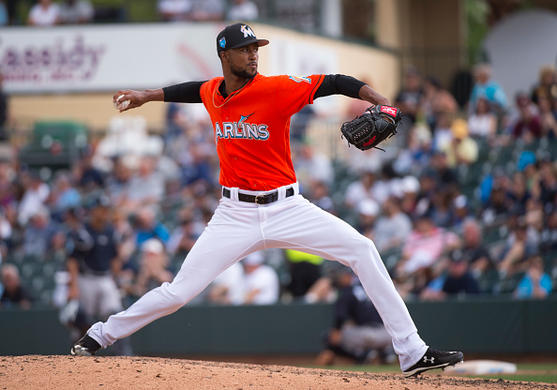 BEST DEAL EVER FOR CYBER WEEK! DOMINATE the competition! WIN with the #FAmily! Get LeagueSync, Lineup Generator for DraftKings & FanDuel, Award-Winning DFS Playbook, Robust Tools & more. No New Payments Until 2022! Click Here to GET STARTED!
Miami Marlins starting pitcher Sandy Alcantara  is currently ranked by Baseball America as the organization’s top Major League Prospect, and MLBPipeline.com has the 6-foot-4, 170 lbs hurler as the club’s No. 2 overall young phenom. Alcantara was acquired by Miami in the Marcell Ozuna trade this winter with the St Louis Cardinals, and is currently pitching for the team’s Triple-A affiliate New Orleans. To date, Alcantara has posted 32 strikeouts in 33 innings pitched, with a 3.27 ERA in the hitter-friendly Pacific Coast League. Fantasy baseball owners should certainly take notice, as it is only a matter of time before he joins the team’s big-league rotation. For those who don’t know much about the Dominican-born future star, I asked him seven questions that may help you in your analysis of the young pitcher, and what the future could hold for one of the top pitching prospects in the game.
1. You’ve made six starts in the minor leagues with New Orleans, how do you feel they have gone?
I think I've had some success, I feel there's always improvement but I'm working on the little things that will give me long term success. Command, location, breaking pitches etc.
2. Before each of your starts, what is your focus ? Does it change based on the team you are facing or is it something personal for you as an individual?
The day before I pitch I watch the game, I sit on other teams hitters and look at pitches and locations where they are most vulnerable. Although, my focus is still to work on my development and things I need to improve on no matter the result I get from each hitter.

3. Your fastball is known as your most effective pitch.  Last year your average fastball was 98.6 miles per hour. Has that been something that has just come natural to you and do you feel it will be your best pitch in the major leagues?
Yes, my fastball is a natural gift, I'm blessed to have it. I still need to work on conditioning to maintain my velocity. Yes, I think that will be my best pitch in the Big leagues.

4. Which other pitches have you been working on in New Orleans, and do you feel like there is a second pitch for you that has improved since we saw you last year with the Cardinals?
Definitely my curveball, I've been working on it a lot in bullpens and sidework, I feel I have better bite and command of it since coming over from the Cardinals.
5. Scouts often say command and control are the last things to develop before a pitcher becomes “elite” at the major league level, would you say that command and control are the most important aspects of your game that are the final steps to becoming an elite pitcher ?
Yes, That's my focus, any pitcher that can consistently command and spot pitches will have a better chance to be successful at the MLB level.

6. Who have been your mentors at the major league or minor league level to this point ? What have you learned from them?
In the minor leagues my pitching coaches were my mentors and when I got the Major League level Carlos Martínez , Trevor Rosenthal, Adam Wainwright  (attack hitter with your best pitch, stick to what works, continue working hard and development) It's no coincidence those guys are really good.
7. When the Marlins call you up this year, it will be your first Major League Start, and your first appearance for the team that traded for you.  Who will be in attendance at the game, and what would you like to say to fans who are very excited to see you make your debut in a Marlins uniform?
My wife, son, family and my agent will definitely be there. To Marlins fans I will always give them 100% and hopefully that's enough to get a W.
NEXT ARTICLE
TAGS:

C. Holmes - RP
PIT
The Rangers have announced the hiring of Chris Young as their new general manager.
Jon Daniels had been the team's president of baseball operations and GM but will now drop the GM from his title. Interestingly, one of Daniels' first moves as Texas' GM was trading Young along with Adrian Gonzalez to the Padres back in 2006. Young had been in the running for the Mets' GM gig, but he removed himself from consideration to take the Rangers' job, in part because he lives in Dallas. The Princeton grad was most recently employed by Major League Baseball as an executive.
Added Yesterday 4:14 pm (EST)
Added Yesterday 4:14 pm (EST)