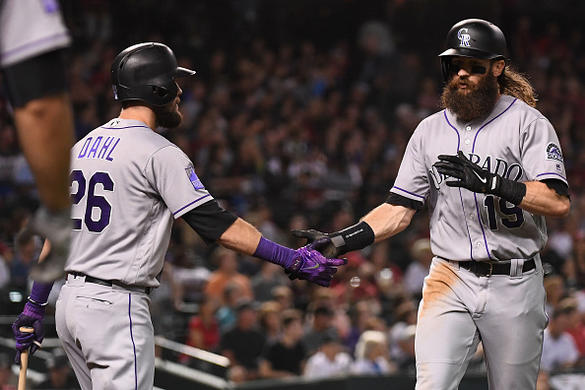 Please note that this was written before all lineups have been posted, which may open up new routes to consider.  Weather doesn’t look to be an issue tonight, except for cold temps in the CWS/MIN game.

From the top of the playbook: We have a nine-game MLB slate for the last Saturday of the season, and although Coors is still in play, the slate is more built around the top pitcher of the slate in Corey Kluber.  While the line may increase a bit, the game in Coors has an under ten-run implied total at the moment, and it’s the Brewers vs the winless Daniel Norris who check in with the highest implied run total of the slate.  If I’m paying up for players outside of Kluber, I’m looking at the outfield tonight.  Overall, I’ll try to list some top routes below, but may have to fully wait for lineups to come out, as a majority of the teams are playing for next year, or may rest some players to gear up for the playoffs.  The Rockies, Brewers, and Braves are the only three teams playing for playoff positioning tonight, and will look to focus most on the Brewers and Rockies.  Finally, this is my last MLB playbook for the season, and want to thank all those that have read this, and the lineup construction pieces over the season.

Five Second Cheat Sheet:  Corey Kluber is the top option, with the rest of the slate a step behind in my opinion.

Thirty Second Cheat Sheet: Aaron Nola or James Paxton look to be the best pivots off of Kluber, but it’s the last weekend of the season, and not the time to fully extend pitchers with expanded bullpens.  That is what is keeping off of Wade Miley, which leaves Zack Godley as my top value option.  Kyle Gibson is also in a solid spot vs the White Sox in cold weather tonight.

I’ll likely be using Kluber is a majority of lineups, and going cheaper with that #2 SP on DK.  Stephen Strasburg is a sneaky play, and same with Anibal Sanchez.  It’s hard to see plenty of runs scored in the MIA/NYM game, so Trevor Richards or Steven Matz could also be in play.  I mentioned some other routes in the playbook, but the main pitching focus for me is Kluber.

Our projections have Kluber leading the way, followed by Paxton, Nola, Skaggs, and Godley.  Skaggs is the top FD value play, while Godley checks in towards to top of the DK value options.

Five Second Cheat Sheet: The Brewers have the highest implied run total of the slate, with the Rockies behind them up against Strasburg.

Thirty Second Cheat Sheet:  Unlike last night, I think you can go against the game in Coors, but keep in mind the Rockies are swinging hot bats, and will be motivated one way or another after the afternoon Dodgers game ends.  I wouldn’t be surprised to see the Brewers highly owned, while the late night games present some solid routes to take vs weaker pitchers.

Positional Thoughts:  Plenty of routes to take tonight, and always best to try to pair your players up from the same team if trying to decide between similar priced options.  Last series of the season, so expect teams to try to give all of their players one last start, but just not sure who starts on which days.

Catcher: The Twins catching options are likely your best route in either Willians Astudillo or Mitch Garver.  Rest of the options are best used in team stacks, and should look for punt options like LuCroy once lineups come out.

First Base: First base is stacked like most positions, and it comes down to your team targets.  Peter O’Brien and Tyler Austin are sneaky plays once again, while Jesus Aguilar, Paul Goldschmidt, and Freddie Freeman would be my high priced options outside of stacking.

Second Base: I’m leaning Robinson Cano, but can’t go wrong with Jose Ramirez.  Logan Forsythe and Daniel Descalso lead the value plays listed in the playbook unless Jonathan Schoop makes an appearance in the Brewers lineup.

Shortstop: I made the case for the high priced options in the playbook, but Hernan Perez on FD would be hard to ignore as a top value play if he’s starting.  Marcus Semien is a sneaky late night option.

Third Base: Not paying up for Anthony Rendon on DK, but don’t mind using him over Nolan Arenado on FD.  Eduardo Escobar works nicely in a D-Backs stack, while Johan Camargo is in the same boat with a Braves stack.  Other routes were mentioned in the playbook.

OutField: Plenty of routes to go in the OF, but the decision likely comes down to the Christian Yelich and Ryan Braun combo, or the Charlie Blackmon and David Dahl one.  Both combos are elite, but you do get Braun for a discount, and prefer targeting Norris over Strasburg if entering just one lineup.  Mike Trout leads the late night plays, but the Seattle OF, as well as David Peralta are in play for me.  Franmil Reyes is cheap on Dk, while the CWS/MIN game has some solid salary relief plays.

Our hitting coach, James Grande, likes Dahl, Castellanos, and Yelich if paying up, while McNeil , Astudillo, and Palka would be his mid-priced GPP targets. David Wright is his sentimental top value play.

Our projections have plenty of elite options with close projections at the top, with Lindor leading the way over Yelich, Donaldson, Harper, and Goldy.  Souza checks in as the top FD value option, and is also towards the top on DK.

Most of what was written above works for GPP’s as well, although I do suggest stacking as your best chance to win a GPP.

If playing GPP’s, your best approach is stacking.  Pick a game, or two teams that you think will blast off, then go all in on them.  Yes, entering your cash lineup, or another type of lineup can cash in a GPP, but if looking to finish in the top 1%, you need to hit with a stack. I mentioned my team targets, as well as some four pack stack routes in the playbook, but I likely won’t be sneaky like last night with the Marlins, and stick to the Brewers and Rockies.  I’m not against a late night stack, and it would be the D-Backs for lower ownership than the Mariners for me.

Our stacking coach, James Grande, makes a solid case for the Brewers and Mariners tonight.

G. Bautista - RP
SEA
Gerson Bautista left his intrasquad appearance Saturday because of an injury.
According to Ryan Divish of the Seattle Times, Bautista followed up a 101-mph pitch with a 94-mph offering and got a visit from the trainer. He was lifted and it looked like he pointed at his elbow on the way out. Bautista is vying for a spot in the Mariners pen.
Added Yesterday 6:52 pm (EST)
Added Yesterday 6:52 pm (EST)

S. Ohtani - DH
LAA
Shohei Ohtani is dealing with mild back stiffness, but he's still on schedule to make his next intrasquad start.
Ohtani was terribly wild in his first intrasquad start Tuesday, throwing just 15 of his 50 pitches for strikes. He's due to pitch again in a couple of days, and given his early control troubles, we're curious to see how he fares.
Added Yesterday 4:16 pm (EST)
Added Yesterday 4:16 pm (EST)

T. Thornton - SP
TOR
Blue Jays manager Charlie Montoyo said he's sticking with a five-man rotation and that Trent Thornton is currently penciled into the fifth spot.
That doesn't leave any room for top prospect Nate Pearson, of course. Expectations are that the Jays will send Pearson down for at least a couple of weeks, allowing that to gain an extra year of control of his services. Things would get interesting if the Jays were to lose a starter prior to Opening Day... it'd make it extra difficult to justify keeping Pearson down.
Added Yesterday 3:27 pm (EST)
Added Yesterday 3:27 pm (EST)

E. Olivares - CF
SD
Outfielder Edward Olivares is making a strong case for a spot on the Padres' roster, according to MLB.com's AJ Cassavell.
Olivares was initially cut on March 8, so he wasn't going to make the team had things progressed normally this spring. However, he was included on the 60-man roster for the restart and he's impressed in intrasquad action. As a right-handed hitter, he could platoon with Trent Grisham in the outfield. His inclusion would probably leave either Franchy Cordero or Drew Naylor without a roster spot.
Added Yesterday 3:06 pm (EST)
Added Yesterday 3:06 pm (EST)

Y. Céspedes - LF
NYM
Yoenis Cespedes (ankle, heels) said Saturday that he's "certain" he'll be ready for the start of the season.
There were some doubts about that back in the spring, but Cespedes has drawn rave reviews so far in Mets' camp. In addition to how he looks with the bat, he's also looked a bit spry running and playing the field. He'll likely see most of his at-bats out of the DH spot, but whatever else he can do would be a nice bonus. Cespedes is coming back from multiple heel surgeries and a fractured left ankle. He's appeared in just 119 games dating back to the start of the 2017 season.
Added Yesterday 2:48 pm (EST)
Added Yesterday 2:48 pm (EST)