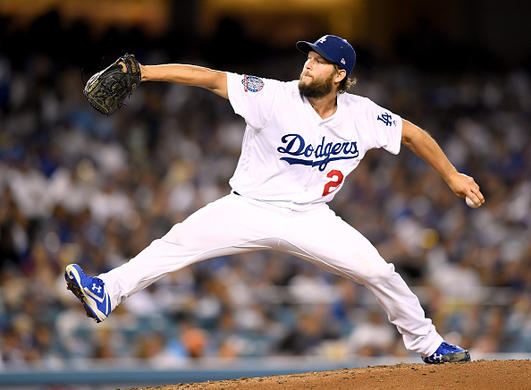 After looking at all of the tools available at Fantasy Alarm, the example lineups page should be used to help validate your thoughts, as well as help you consider some options that may not have been on your radar for the slate.  In addition to the example lineups, below you will find a breakdown of possible routes to take when building your MLB lineups tonight. While we are focused on FanDuel and DraftKings, this breakdown can be used for all sites. Please use our live chat feature to share your thoughts, and receive any feedback leading up to first pitch.  Good luck!

From the top of the playbook: 14-game MLB slate tonight, and the only game currently with a double digit projected run total also has the largest weather concern in the SEA/TEX game.  There is also some concern in the MIL/PIT, and both those games are very much worth monitoring leading up to lock time. The other key issue to keep an eye on is the Red Sox lineup after clinching last night. Taking away the weather concern games,  the Yankees check in with an implied run total of roughly more than a full run over the field tonight, although the A’s and their 31 runs the last two games may creep up to over five runs. Finally, please keep in mind once again that it’s the end of the season, and always best suited to play gpp’s at this time of the season.

Five Second Cheat Sheet:  Best to pay up for pitching tonight, and have plenty of options to choose from.  I like others more, but hard to ignore Arizona’s lineup.

Thirty Second Cheat Sheet: I still prefer Corey Kluber or Stephen Strasburg , but Clayton Kershaw moved ahead of Robbie Ray for me.  James Paxton and Jack Flaherty are solid pivots up against playoff teams, while Nathan Eovaldi is your lower priced, high risk/high reward play.

The D-Backs are rolling out their “B” team, but it did work for them last time vs the Cubs.  I don’t think they get to Kershaw though, and thinking he adds a few extra K’s to his stats tonight.  There is also potential rain in Washington, and worth keeping an eye on if targeting Strasburg. I’m not against Cole Hamels or Felix Pena over some of the other potential routes.

Thoughts from the Fantasy Alarm Team: Our projections have Strasburg leading the way, followed by Paxton, Kluber, Kershaw, and Ray.  Eovaldi is the top FD value play, while Mitchell checks in as the top DK one.

Five Second Cheat Sheet: Coors checks in as the top game target, but playoff bound Cleveland, Houston, and Boston are all great targets.

Thirty Second Cheat Sheet:  Gray pitching for the Rockies actually bumps up the Phillies bats for me, but it’s the Rockies checking in with the largest implied run total by a wide margin.  There are other teams facing weaker pitchers tonight, as well as a popular Cubs team vs a solid pitcher in Taillon. From those top teams, I prefer the top priced Houston bats, with the cheap Boston hitters.

Plenty of routes to take tonight, and always best to try to pair your players up from the same team if trying to decide between similar priced options.

Catcher: Wilson Ramos is the top option if you can afford him, but Yan Gomes is cheaper and on fire.  Other routes are best used for stacks, with Christian Vasquez likely your best punt option. Could pay a little more for other routes in the playbook like Aramis Garcia .

First Base: Yuli Gurriel and Steve Pearce work if targeting those teams, while Anthony Rizzo would be my preferred pivot.  Other routes were listed in the playbook, including Jose Miguel Fernandez to pair up with a high priced Trout.

Second Base:  Robinson Canó is swinging a hot bat, while José Ramírez has a high price tag.  José Altuve is a solid pivot off of both of them, while both Coors options are in play.

Shortstop: Javier Báez is my top option outside of stacking, while Lourdes Gurriel Jr. makes for a nice pivot up against his brother.  Brandon Crawford and Manny Machado lead some late night hammer options.

Third Base:  It’s a tough one at third, but likely using this spot on a cheap Brock Holt on FD, or Rafael Devers from the Red Sox.  Evan Longoria leads a list of other cheap pivot options depending on your team targets.

Outfield: Plenty of routes to go in the OF, but would start with a Charlie Blackmon led Rockies outfield, as well as a Rhys Hoskins led Phillies one.  They both have cheaper teammates that are in play as well, especially David Dahl for me, and Parra for James. Mike Trout is my preferred top play over the Boston OF and Yelich, but won’t talk you out of them.  Punting wise, Jonathan Davis, Kole Calhoun , and Franmil Reyes are all solid plays, but the Cleveland OF is a solid group to look at for cheap if thinking Covey gets rocked.

Thoughts from the Fantasy Alarm Team: Our hitting coach, James Grande, likes Betts and Trout if paying up, while Rizzo and Parra would be his mid-priced targets.  Duffy and Vogelbach would be his top value plays.

Our projections have J.D. and Betts leading the way, followed by Arenado, Lindor, and Trout.  Pearce is the top FD value option, while Calhoun is the top DK one.

Most of what was written above works for gpp’s as well, although I do suggest stacking as your best chance to win a gpp. If playing gpp’s, your best approach is stacking.  Pick a game, or two teams that you think will blast off, then go all in on them. Yes, entering your cash lineup, or another type of lineup can cash in a gpp, but if looking to finish in the top 1%, you need to hit with a stack. I mentioned my team targets, as well as some four pack stack routes in the playbook, but I do like a HOU/TOR full game stack, as well as the cheap Boston bats.  The Coors game is very much in play, and I like the Rockies side of that game.