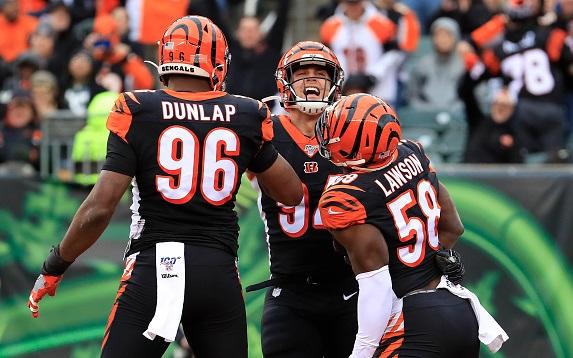 Congratulations if you are participating in your league’s playoff rounds, no matter how you arrived there. There are a handful of IDP to troll for on your waiver wire profiled below, with the most options available in the DL category. All should be available on most waiver wires, too, in each IDP group.

With Myles Jack listed as questionable for Week 14, after sitting out last week’s contest, look for Payne to see significant snaps on defense once again. If he comes close to his 13 total tackle (TT) production from Week 13, he will be an extremely valuable wire pickup for those looking for LB help. He also pitched in against the Bucs with a sack and a QB hit/hurry (QH) as well as providing for a loss of yards on one of those double-digit tackles (TFL).

Dupree was a former 1st round draft pick, and has been quietly putting together an impressive IDP portfolio. He picked up 1.5 sacks against the visiting Browns offense, contributing six TT (four solo) and some additional big play stats: a pair of QH, a pass deflection (PD) and a forced fumble (FF). The Steelers do not feature an every-down LB on their defense, but Dupree is lining up for significant playing time along with standout LBs T.J. Watt and Mark Barron .

Seems difficult to believe that McKinney has not been featured yet this season, but now is a fine time to grab the LB before your league mates realize his value. He has two great matchups and one decent one over the next three weeks, which arrive at just the proper time as playoffs hit. Since the Week 10 bye, he has collected 26 TT tackles.

Dunlap has turned it on for the past three contests, racking up 4.5 sacks and 19 TT (10 solo) over that time span. He had seven TT against the visiting Jets last week (six solo, three TFL), and a whopping six (!) QH and a PD in that game as well. The next two weeks do not look overly promising but he has racked up 4.5 sacks over the past three weeks, coinciding with a significant uptick in his snap count as the primary left DE for the Bengals.

Barnett finally took advantage of the snaps he is playing for the Eagle defense, sacking the Dolphin QB and racking up four QH in Week 13’s contest on the road. He also collected six solo tackles (two TFL) in the game. He has a pair of good matchups on the schedule, with the Giants coming to Philly this week, and then a trip to the nation’s capital in Week 15.

Martin is an edge rushing LB that qualifies at DL in both Yahoo and ESPN formats, making him a valuable IDP. He has been credited with his first sacks of the season the past two games, snagging 1.5 in Week 13 along with a trio of QH, and three TT (one solo, one TFL). He is coming on at the exact correct time if you need to add a big play DL to your roster.

The Colt DE has a nice matchup in store this week, taking on the Buccaneers who allow the fifth most points to opposing defensive ends on the season. He has four sacks on the season, and gets to face Carolina in Week 16, another good sources of sacks.

Oliver lost his starting role earlier this season, but is seeing a more consistent share of the snaps on defense of late. He had two sacks on 40 snaps in Week 13 against the host Cowboys, to go with four TT (three solo, one TFL). He also was credited with some big plays, with a PD, FF and QH showing up on his stat sheet. Buffalo is rotating three DTs on defense, so Oliver as a low percentage owned IDP is a find in DT-required leagues.

Clark will be the starting strong safety for the Ravens with Tony Jefferson now on the IR. He is a dependable commodity in a strong Baltimore defense, picking up a sack in Week 13 against the 49ers, along with seven TT (five solo). He also forced a fumble and had a QH in that contest.

The rookie took advantage of the additional playing time generated by a concussion suffered by Ronnie Harrison , and he collected seven TT (six solo) along with a sack, a QH and a FF against the visiting Buccaneer offense. If Harrison cannot play in Week 14, look for Wingard to shine again in a great matchup against the Chargers.

Roby returned to action as essentially an every-down DB and he produced at a high level, coming off a hamstring injury that held him out of action since Week 6. He had four TT (three solo, one TFL), and added big play production with a sack, a QH, and INT and a PD. Unfortunately, he does not have a great matchup until Week 16 when the Texans take on the Buccaneers on the road.

Mack has seen his production fall off dramatically over the past five games, with just 12 TT (10 solo) over that period, and just one sack. He can bust out any time, naturally, as a top LB in the NFL, but has not been worth starting of late.

Reddick was on the field for just a single snap on defense in Week 13 (he did have 10 special teams snaps), and the talk is that he is being considered for a move to edge rusher. While that may seem positive, the lack of sacks in his career does not inspire great confidence in him going forward.

Despite being an every-down LB, his stat lines are woefully inadequate for fantasy purposes. Over the past three weeks, he has collected just 10 TT, and just a single solo last week against the Chiefs. The matchup in Week 14 against the Titans is a poor one, although Week 15 has the Jaguars visiting, and he could break out against a more favorable offense in terms of allowing LB production, but there are enough better options available to not risk continued limited tackle numbers.

The Bills have seen the production of their starting right DE dry up entirely the past two weeks, despite still playing substantial snaps on defense. Weeks 10 and 11 saw just a pair of solo tackles on the stat sheet, so the trend makes him unusable at present.

The Panthers season is trending in a southward direction, and Jackson’s value is suffering with that tendency. He has just five assists over the past two weeks, and that is not the type of fantasy production you want on your squad as playoffs begin.

Remember, the first team listed is the one to use your IDPs against. Do not go crazy, and play a LB5 against the Giants, but certainly you will do well if you own a top LB or DE on the Falcons or a DL on the Raiders that you can plug in this week, for the most part.

As ever, good luck and Godspeed in your fantasy efforts. Make sure to read all of our great articles to help you win your fantasy match ups every week and ultimately bask in championship glory. FANation Chat is live on the site, to help you work through your fantasy football dilemmas. Or if you have any fantasy football questions, especially about IDP leagues, you can also send a message to ia@fantasyalarm.com for a personal response from the writer of this article. Naturally, the more detail you can send about your league, such as number of teams, platform you play in (Yahoo, ESPN, etc.), scoring and roster system, the better the ability to provide accurate advice.