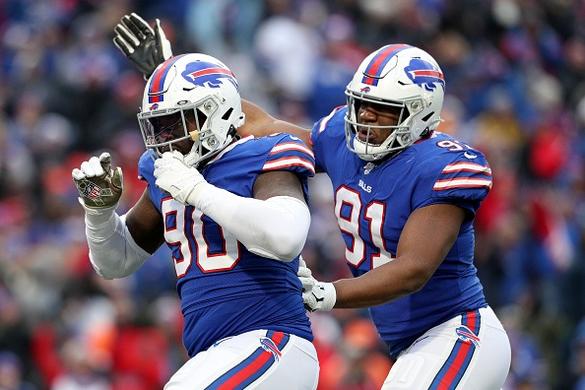 Yippee, the bye week horror is past us. And there are plenty of rising IDP to consider adding to your fantasy playoff rosters. So let us just get to the information, so you can prepare for the three Thanksgiving Day contests that are arriving anon.

The Texan linebacker racked up 16 total tackles (TT), with 13 of those tackles being of the solo variety. He is not much for big-play value, however, but in tackle-oriented leagues, he is extraordinarily valuable.

Golden collected another sack against the host Bears, giving him 7.5 on the season. He also contributed with a QH and four TT (three solo). Three of the tackles were for a loss of yardage (TFL).

Hewitt returned from a neck injury a week ago, and since that time has been an every-sown LB for the Jets (well, to be accurate, every down but one last week, but why quibble?). He had seven TT at home against the Raiders (four solo), and tossed in a pass deflection (PD) and a QB hit/hurry (QH), for those looking for big play production.

The Lion defense has been disappointing overall this season, but Davis has been productive for his fantasy owners. Last week, he grabbed eight TT (six solo, two TFL) with a sack and a couple of QH as additional benefits. The Lions take on the visiting Bears early Thanksgiving Day, so there could be some gratitude from IDP players by the time the turkey is carved Thursday.

On the other side of the line in Week 12 where Davis was rolling up fantasy points, Holcomb was equally valuable: 13 TT (seven solo, one TFL), a sack and two QH. He has a great matchup against the Panthers on the schedule in Week 13, so now is a fine time to snatch him off the wire. Just be advised that Week 14, Holcomb heads to Green Bay where fantasy production by LBs has been sparse.

Brown is another LB that put up double-digit tackle numbers in Week 12 with 15 TT (11 solo). This week’s opponent, the host Colts, are ranked fifth on the season in terms of allowing fantasy points to opposing linebackers.

Much praise has been lauded on the 49er defense so far this season, with good reason, and Warner is a pass-rushing talent that is a part of that production. He is coming off an 11 solo tackle effort (one TFL) where he also forced a fumble (FF), a QH and collected another sack, his third in the past three contests. Be aware that he may not be available for pickup off the wire as he is owned in about 1/3 of leagues.

Lawson has been a good edge rusher with three sacks in his past two games. He is playing significant snaps on defense lately, so the sack production could continue.

Heyward provides production for both tackle-oriented and big play leagues. In Week 12, he collected six TT (two solo, one TFL) along with a sack and four QH. The next couple of weeks are not great matchups for DE production, but his overall ability makes him a dependable option at DL.

Remember when he was profiled way back in Week 2’s IDP Report? Probably not. The Bengals are going through a tough season, to be sure, but Hubbard is seeing the bulk of the snaps on defense and is a consistent source of tackles for his fantasy owners. He had six TT last week (four solo, one TFL) and despite the team playing from behind consistently, also contributes with the occasional PD and/or sack, providing one of each against the Steelers in Week 12.

With the Lion defense banged up, Okwara is seeing extra time on the field. He collected five solo tackles against Washington in our nation’s capital last week, and now takes on the Bears on Thanksgiving who should be running the ball against the host Lions.

The 49er DE was profiled way back in Week 3, but deserves another mention in case you have forgotten about him. He collected a pair of sacks in Week 12 against Aaron Rodgers and the Packers and is the top pass rusher for San Fran. Putting up four QH and five TT (two solo, one TFL) is more than just sauce for the goose. If you did not pick him up after his Week 3 profile, do so now.

Griffen has been a consistent source of sack production this season, with seven to date, and four in his past five games played. He is also contributing steady tackle numbers, averaging 4+ per game over that same five game period.

Richardson had two sacks this past week against Miami, but filled up the stat sheet other than that, too, with a FF, PD, two QH and five TT (four solo, one TFL). He has a pair of good matchups on the schedule coming up, as well, with the Steelers hosting the Browns in what is sure to be a grudge match this week, and then the in-state rivalry with the Bengals coming to Cleveland.

The Dolphins turned to Godchaux, and he saw 79% of the snaps on defense in Week 12 in Cleveland, turning in a seven TT effort (four solo) while also tallying a half a sack and a pair of QH. In a DT-mandatory league, if his snap count stays high, he is worth picking up.

Another DL to consider in DT-required leagues, Guy is a steady tackle producer, but also provides occasional big-play production.

Reid put up huge numbers against the Saints, with 15 TT, 11 of those solos and one TFL. He was also able to deflect a pass from Drew Brees . Week 13’s matchup is decent, but in Week 14 he gets to go up against the Falcons, the second most generous offense with regard to safety production.

Vaccaro is an every down DB for the Titans, and putting up excellent, sustained tackle production in nearly every contest, with 60 TT over the season (36 solo). If you need an injury replacement or a DB2 to replace an underperforming IDP, he is well worth consideration.

James and Phillips are able to return from IR status, but you will need to monitor their status. Phillips is a LB that qualifies as a DB, so the potential value is great. James was a DB1 last season, so picking him up now would be a savvy move.

Jabrill Peppers , the former starting strong safety for the Giants, is dealing with a fracture in his back. Thus, the door opens for Love to step up. He could split time with Michael Thomas as SS, but it was Love that saw the bulk of the defensive snaps in place of Peppers, and the Giant SS is a productive IDP role traditionally.

Davis had a big week against the Falcons, snagging an INT and five (!) PD in Week 12. With five solo tackles, he was an across the board performer in the defensive backfield. Three of his matchups in the next four weeks project out as favorable, which should be a consideration with the fantasy playoff season upon us.

Jackson is another DB that will see a bigger role with an injury to a fellow player, in this case Malcolm Butler . He rolled up 12 TT against the Jags in Week 12 (10 solo, one TFL) with a PD. Note, though, that he is dealing with a calf issue although is not on the injury report below as of publication.

None to speak of this week, save for the IDP on the Injury Report below.

While Sheard did put up some big plays in Week 12 with a pair of QH and a PD, his recent run as an IDP has been less than stellar. In his past four games, he has just six TT, a sack and two PD, and single digit fantasy production per contest from an edge-rusher is simply not acceptable.

He is in the injury report below, with a shoulder injury, and since the Falcons play on Thursday, he is a real risky start, even without his lack of production this season.

Rankins is not being relegated to the bench, but certainly is not showing up on the stat sheet. He has been shut out with zero TT over the past five games he has played.

Norman was benched and relegated to special teams, resulting in a huge goose egg for a stat line in Week 12. It is a revenge game in Week 13 with Carolina hosting Washington in Week 13, but it is difficult to trust him right now.

Remember, the first team listed is the one to use your IDPs against. Do not go crazy, and play a LB5 against the Giants or Falcons, but certainly you will do well if you own a top DL on the Colts that you can plug in this week, for the most part.