Ivar Anderson takes a look at IDP players, rankings and strategies each week of the 2019 NFL fantasy football season. 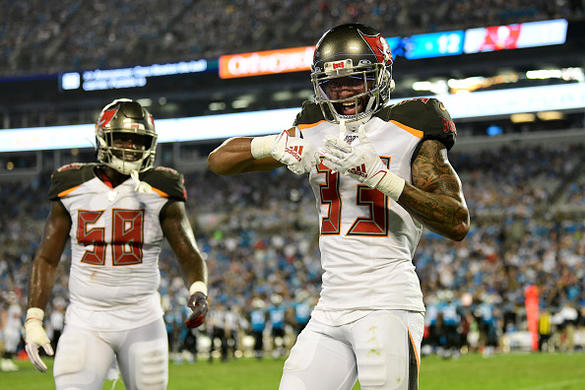 As the early season cranks up, there are plenty of options to consider adding to your roster in the event early injury has struck your defensive squad, or if you find that an IDP you drafted a few weeks ago is not playing up to expectations. Plenty of early injuries to deal with, as is to be expected with the nature of the game, as set forth further down in the injury report.

Barrett has close to a three-down role now that he is out of Denver and playing for the Bucs, and racked up three solo tackles, all for a loss of yards (TFL) against Carolina in Week 2. He also collected four QB hits/hurries (QH) and a trio of sacks to pad his stat line.

Note that he was limited in practice on Wednesday and is listed as questionable for the Week 3 contest against the Giants.

Brown is coming off a tremendous tackle-production game against the visiting 49ers, with 14 total tackles (TT), although 10 of those were only assists, which limits the fantasy value. It is looking like the Bengals will be on defense a whole bunch this season, so the middle linebackers for the Bengals should continue to be useful in tackle-oriented leagues.

Miami is shaping up as defense that is also going to be on the field plenty of snaps, and Baker should be the recipient of plenty of tackle opportunities as a result. He is coming off a 12 TT effort against the Patriots (seven solo).

The weak-side LB for the Jags is schemed to produce IDP results, and that is where the rookie Williams plays. He recently put up a nine TT effort in Week 2, with six of those tackles of the solo variety.

Mayowa has collected 3.5 sacks while playing just 43 snaps on defense for the Raiders in 2019. He forced a fumble (FF) in the contest against KC last week, as well as contributing two QH and three TT (one sol, one TFL), along with 1.5 sacks. The sacks may trail off, although his production may lead to increased playing time, and increased chances to get to opposing QBs.

Hendrickson picked up another sack last week, giving him three on the season, and also forced a fumble from the visiting Ram offense. He is not a great source of tackles, having collected just five TT this season, though, so he is much more attractive in big-play leagues to date.

The fifth-year veteran has played the most snaps of any San Francisco DL through two games, and has collected a sack in each contest. This week, he gets to take on a QB making his first start when Pittsburgh comes to visit.

The Patriot rookie gets to face off against a third-string QB in the form of Jet Luke Falk . He is another DL that is not much in terms of a tackle-producer, but is coming off a two-sack effort against another sub-par offense in Miami, so big play potential exists.

Walker has played every snap on defense for the Lions, and has 19 TT on the season, collecting 10 last week (seven solo, one TFL). The Detroit secondary looks strong out of the gate, and Walker in his second season seems to be coming on with the Detroit D.

Harrison will be relied upon to provide run support for the depleted Jaguar linebacking crew, and picked up a sack and eight TT in Week 2 against the Texans (four solo).

Jackson is an athletic IDP, and he put up two pass deflections (PD) against the host Broncos last week, as well as racking up 10 TT (six solo). He has the potential to be of value in both tackle-oriented and big play leagues in an IDP secondary.

On the other side of the field in Week 2, Simmons was also busy with a pair of PDs himself, as well as nine TT (eight solo).

Pittsburgh is likely to see more defensive time per game with their starting QB sidelined for the season, which will lead to more opportunity for production by this second-year defensive back. He is building on an 11 TT effort in Week 2, and while he does not look to be a big-play DB, the tackles are what you usually seek in a safety in IDP leagues.

The first-round pick has begun the season as an every-down strong safety in Green Bay. The Packers’ linebacking corps are not a strength of the defense, so he should see plenty of tackle opportunities given his time on the field. He collected six solo tackles and a FF against division-rival Minnesota last week.

Note that Savage is on the injury report with a shin issue and is listed on Wednesday as questionable for Week 3 against the Broncos.

None to speak of, except for those linebackers listed below in the injury listing below.

None to write about, save for those in the injury report below.

Thomas put up just a single assisted tackle in Week 2, and has a mere 2 TT on the season, despite playing over 100 defensive snaps in two games. That sort of production is the sort that leads to benching in for fantasy purposes, if not an outright drop.

The veteran’s snap count is declining over the first two games this season, and while that is a small sample size, the Colts without their preferred starting QB due to Andrew Luck ’s retirement may see them showcase their young talent, such as fourth round pick Khari Willis. Keep an eye on his stat line and snap count going forward, but with just three TT in Week 2 (two solo), it would be prudent to show him your bench for the present.

Remember, the first team listed is the one to use your IDPs against. Do not go crazy, and play a LB5 against the Colts, but certainly you will do well if you own a top LB on the Raiders, Giants or Green Bay that you can plug in this week, for the most part.

NFL Matthew Stafford not being shopped

NFL Andy Dalton will be involved in trade talks

P. Peterson - DB
ARI
General manager Steve Keim confirmed Friday the team had discussed Peterson's contract with his representation, noting nothing has transpired yet, but that "we'd love to see him retire as a Cardinal," Grant Gordon of NFL.com reports.
For a full breakdown and detailed player analysis GO PRO and join the Fantasy Alarm Family! CLICK HERE to unlock your PRO package and take advantage of instant savings!
Added Feb 15 12:45 pm (EST)

J. Hurst - OG
BAL
Hurst will be suspended for the first four games of the 2020 regular season for a violation of the NFL's policy on performance-enhancing substances, Ian Rapoport of NFL Network reports.
For a full breakdown and detailed player analysis GO PRO and join the Fantasy Alarm Family! CLICK HERE to unlock your PRO package and take advantage of instant savings!
Added Feb 14 3:35 pm (EST)