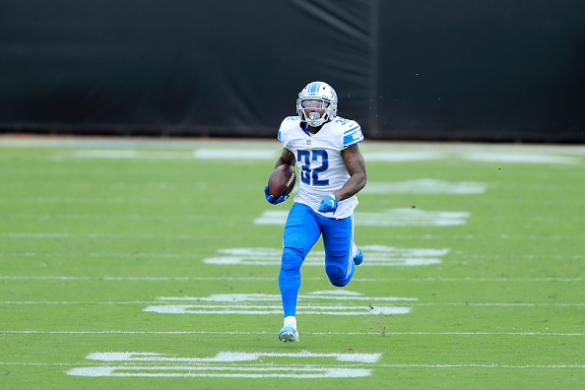 Welcome back to the Fantasy Alarm Early-Week NFL Injury Report for Week 13 of the NFL season! It has been a crazy one up to this point, but we have to finish strong! Let’s discuss some of the important statuses that we should be monitoring heading into the latter part of the week. 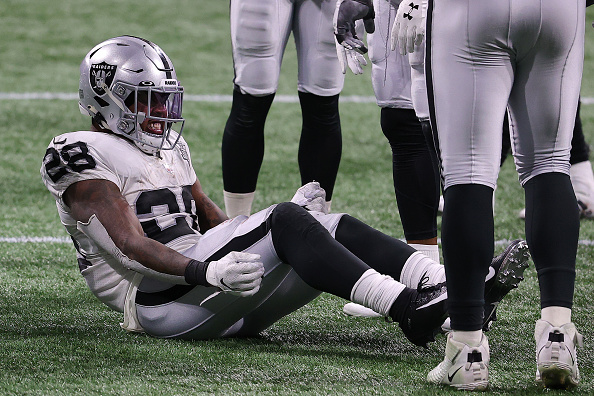 Jacobs sustained an ankle injury in the Raiders Week 12 loss to the Falcons and now is listed as “questionable” to play in their upcoming Week 13 game against the Jets on Sunday. After some medical evaluations performed by the team med staff, it appeared as if Jacobs was able to avoid any major set-backs in terms of the severity of the ankle issue, but he isn’t exactly out of the woods yet. Monitoring his practice report notes over the course of the week should give us a better idea of his chances of taking the field on Sunday.

The same hammy that Jones has been dealing with in multiple prior weeks to this week is still giving him problems. The hamstring strain held Julio out of the Falcons drumming of the Raiders last Sunday and now also may have him in jeopardy of missing their Week 13 game against the Saints at home on Sunday. There has yet to be any new reports for Julio entering the week, so hopefully we will have a bit more clarity on Friday’s report.

We saw how sorely missed Swift was for the Lions in their Thanksgiving day loss to the Texans. Being the second-straight game missed by Swift, the concussion issue he is facing seems to be a bit more severe than expected. However, the reports from last week did mention he had made progress through the protocol, but ultimately was not cleared to play on Thanksgiving. Hopefully Swift is able to continue to progress and be cleared to play in the Lion’s upcoming match against the Bears in Week 13.

Another Lion dealing with multiple week injuries is Kenny Golladay . Golladay continues to deal with a hip-pointer that has now taken four games away from Golladay recently this season. We have yet to get a new report about Golladay’s progress with the injury, so hopefully we will have a bit more clarity into the situation when Friday’s report is due. We will monitor the Lions’ practice reports for multiple players it seems.

Chark was not able to practice in the latter part of Week 12 in which solidified his absence for the Jags during their Sunday loss to the Browns. It was pretty clear that Chark had not made any progress with the rib injury after missing back-to-back practices and was not able to take the field. We have yet to get a new report on his status heading into Week 13, but hopefully by Friday we will have a handle on his availability for the Jags’ upcoming game against the Vikings on Sunday. Good news is this is the early start game on Sunday, so we will have that information at least by kick on Sunday. 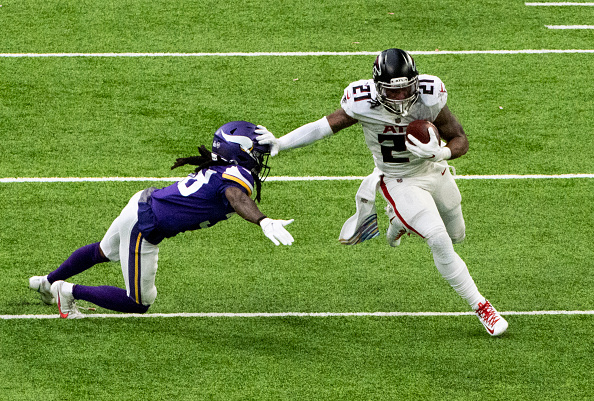 Gurley was held out of the Falcons win against the Raiders on Sunday with a knee injury. Gurley was unable to take the practice field in any capacity in preparation for Week 12, and there has yet to be a new report detailing the severity of the knee injury to begin preparation for Week 13 as the Falcons will play host to the Saints on Sunday. This is a status we will look to keep an eye on and have a better report on by Friday.

Ahmed was one of a few running backs that were not able to take the field for the Phins during their Sunday win over the Jets. Ahmed is dealing with a shoulder injury that would not allow him to take the field, so the running back snaps were disbursed between DeAndre Washington and Matt Breida . With Myles Gaskin close to a return from the IR, this situation at the running back for the Dolphins could get a bit interesting in the event that both Gaskin returns, and Ahmed can play in Week 13. The Dolphins will host the Bengals on Sunday, and we should have a more clear picture of how this backfield will look by Friday’s injury report.

It was reported by Head Coach Vic Fangio that Lindsay is dealing with a “mild knee injury” and that the hope is he will be available to suit up for the Broncos Week 13 match against the Chiefs in Arrowhead. Lindsay was unable to finish the Broncos Week 12 tilt against the Saints, and looks as if he has avoided any set-backs in time going forward. We will continue to monitor his status heading into the latter part of the week.

There is lots of optimism about the return for Tua on Sunday in Week 13 when the Phins play host to the Bengals. After reports from last week were concerned that Tua could likely miss “multiple weeks” it seems as if those were just rumors and this is not the case. The main factor that kept Tua out of Sunday’s Week 12 game against the Jets was the swelling of the injured thumb in question. The outlook is that with the extra time to heal and recover for Tua, he will be available to retake the field with just a one-game absence. 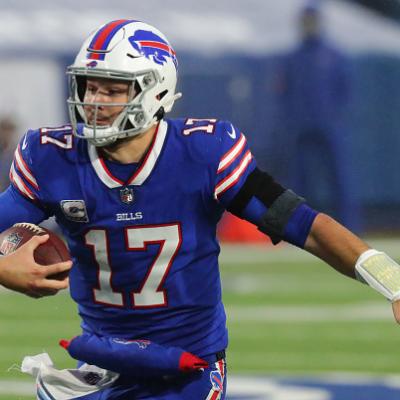 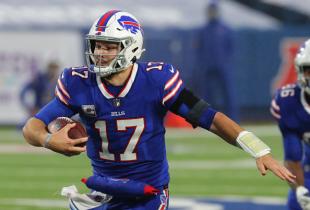 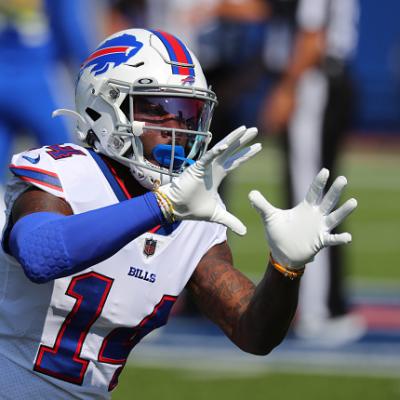 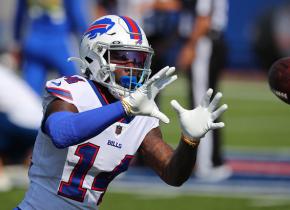 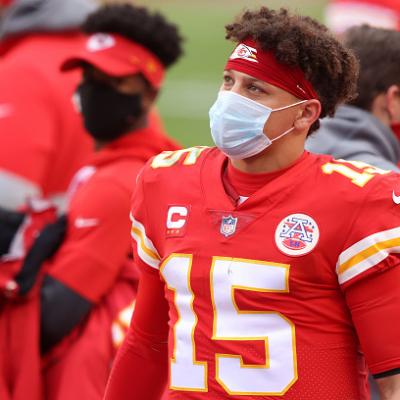 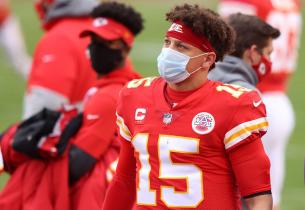 NFL Mahomes still in protocol, took all the reps Wed.

P. Mahomes - QB
KC1
Patrick Mahomes (concussion) was limited in practice Wednesday.
The Chiefs initially called him a full participant and coach Andy Reid even said Mahomes "took all the reps", but a player can't be listed as a full participant while in this stage of the NFL concussion protocol and this was more of a walkthrough than actual practice. It's all semantics really. Ultimately, Mahomes is on track to start the AFC Championship but could need until Friday or Saturday to be officially cleared. In addition to his concussion (or neck injury), Mahomes is dealing with a toe injury that limited his dual-threat abilities last weekend.
Added 6:13 pm (EST)
Added 6:13 pm (EST)

C. Beasley - WR
BUF1
Cole Beasley is absent from the Bills' injury report for the AFC Championship Game.
Beasley had a doughnut against the Ravens, but it wasn't because he suffered a setback with his knee. For Sunday's title bout, Beasley will be rematching with a Chiefs defense that held him to 4/45/1 in a windswept Week 6 loss. With Gabriel Davis (ankle) not practicing, another Beasley zero isn't going to be an option for a Bills team trying to advance to the Super Bowl for the first time in almost 30 years.
Added 6:06 pm (EST)
Added 6:06 pm (EST)

S. Watkins - WR
KC1
Sammy Watkins (calf) practiced Wednesday.
Watkins missed the Divisional Round win against the Browns, but this is an upgrade from his practice round of DNPs last week. Watkins appears to be headed in the right direction, but Thursday is the key day for him.
Added 2:31 pm (EST)
Added 2:31 pm (EST)

P. Mahomes - QB
KC1
Coach Andy Reid said Patrick Mahomes (concussion) remains in the league's protocol but "took all the reps" at Wednesday's practice.
Mahomes is going to play in the AFC Championship game. Look for the Chiefs to ramp him up as the week proceeds.
Added 2:27 pm (EST)
Added 2:27 pm (EST)

R. Stanley - OT
BAL
Ravens coach John Harbaugh said LT Ronnie Stanley (ankle) should be ready for training camp.
Stanley is two months removed from surgery after breaking his ankle in Week 8. He'll likely miss the entire offseason but the Ravens are hoping to have him for the start of camp. Pro Football Focus' No. 2 pass blocker before going down, Stanley will be entering the second season of a five-year, $98.75 million contract in 2021.
Added 12:29 pm (EST)
Added 12:29 pm (EST)

L. Jackson - QB
BAL1
Ravens coach John Harbaugh said he's "totally certain" the Ravens will sign Lamar Jackson to a long-term extension.
“Eric [DeCosta] and I have talked about that and other contracts, so I’m very confident that Eric and those guys will do a great job,” Harbaugh said. “Absolutely, we want Lamar to sign a long-term deal and be with us. I’m totally certain that’s going to happen. When it happens, that’s the details. That’s what we’ve got to figure out.” Harbaugh was commenting on a report that the Ravens plan to explore an extension for Jackson this offseason. Baltimore is a lock to pick up Jackson's fifth-year option in May.  There's optimism the sides can reach a long-term deal before next year's training camp.
Added 11:40 am (EST)
Added 11:40 am (EST)

P. Mahomes - QB
KC1
Patrick Mahomes (concussion) will have a "light practice" Wednesday.
Mahomes has "no symptoms" but remains in the concussion protocol. He'll likely be listed as limited or DNP. The Chiefs plan to ramp up Mahomes's reps later in the week. Mahomes is also dealing with a foot injury, but this puts him on track to start in the AFC Championship against the Bills.
Added 10:51 am (EST)
Added 10:51 am (EST)