Ryan Hallam goes beyond the top-12 quarterbacks to give you targets in superflex leagues for Fantasy Football. 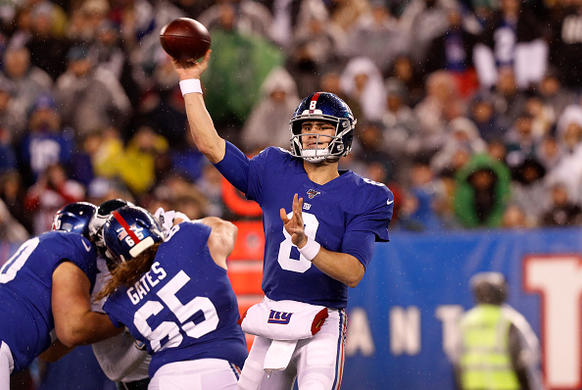 There may be no type of fantasy football league growing in popularity as quickly as superflex leagues. For those who are unfamiliar, while the flex position in most leagues are limited to running backs, wide receivers, and tight ends, superflex leagues add the ability to play a quarterback in your flex spot. And while almost every industry article/podcast/video tells you to wait on drafting quarterbacks, superflex complicates things some. Quarterbacks score the most points in fantasy football, so the ability to play two is always enticing even if your second isn’t great. Sure, the quarterback position is fairly deep for but, you don’t want to have two duds in a league like this considering you could also run into injuries during the year. Let’s take a look outside of the top-12 quarterback in ADP to find who your top targets might be in your superflex leagues.

Daniel Jones, New York Giants. His rookie season started with a ton of fanfare as he had a huge game against the Buccaneers with four touchdowns and “Danny Dimes” was born. Turnovers, especially fumbles (18 fumbles; 11 lost) doomed a lot of his future games, but Jones had three more games with four or more touchdowns, and threw for 300 yards five times in his rookie season, including the final two games of the year. There is a world of talent here, and the Giants have a good complement of weapons for the young quarterback to use. He is going to have to get his turnover problem under control, but Jones has a real chance of being selected later in drafts but returning top 12 quarterback production. He will be my target for my second quarterback in any superflex league I am in this season.

Baker Mayfield , Cleveland Browns. It is well documented how much of a disaster last season was for the second year quarterback in Cleveland, and his turnover issues were massive. However, the former number one overall pick still showed glimpses at time, and the talent is there. He still has a great tandem of receivers in Odell Beckham and Jarvis Landry , and both running backs are more than capable of catching the ball out of the backfield. The Browns loaded up more in free agency with offensive tackle Jack Conklin to try to give Mayfield more time, and signed the top free agent tight end in Austin Hooper to give him yet another weapon. Mayfield isn’t going to throw for 35 touchdowns or 5,000 yards, but he will be undervalued on draft day and is certainly someone to consider as your superflex option.

Ben Roethlisberger , Pittsburgh Steelers. Hey, remember this guy? Before losing almost all of last season due to injury, Big Ben had 91 touchdowns in the previous three season. Sure, Le’Veon Bell and Antonio Brown are now gone, but Diontae Johnson and James Washington certainly matured into better players last season with awful quarterback play. Give him JuJu Smith-Schuster back healthy and the Steelers added Eric Ebron at tight end, and this offense should be in business. Roethlisberger is likely to be severely discounted this year because of his age and the fact that he is coming off an injury, but he can still sling it. The Steelers focused on the run last year because they had to, but Roethlisberger has thrown in 500+ times in five of his last six healthy seasons. There is a bit of a risk with him, but he has a good chance of giving you a strong return.

Ryan Fitzpatrick , Miami Dolphins. Like Frosty the Snowman’s hat, there is still a little bit of magic left with Ryan Fitzpatrick . The 37 year-old signal caller took control of the Dolphins starting job after their Week 5 bye and ran with it for the rest of the year. When you combine his “ability to run” the ball, Fitzmagic had eight multi-touchdown games in the last 12 games of the season. Miami will likely look to run a little more with the signing of Jordan Howard , but that also should help force the defense to not just drop back into pass coverage 100% of the time. Miami also had a litany of injuries to their wide receivers last season, so having DeVante Parker back for another year with a healthy Preston Williams and Albert Wilson should have him in line for an even better year.

Philip Rivers , Indianapolis Colts. There are questions of his durability and arm strength anymore, but the move to Indianapolis should help Rivers a lot. The biggest help for Rivers should be the great offensive line that the Colts have. He was running for his life a lot of last season, and rarely had time to throw routes that took any time to develop. The Colts will have a virtual force field in front of him which should help Old Man Rivers stay upright more. A healthy T.Y. Hilton should also help Rivers production. He didn’t look great last year, but Rivers can still throw the deep ball, and Hilton should be his top target. He has a great weapon in Nyheim Hines as a pass catcher out of the backfield as well. Rivers still had eight 300 yard games last season with nine multi-touchdown games. He is another guy who will be written off by a lot of fantasy football players this season that can still produce.

Ryan Tannehill , Tennessee Titans. He didn’t start a full game until Week 7, but once he got under center the Titans season completely turned around. Tannehill had at least one passing touchdown in every game but one in the regular season, even though his yardage totals weren’t always impressive. He also ran for almost 200 yards in just ten regular season games, so he gives you a little added bonus there as well. He doesn’t have a plethora of good weapons after second year man A.J. Brown, but Tannehill just spreads it around to everyone and makes it work. He is certainly helped by the fact that defenses have to sell out against the run to try to stop Derrick Henry , which makes playing quarterback a lot easier. He isn’t my favorite quarterback, but his consistency from week-to-week make him a very attractive second quarterback since you often know what to expect from him.

Jimmy Garoppolo , San Francisco 49ers. Yes, we all remember the playoff games where the Niners ran the ball so much that Garoppolo barely had to break a sweat, but you need to look at the whole regular season. Sure, the 49ers are a running team, but if you lose sight of the season you will miss that Garoppolo threw 27 touchdown passes, which was tied for fifth in the league and he finished as the QB14 last season. San Francisco is likely to draft a top flight receiver in the first round of this year’s draft, and will get last year’s third round pick Jalen Hurd back from missing all last season with injury. And of course, you can’t forget the “People’s Tight End” George Kittle who is just getting better all of the time. Garoppolo will certainly have his stinkers from time to time, but he is a great option as your second quarterback in a superflex.

Joe Burrow, Cincinnati Bengals? He is all but assured to be the first player taken in the upcoming NFL Draft by the Cincinnati Bengals. Although it hasn’t happened yet, it is the worst kept secret in football. Burrow had a dream senior season at LSU capped off by winning the National Championship. For purposes of this article we are going to assume he goes to Cincinnati. The Bengals don’t have a great offensive line, but they do have a solid running back in Joe Mixon , and three solid receivers in A.J. Green , Tyler Boyd , and John Ross . Burrow certainly showed the ability to chuck the deep ball in college, and Green and Ross are great at coming down with those. Given the depth at the position and the fact that he is a rookie, Burrow isn’t likely to be drafted too high, but if a few things go his way he could be in for a 25 touchdown pass rookie season.

M. Stewart - DB
TB
Bucs waived CB M.J. Stewart.
The No. 53 overall pick of the 2018 draft, Stewart's Bucs career was plagued by injury and ineffectiveness. He missed six games with a foot issue in 2018 and five with a knee in 2019. One month shy of his 25th birthday, Stewart's second-round pedigree means he is typically the type of player who would get a second chance, but roster spots are at an extreme premium this year.
Added 5:08 pm (EST)
Added 5:08 pm (EST)

C. Rogers - WR
IND
The Miami Herald reports free agent Chester Rogers has worked out for the Dolphins.
As has Ricardo Louis. With Allen Hurns and Albert Wilson both opted out, the Dolphins are severely shorthanded at receiver. This is the first we have heard of Rogers since he fractured his kneecap early last December for the Colts. The owner of 111 catches over the past four years, Rogers also offers special teams value as a return man.
Added 4:44 pm (EST)
Added 4:44 pm (EST)

J. Doctson - WR
NYJ
Jets WR Josh Doctson has opted out of the 2020 NFL season.
Doctson was among a handful of players who opted out just before the 4 p.m. deadline. A former first round pick, Doctson would not have been a fantasy factor this season barring a rash of Gang Green wideout injuries. Doctson played in one game for the Vikings last year after three disappointing seasons in Washington.
Added 4:34 pm (EST)
Added 4:34 pm (EST)

M. Crosby - DL
LV
Raiders placed DE Maxx Crosby on the reserve/COVID-19 list.
It's unclear if Crosby has coronavirus or has merely come into contact with someone who does. The No. 106 overall pick of last year's draft, Crosby had a sensational rookie year, registering 10 sacks and four forced fumbles. He still has over a month to get conditioned for Week 1.
Added 4:27 pm (EST)
Added 4:27 pm (EST)

K. Vaughn - RB
TB1
Bucs activated RB Ke'Shawn Vaughn from the reserve/COVID-19 list.
RB Raymond Calais and RB Aca'Cedric Ware also came off the team's COVID-19 list. Vaughn returns to action a day after Bucs HC Bruce Arians said RB Ronald Jones would be the "main guy" in the Tampa backfield. Vaughn's ADP has dipped into the eighth round of 12-team leagues. With a further ADP drop, the rookie is shaping up as a solid stash in redraft leagues, especially for those who don't put much stock in Arians' backfield proclamations.
Added 4:21 pm (EST)
Added 4:21 pm (EST)

S. Coleman - OT
SF
49ers OT Shon Coleman has opted out of the 2020 season.
A cancer survivor, Coleman is likely a "high-risk" opt out. 2020 will be the third straight year Coleman fails to play a down for the 49ers. He missed all of 2019 with a devastating leg/ankle injury. Three months shy of his 29th birthday, Coleman doesn't have much of an NFL future.
Added 4:19 pm (EST)
Added 4:19 pm (EST)

T. White - DB
BUF
Bills CB Tre'Davious White will not opt out of the 2020 season.
White was the biggest name being bandied about, but the opt out deadline ended up coming and going with little fuss. White's absence would have been a season-altering event for a Bills team in prime position to win the AFC East.
Added 4:14 pm (EST)
Added 4:14 pm (EST)