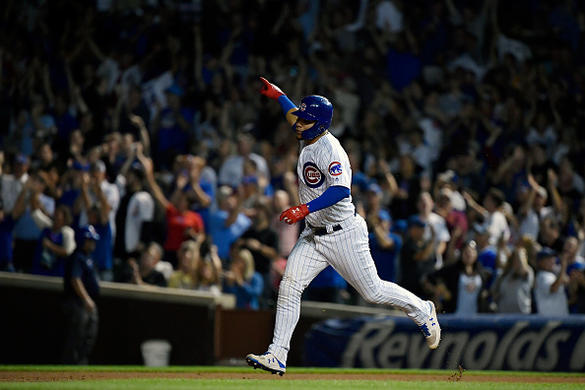 When I first brought the idea of the Fly Index to Brian Creagh in 2019, I wasn’t entirely sure there would be anything to write about in 2020. Producing a new baseball metric is like trying to create new weather pattern analysis. It is doable, but most of the quality analysis is already being done. Brian found something credible in the data, though. Our analysis yielded results in 2019, giving credence to power breakouts like Max Kepler , Paul DeJong , Mitch Garver , and Alex Bregman . So here we are looking to unearth more gems in 2020.

When Brian broke down the 2019 Fly Index data we found that the metric remains predictive.  Most hitters who succeeded in 2018 in Fly Index, hit for great home run-rate in 2019. 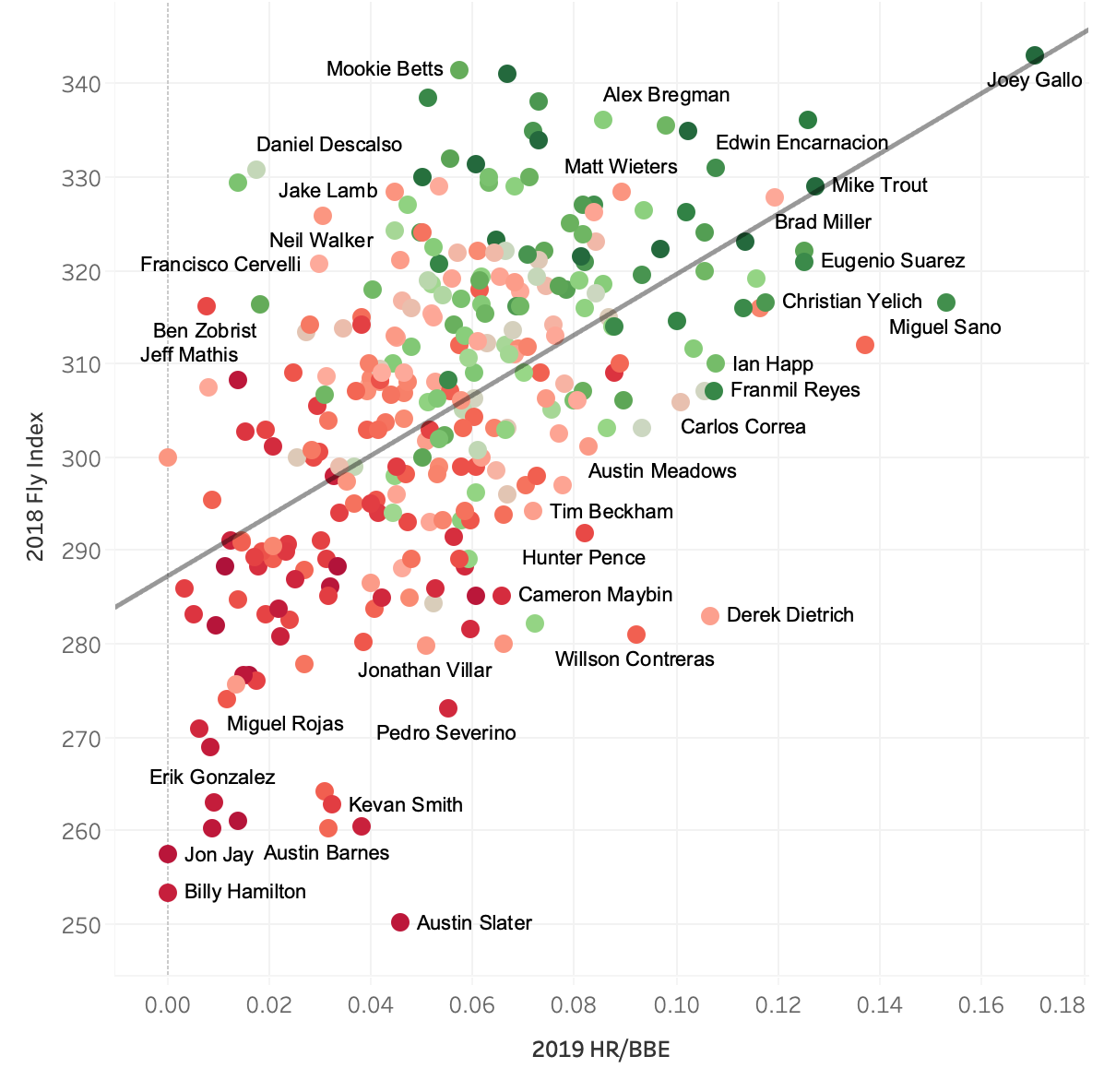 A bulk of the players that didn’t maintain their HR/BBE with a high 2018 FI were injury-related.

In-Season, the metric was also successful at predicting second-half success (defined by games after July 1st). 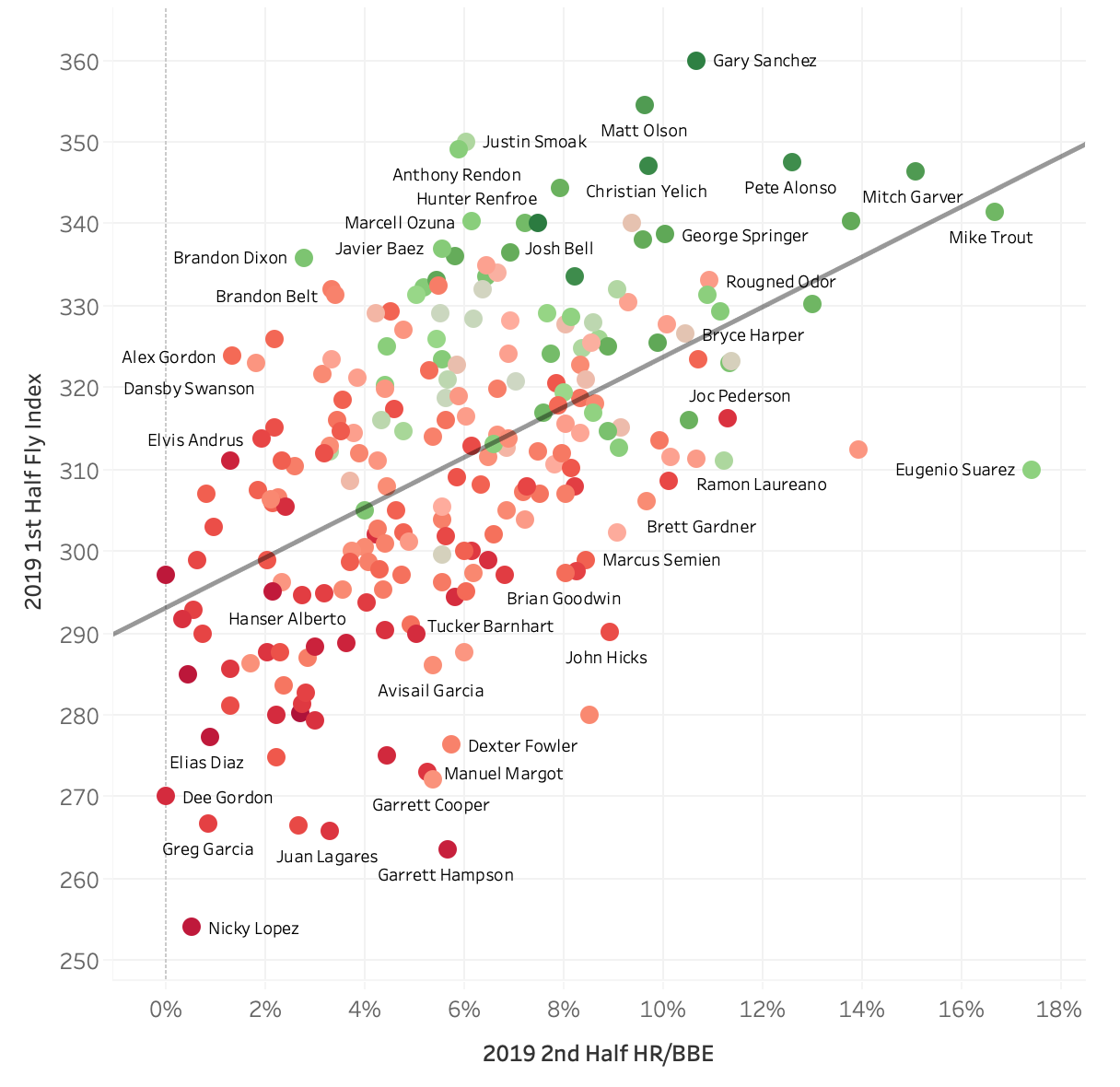 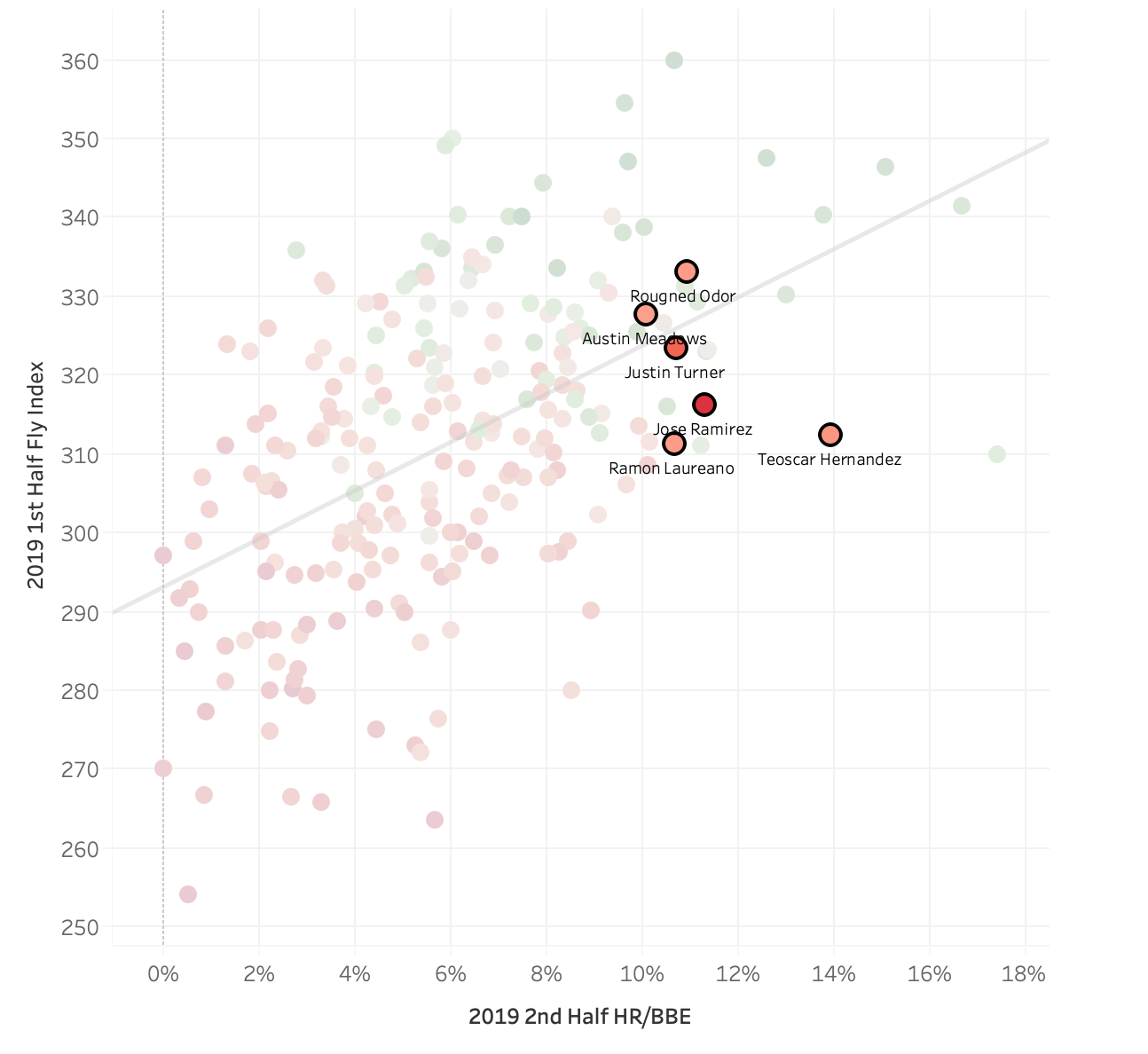 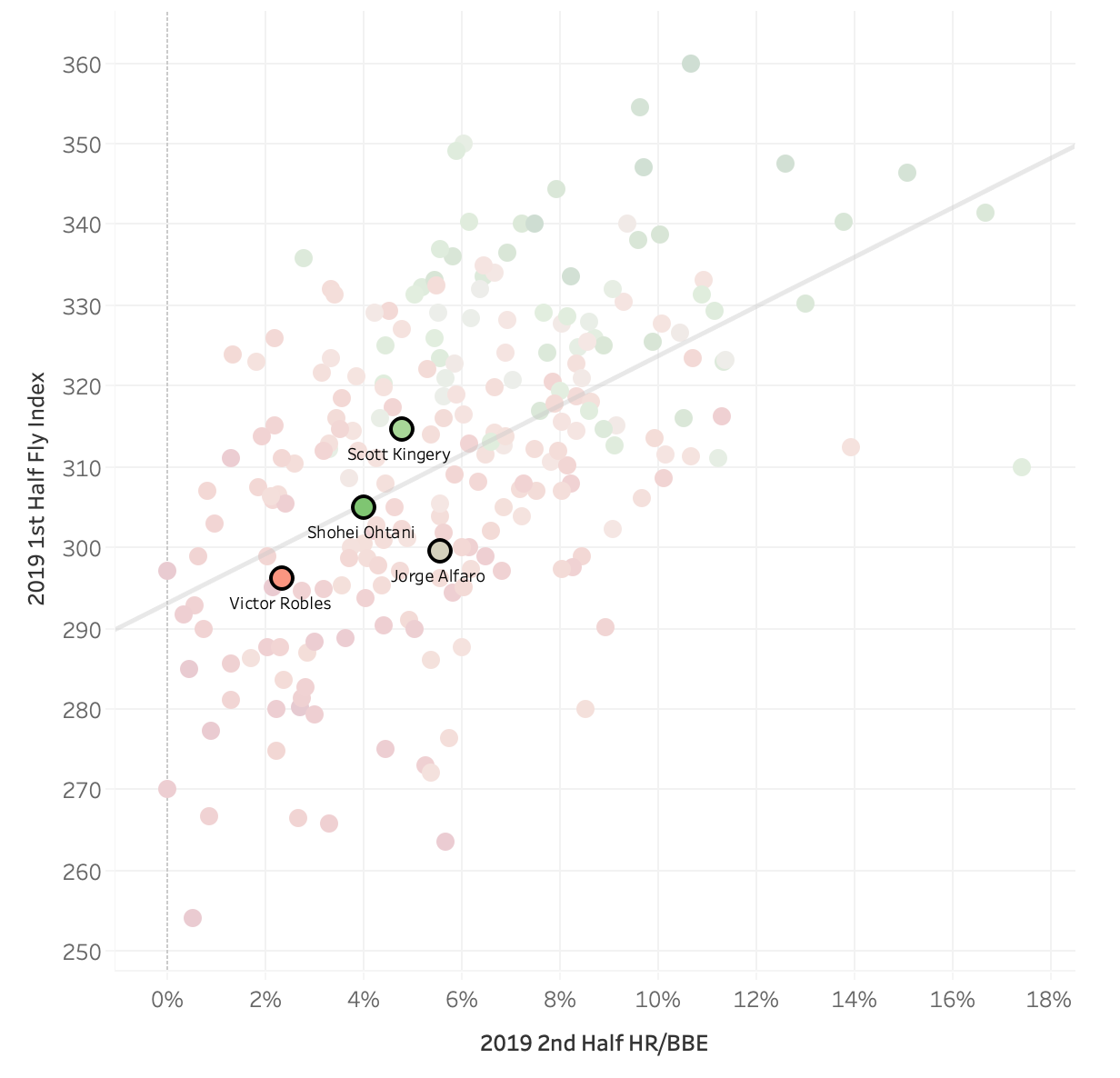 Here’s the Fly Index Leaderboard from 2019 for players with a minimum of 149 BBEs. 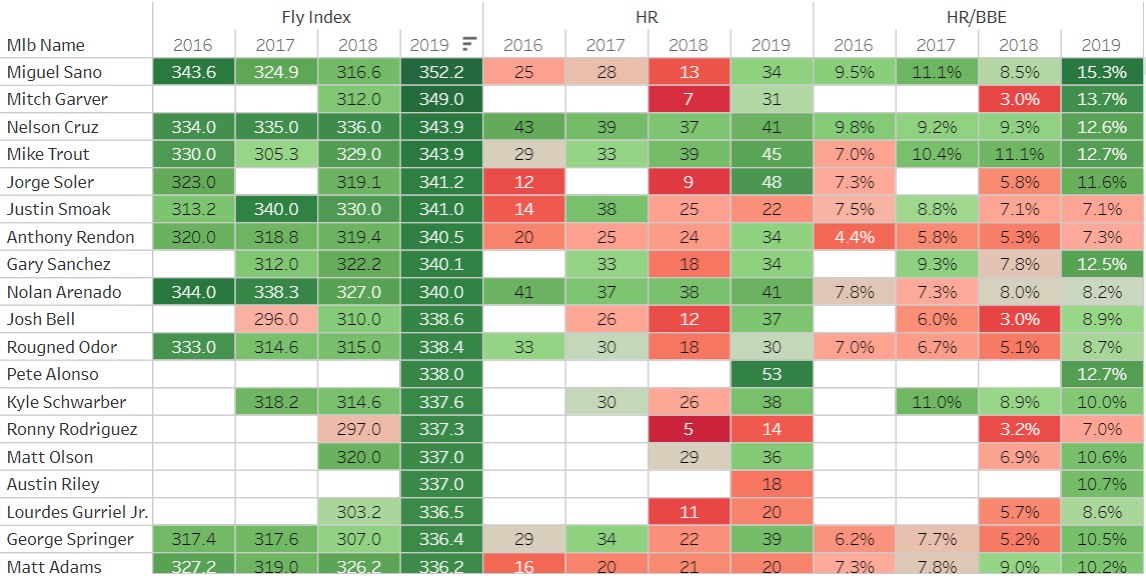 We see plenty of players posting career highs for Fly Index. This holds constant down through the list. It’s a safe assumption that the juiced ball is somewhat to blame, and we’re stuck guessing what ball MLB will provide for the coming season. The approach I’ve seen that makes the most sense is to factor in some regression in an environment that is still above average for fly ball distance. I should note that the leaderboard raw numbers are not all that much different from 2018's. Players having career years post excellent batted ball metrics.

Some buys based on their 2019 Fly Index increase: 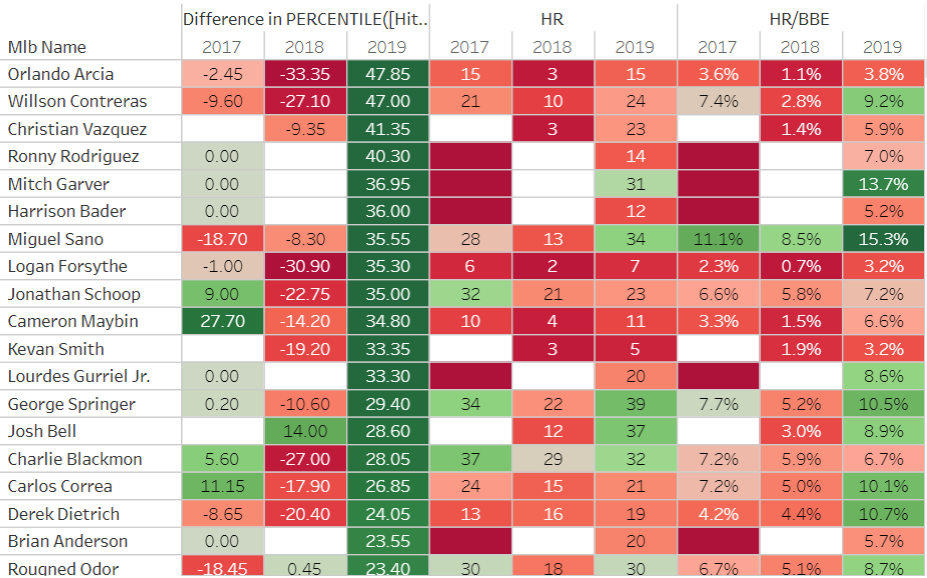 A note on sign stealing. I don’t want to cast aspersions on any players or teams using this data just yet. We haven’t fully analyzed it in that regard. I will say that I am fairly shocked that the top three on the Fly Index leaderboard are also Minnesota Twins. It could simply be a team philosophy on plate approach and matching skill sets of fly ball hitters. There is also the possibility that someone like Marwin Gonzalez brought a trade secret over with him from Houston. I would encourage some slight measure of caution on players that have a reason for skepticism given that we only saw the tip of the sign-stealing iceberg in MLB. Now that those tricks are going to be actively policed some teams and hitters may regress for seemingly no reason. We’ll likely never know the full extent of this scandal or what effect it had on individual hitters and pitchers. The best we can do is to prepare to react quickly if someone slumps for suspicious reasons this season.

Brian and I will be checking in with the Fly Index throughout the season in the Advanced Analytics post right here on Fantasy Alarm!