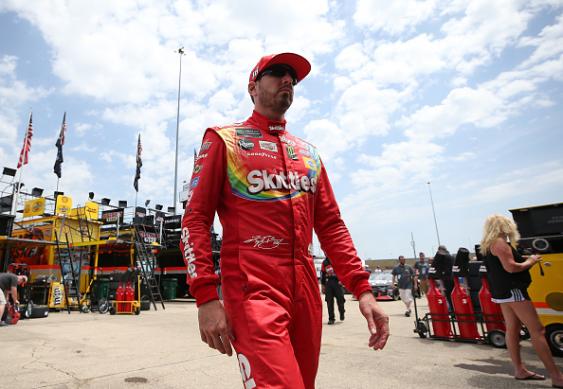 The Magic Mile, a.k.a. New Hampshire Motor Speedway, is hosting its lone Cup race this weekend in the form of the Foxwoods Casino 301. There are 301 laps scheduled around this 1-mile flat track that has minimal banking in the corners and resembles a Martinsville that’s twice the size and slightly wider corners. This is a track where short track racing is more in play and intermediate style racing takes more of a back seat. So expect long runs with the same driver in the lead and some beating and banging, as we saw last year coming to the finish between Kevin Harvick and Denny Hamlin. So let’s start looking at the favorite bets for Sunday’s race.

Kevin Harvick +350 - Harvick is once again the odds on favorite this week...I know shocker right? He’s won three of the last five races here including the last two July races and used great pit strategy to get the car up front late in the race in those wins. That’s been a strength of the 4-car team this year with in-race adjustments being key with no practice sessions and that’s why they’ve flourished, in addition to having the fastest car most weeks.

Denny Hamlin +425 - Hamlin nearly won here last year going side-by-side with Harvick in the final corner but coming up just short. He does have a win here previously and has been a great pick most weeks to have a very competitive car. Starting P2 gives him a great shot at staying near the front throughout the race and presuming he has the setup correct, or can adjust it better than they did a few weeks ago, Hamlin is a great pick to add to his already series-leading wins total.

Kyle Busch +550 - Busch, or KFB as he’s calling himself these days, has been ticking in the right direction the last few races and led a season-high number of laps at Kansas last race. Busch and JGR in general have been very good here over the last several years and this track fits Busch’s driving style as well. There’s only been one other season where he’s not had a win after 19 points races and in that season he picked up the first win in the 20th race, which would be this weekend’s race.

Martin Truex Jr +700 - Truex has three top-fives in the last four races here and has the best average finish in the last four races as well. Truex should be a factor all day as he tries to notch his first win at a track that he’s never won at before and just keep in mind his recent successes at Martinsville and Richmond, two tracks that can be compared to New Hampshire in terms of driving style.

Aric Almirola +1500 - Almirola is on the pole for Sunday’s race and pole-sitters have won an eighth of the time in the 48 Cup races at this track. In the last eight points races, Almirola has eight top-10s and five of those are top-fives while leading more than 200 laps as well. The 10-car has been fast and Almiriola is looking to lock in his spot in the playoffs with a win and is in the catbird seat to start the race on Sunday to notch his first win in a year and a half.

Matt DiBenedetto +3500 - DiBenedetto loves shorter tracks. Lives for them, and it shows. His performances at short tracks are far better than basically any other style and that goes for New Hampshire as well where he got a top-five in last July’s race here. He was in a Toyota last year, but a typically 25th or worse Toyota, as compared to being in the 21-car for Wood Brothers this year which is an uptick in equipment. DiBenedetto has been a threat for top-10s quite frequently this year at tracks that he doesn’t normally run well at and now comes the Magic Mile. He’ll need some good pit strategy but it’s quite possible he’s in position late to fight for a win.

Matt Kenseth +4400 - Kenseth has three wins at this track and was quite good here even up to his then-retirement a year and a half ago. It fits his methodical, rhythmic, driving style and picking him to do well at tracks he’s done well at previously since he’s come back has been a recipe for success to this point. He’s starting P21 on Sunday and nearly 21-percent of New Hampshire winners have come from outside the top-20 starting spots so it’s not far fetched he gets up there.

Christopher Bell +6600 - Bell won here twice in his two Xfinity series races and finished P2 and P1 in his two Truck series races as well. Now he was starting a lot closer to the front in those races than he is on Sunday as he’s starting P35 but the near 21-percent of winners from outside the top-20 stat from above also works for Bell. He’s proven he can finish inside the top-10 and even top-five when starting that far back, he’s had a lot of practice at it having started P32 or worse in nine of the 13 random draw qualifying races, so a track he’s had a great history at in the lower series isn’t a bad one to take a shot on longer odds that he can notch his first career Cup win and get you a nice pay day 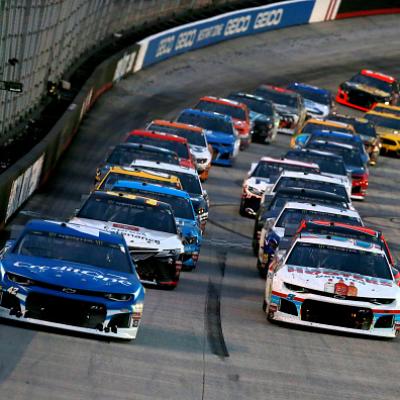 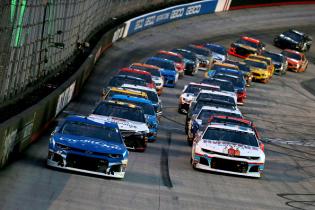 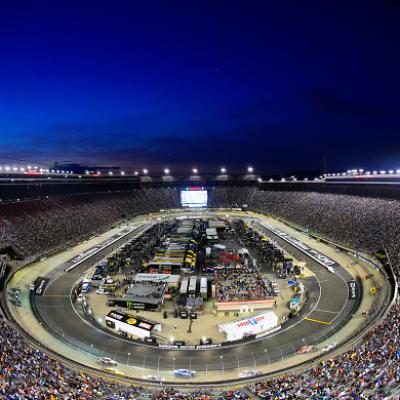 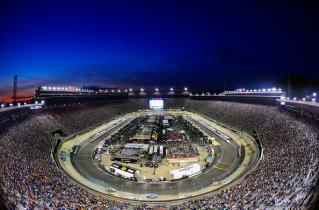 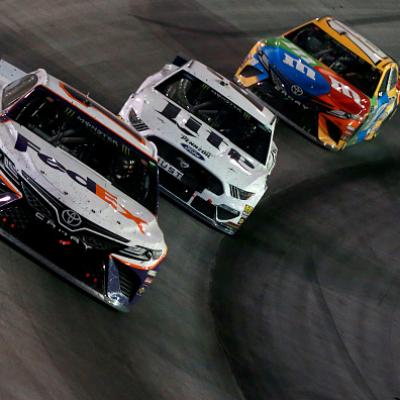 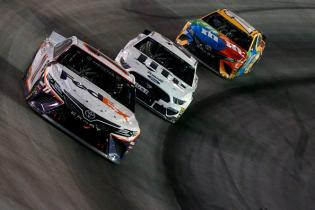 NASCAR Lupton back with DGR-Crosley starting at Las Vegas

NASCAR Kevin Harvick: Top Seed in CUP Series Round of 12

NASCAR Hamlin 21st at Bristol, on to NCS Round of 12

NASCAR Keselowski 34th at Bristol, on to NCS Round of 12

To. Gilliland - D
Friday night's Gander Truck Series race at Las Vegas will be the second race in the Round of 10 playoffs. After a tough night at Bristol last week, Todd Gilliland finds himself 10th, eight points below the cutline with two races remaining in this round.
A solid run, or better yet a win at Vegas will be just what the 20-year-old needs to stay alive for the next round. This will be Gilliland's fifth start at Las Vegas. He earned his best start and finish there in the fall race last year, starting third and finishing fifth. He finished seventh there in February in only the second race of the season with his new team, Front Row Motorsports. In 17 starts this season, Gilliland has four top-five, nine top-10 finishes and has led 92 laps in the No. 38 Ford F-150.-Front Row Motorsports
Added Yesterday 3:04 pm (EST)
Added Yesterday 3:04 pm (EST)

Jo. Nemechek - D
John Hunter Nemechek on Las Vegas: "As a driver, you always look forward to going back to a track you visited earlier in the year. You have a chance to look at what you did well and where you want to improve."
“With Las Vegas being the second race of the season this year, we were able to have a decent run, but we've made a lot of improvements since then and have really built up our mile-and-a-half program. I'm ready to go out and get a better finish than we had in February (finished 24th). I'm excited to have Speedy Cash on board our No. 38 Ford Mustang this weekend.”-Front Row Motorsports
Added Yesterday 2:38 pm (EST)
Added Yesterday 2:38 pm (EST)

Jo. Bilicki - D
NASCAR Cup Series driver Josh Bilicki and Rick Ware Racing will welcome Dollar Loan Center for the South Point 400 in Las Vegas this weekend.
With 51 locations around Nevada and Utah, the short-term lender was founded in Las Vegas over 20 years ago, and CEO Chuck Brennan is eager to see the No. 53 Ford Mustang on track. Bilicki has seen most of his NASCAR starts this season in Cup with 16. He ha drove a majority of his races for Tommy Baldwin Racing, while spending some time with Rick Ware and SPIRE. He placed 25th twice as his best finish this season at Indianapolis and Kansas.-TobyChristie.com
Added Yesterday 11:26 am (EST)
Added Yesterday 11:26 am (EST)

Bu. Wallace - D
Basketball legend Michael Jordan has purchased a NASCAR Cup Series Charter and Bubba Wallace will be the driver for ‘His Airness’ when the 2021 NASCAR Cup Series season begins.
Jordan, widely considered to be the greatest basketball player of all time and current owner of the NBA’s Charlotte Hornets, is now the majority owner of a NASCAR Cup Series team. Wallace, the series’ lone Black driver in the midst of a career-best season, has found a home after announcing earlier this month that he would not return to Richard Petty Motorsports. Also announced Monday was news that Denny Hamlin would also be a minority owner of the team. Hamlin has long been connected to Jordan through the latter’s Jordan Brand, and the two are close friends. Hamlin will remain a driver of the No. 11 Toyota for Joe Gibbs Racing, where he has six wins this year and is one of the favorites to win the 2020 championship. In addition to Hamlin, Jordan announced that Bob Germain will remain onboard as part of the new team after selling his charter. Germain has fielded the No. 13 car full time at NASCAR’s top level for nine seasons, with Ty Dillon in his fourth year with the team.
Added Sep 21 9:39 pm (EST)
Added Sep 21 9:39 pm (EST)

Ro. Chastain - D
Chip Ganassi Racing (CGR) announced that Ross Chastain will pilot the organization’s #42 entry in the NASCAR Cup Series (NCS) beginning in 2021.
Chastain, a CGR development driver since 2018, is currently competing full-time in the NASCAR Xfinity Series (NXS), where he qualified for the playoffs for a second time following a runner-up finish at Bristol over the weekend. For the driver known by many as “The People’s Champion” because of hard driving on the track and his humble manner and likability off the track, this will be his first time racing for CGR in the NCS, but not his first time competing as a member of the organization. He first competed for CGR in 2018, behind the wheel of the #42 in the NXS. In the three races Chastain ran for the team that year, he earned the pole award at Darlington, a win at Las Vegas, and a runner-up finish at Richmond, which helped him earn a spot in the NXS playoffs.-CGR
Added Sep 21 10:22 am (EST)
Added Sep 21 10:22 am (EST)

Ke. Harvick - D
Kevin Harvick (#4 Ford Mustang) won Saturday night's NASCAR CUP Series (NCS) Bass Pro Shops Night Race at Bristol Motor Speedway.
He started 4th in the lineup, led a race-high 226 laps and completed all laps of the 500 laps run. Since this was the elimination race for the Chase Round of 16, only the top 12 in the 2020 NCS point standings move on to the Round of 12. Harvick is ranked 1st after this event and will continue competing for the series title. He has 3,067 reseeded points, 19 more than 2nd-placed Denny Hamlin.
Added Sep 20 2:26 pm (EST)
Added Sep 20 2:26 pm (EST)