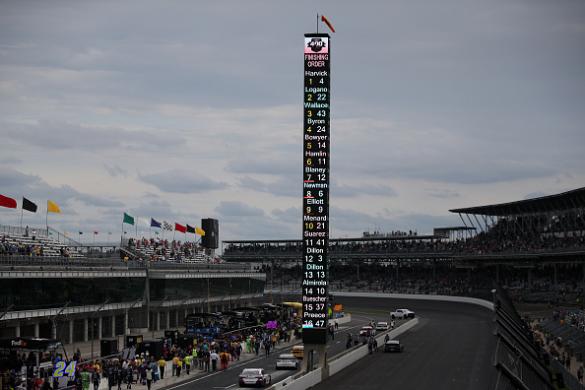 There is perhaps no more historic setting on the Cup schedule than when the stock cars come rolling into the rectangular oval of Indianapolis Motor Speedway. The Brickyard has been on the Cup schedule since the mid-90s making this the 27th race for NASCAR’s top series to be running here.

It’s a 2.5-mile layout that makes more of a rounded rectangle than a pure oval as the four corners are separated by the short chutes. Each corner is banked at nine degrees and the width of the track being wide enough for three-wide racing for sure and perhaps as wide as five-wide on restarts but typically after the restarts the field stretches out to single-file racing and passing cars one at a time.

Laps led have been a bit tricky here as in half the last six races there’s been one driver that’s led more than 100 laps and the other half, they’ve been split pretty evenly over several drivers. So it’s not a terrible idea to approach lineup construction in the same way with some builds focusing on one perhaps two dominators and the other builds spreading around the laps led picks throughout the lineup.

These charts show the average points scored by starting spot over the last four races here regardless of driver in those spots. 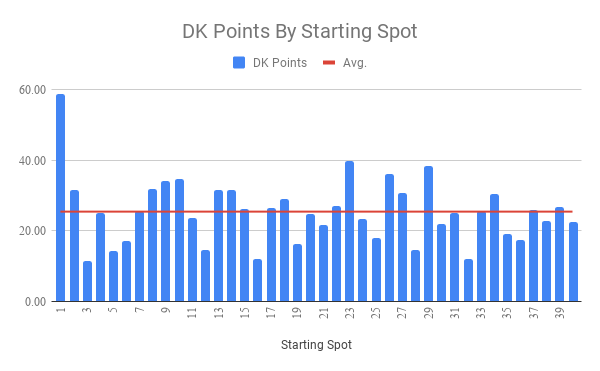 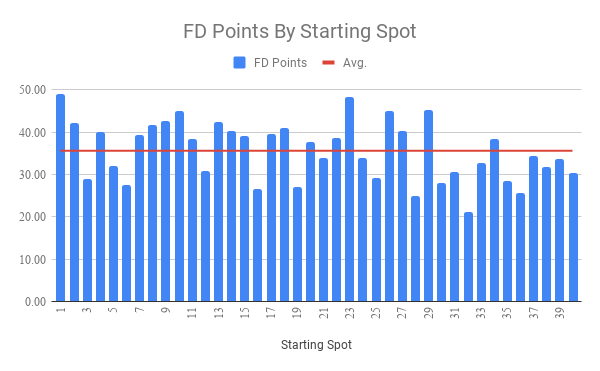 Ga. Smithley - D
Garrett Smithley will reprise his role as one of the rotating part-time drivers in the Rick Ware Racing NASCAR Cup Series stable for the 2021 season.
Smithley ran a total of 26 NASCAR Cup Series events last season (a career-high), 16 of them for RWR. Smithley’s best finish of 2020 was a 24th-place effort at Indianapolis Motor Speedway. This also marked his career-best finish in NCS competition.
Added 3:00 pm (EST)
Added 3:00 pm (EST)

Co. Lajoie - D
Spire Motorsports announced today Youtheory® will be the primary sponsor aboard the No. 7 Chevrolet Camaro with driver Corey LaJoie in the 63rd running of the Daytona 500.
The southern-California based manufacturer and lifestyle brand will promote its acclaimed Ashwagandha dietary supplement which, when used over time, combats stress and provides numerous benefits for the body and brain. LaJoie finished eighth in last year’s Great American Race and earned a career-best sixth-place finish at The World Center of Racing in the 2019 Coke Zero Sugar 400. The Concord, N.C., native has logged nine total starts at Daytona International Speedway (DIS) on NASCAR’s senior circuit, including eight on the traditional 2.5-mile superspeedway and one on the daunting 3.61-mile road course.-jayski.com
Added 2:57 pm (EST)
Added 2:57 pm (EST)

Br. Moffitt - D
CircleBDiecast.com will serve as the primary partner for Brett Moffitt to kick off the 2021 NASCAR Camping World Truck Series season at Daytona International Speedway.
In addition, the diecast retailer will adorn Moffitt’s No. 45 Chevrolet Silverado at Talladega Superspeedway later this season. Moffitt, the 2018 NASCAR Camping World Truck Series Champion and 2015 NASCAR Cup Series Rookie of the Year, has 12 wins, three poles and 39 top-five finishes in 82 career NCWTS starts. In addition, the Iowa-native has 46 top-10 finishes and has led a total of 1,190 laps in his three seasons of full time NCWTS competition.-Niece Motorsports
Added 2:47 pm (EST)
Added 2:47 pm (EST)

Al. Labbe - D
DGM Racing announced Monday that Alex Labbe will return to the team for the 2021 NASCAR Xfinity Series season.
Labbe, who competed full-time for the team last season, is seeking to run the full schedule again. In its Monday release, the team stated he is currently set to run half the races and that it will pursue additional funding to put him on track for all 33 races. BRP will support Labbe’s No. 36 Chevrolet for four races through its Can-Am brand. The 27-year-old Quebecois notched five top-10 finishes last season on his way to 14th in the Xfinity standings.
Added Jan 25 3:16 pm (EST)
Added Jan 25 3:16 pm (EST)

Jo. Anderson - D
Jordan Anderson Racing (JAR) announced today that the team will expand operations to race full-time in the 2021 NASCAR Xfinity Series (NXS) competing for Sunoco Rookie of the Year honors with owner/driver Jordan Anderson from Forest Acres, SC in the No. 31 Bommarito Automotive Group Chevrolet Camaro SS.
The team will operate under the Chevrolet banner with Richard Childress Racing acquired cars powered by ECR engines. Artie Haire will serve as crew chief for the organization after joining the team during the summer of 2020. The JAR entry will carry the No. 31 on both sides of the sleek red, white, and black Chevrolet Camaro SS. Bommarito Automotive Group will return for the sixth consecutive year as a primary marketing partner of Anderson. Details of other partners on the JAR No. 31 to be announced at a later date.
Added Jan 25 2:24 pm (EST)
Added Jan 25 2:24 pm (EST)