Matt Selz breaks down the starting spots and potential values to find the best DFS NASCAR plays for the Blue Emu 500 from Martinsville Speedway! 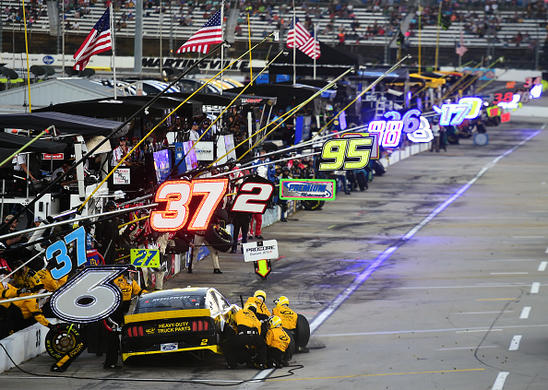 The paperclip beckons this Wednesday for another great edition of midweek Cup racing. Martinsville Speedway, the shortest track on the schedule, is just .526 miles in length and is a very flat half-mile with the exception of the 12 degrees of banking in the outer lanes of the turns. This surface is also an interesting one as it’s half asphalt and half concrete depending on where on the track you are and which lane you’re in and that makes the changing grip level a bit different throughout the race as asphalt and concrete take rubber and temp change differently.

Speaking of the tires, Goodyear is putting new tires on the cars this week that haven’t been run anywhere yet, aside from in a tire test under the lights here last July. They are designed to lay down more rubber, thus tire wear, and that means that tires will be a bigger part of the race than they previously have been at Martinsville. Also on the cars this week is the new aero package for 2020 on short tracks that was previously raced at Bristol and Phoenix that has provided some very good races already as the drivers can move around more and having clean air isn’t such a huge part of staying out front. What this also means for DFS is that there should be more spread out laps led totals, as you’ll see in the projections, than we’ve seen in the last few races here which is what we’ve already seen at Phoenix and Bristol.

We’ll do a version of the MCI, which could also stand for the Matt Confidence Index, for Wednesday’s race and we touched on it a bit in the podcast, but playing Cash games will be very tough to win actual money in for Wednesday, especially on DK, with how the pricing is done.

The core group of drivers you can use on DK will be highly-owned and thus push the cash line very high making it tough to hit double-ups and on FD the amount of laps and the fact that you can get a very similar build on there too makes the cash lines likely high and tough to make fruitful gains in when playing. There is enough differentiation in GPP builds that it makes the line easier to hit.

*At the end of each driver’s write-up I have included the Super Draft multipliers for them. For their site there is no salary cap, you just select drivers based on multipliers with a champion spot being 50% higher multipliers i.e. a driver that is 1x in the Flex spot is 1.5x in the Champion spot.

This is table shows how the starting spots stack up against each other over the last five races run here regardless of which driver is in that starting spot. It’s not a hard and fast rule to live by as each driver has different histories here, but it can be used to help in close decisions between similar drivers.

Ch. Elliott - D
Kelley Blue Book, The Trusted Resource for vehicle pricing and valuations, has extended its sponsorship of Hendrick Motorsports and 2020 NASCAR Cup Series champion Chase Elliott with a two-year contract renewal.
In 2021 and 2022, Kelley Blue Book will be featured as a two-race primary sponsor and full-season associate sponsor of Elliott’s No. 9 team. The company’s association with Hendrick Motorsports began with a one-race primary sponsorship in 2014 and expanded to two races in 2016 when KBB.com joined Elliott for his rookie year. Elliott, 25, will pilot the No. 9 Kelley Blue Book Chevrolet Camaro ZL1 1LE in the 2021 NASCAR Cup Series playoff races Sept. 11 at Richmond Raceway and Oct. 17 at Texas Motor Speedway.-Hendrick Motorsports
Added Yesterday 2:58 pm (EST)
Added Yesterday 2:58 pm (EST)

La. Cassill - D
Landon Cassill is set to make a return to the JD Motorsports with Gary Keller stables driving the No. 4 Chevrolet full time this NASCAR Xfinity Series season.
Cassill, who has driven for team owner Johnny Davis on a number of occasions over the years including full-time campaigns from 2013 to 2015, looks to break back into the spotlight after not competing in many races last season. The Iowa-native veteran sports a solid track record in NXS competition, with one Top 5 and fourteen Top 10 finishes throughout his career. Landon has also made over 300 starts in the NASCAR Cup Series, and brings a wealth of knowledge to the Gaffney-based race team.
Added Yesterday 2:56 pm (EST)
Added Yesterday 2:56 pm (EST)

Ma. Tifft - D
Tifft, whose NASCAR driving career was sidelined after an Oct. 2019 seizure at Martinsville Speedway, needs a ride to work because he’s not allowed to drive.
The co-owner of Live Fast Motorsports must go six months without a seizure before he can seek to drive again in North Carolina. It’s only been about 10 weeks since his last seizure — the seventh he’s had since that morning in Martinsville. Doctors diagnosed the 24-year-old with epilepsy last January, but it has taken Tifft since then to overcome his anxiety about the brain disorder and talk publicly about the diagnosis. His driving career on hold because of epilepsy, Matt Tifft became co-owner of the Live Fast Motorsports Cup team with B.J. McLeod. The team will makes its debut in the Feb. 14 Daytona 500.
Added Yesterday 2:53 pm (EST)
Added Yesterday 2:53 pm (EST)