Matt Selz studies the track, the drivers, the odds, and everything else to bring you the best bets for NASCAR's Supermarket Heroes 500 and the best plays for Monkey Knife Fight! 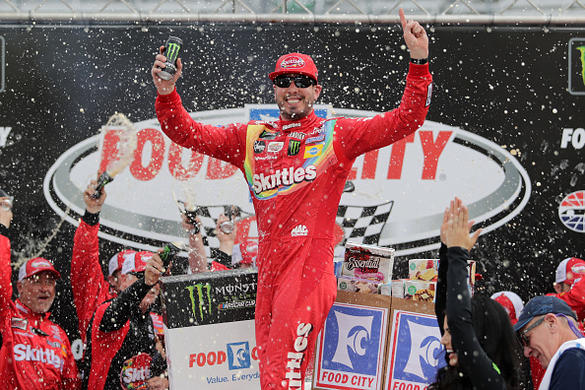 Bristol is on tap this Sunday for the first short track of the season. The Last Great Colosseum or Thunder Valley or The World’s Fastest Half-Mile or The Bullring as it’s known is a high-banked, concrete, half-mile track that keeps the speeds up and the passing space down. Things get chaotic on this short track and the drivers don’t have a chance to catch their breath until a pit stop or when the race is done. One small mistake can cause a several car pile up on the tight, narrow, racing surface.

Go to fantasyalarm.com/monkey to get your special offer when you use promo code: ALARM

Logano has a great shot to lead a bunch of laps on Sunday and finish pretty highly, that equates to a good day not only in DFS but also on Monkey Knife Fight.

Elliott doesn’t have the best track history here in the day race, which is typically run in the spring. He has had a fast car this year and is capable of leading laps, but he’ll have to do that and finish top-five to beat that point total. If they lower the point total on him to 16.5 of 15.5 then take the MORE.

Harvick has finished P7 or better three times in the last four spring races but hasn’t led a ton of laps in that span. He’s been consistent since the season resumed and has had a fast car. With him starting 8th he should be able to stay up near the front and lead some laps and get a top-five which gives him more than the 16.5 fantasy points needed. If it goes up to 17.5 think about taking the under.

This is a type of contest in which you are picking which driver of two will put up more fantasy points and one may have a handicap over the other.

In this contest, we need to get three of these four matchups correct to win and we can take some of what I wrote in the More or Less segment to derive picks but let’s break some of these down. Logano is the pick over Kyle Busch simply because the points you’re getting are too many in his favor and the consistency and laps led are there for Logano as well. Even though we’re getting a half a point in favor of Harvick, I’ll take Hamlin who won here last fall and has been a bit faster of late, not to mention Toyota’s have been better here recently. Brad Keselowski is the easy take over Bowman even with laying the points simply because Keselowski is on the pole and the laps led give him an advantage.

Kyle Busch (+450) - Busch has won the last two Spring races at Bristol and three of the last five races overall. He has eight wins at this track and would love to get his first win of the season at perhaps his favorite track to race at. However, if he’s not winning in the last four years in the Spring he’s wrecked out so there is risk here for a heavy favorite. Busch will start P7 and should have no trouble making it to the front pretty quickly.

Denny Hamlin (+750) - Hamlin won here last August and always seems to be a factor throughout the races. Even with the penalty levied before the last Charlotte race, he still moved up from P29 to finish P2 and his pit crew was arguably the best group on pit road. HIs abilities on short tracks are some of the best around and starting P10 still keeps him in striking distance for the win.

Ryan Blaney (+900) - Blaney always seems to be fast at Bristol until he gets caught up in an issue that isn’t of his making. He has been fast once again the last couple of races and is getting the finishes that speed deserves, as opposed to earlier in the season. Blaney is starting P4 and should be a constant force in the top-five all race long. Joey Logano is also at the same odds or near to Blaney and he’s a great bet to win as well starting P3 and having won here a couple of times in the past and always finishing in the top-10 the last four April races.

Matt DiBenedetto (+1900) - Matty D nearly won the race the last time they race here in August and he’s been very good at this track in general no matter the ride he’s been in. Now, he’s in the 21-car which is always fast at Bristol and combine that with DiBenedetto’s history here and his recent speed and the fact that he’s starting P9 and you’ve got a threat to win brewing here.

Clint Bowyer (+2500) - What if I told you that Bowyer has the best average finish in the last four Spring races at Bristol and one of the best place differentials as well? Would you believe me? Well, it’s true. He’s finished on average 6.3 and moves up well at the short track. He’s also shown a lot of speed since the return of cars to the track which makes these odds for Bowyer pretty tasty. It was also his birthday on Saturday so why not add to the celebration this week with a win.

Tyler Reddick (+4500) - Reddick is a rookie, however he has very good showings at this track previously in the Xfinity series and this package this weekend is taylormade to his driving style. He will get up along the wall and make speed where no one else on the track will go and that means he may be able to be a threat late in the race. He is starting P21, but winners have come from that far back in the past and just last year, Kurt Busch drove from 27th to 2nd.

Aric Almirola (+6600) - Almirola is starting P2 thanks to the random draw starting spots. Starting that close to the front is usually a great thing at a track like Bristol but Almirola hasn’t had the best of luck here hence the odds on him. If he can change his luck and stick up front, these odds will look a lot tastier later in the race.

Ryan Newman (+8000) - Newman has a number of top-10s to his credit here in the last four Spring races and he’s looked solid this year when starting just inside the top-20. With his history here and he’s known as a guy that can be tough to pass and a sneaky pit strategy team, why not throw a few bucks on Newman? 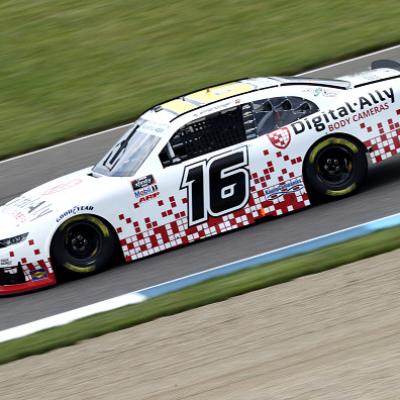 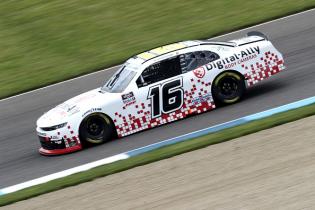 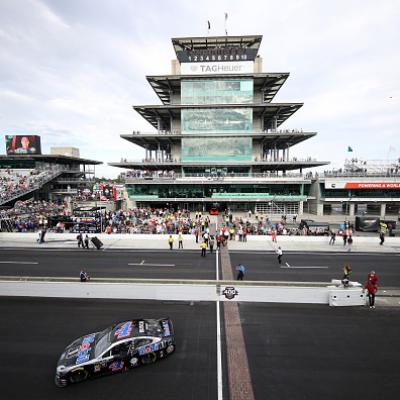 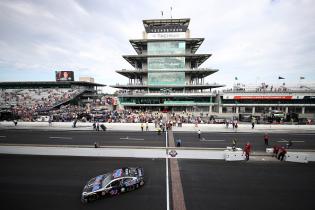 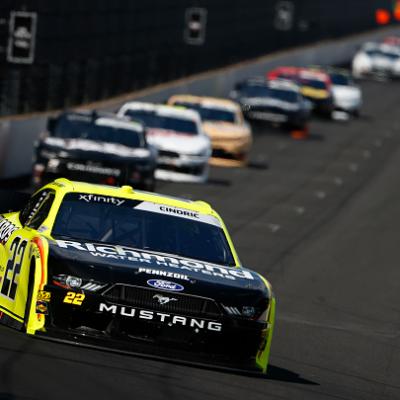 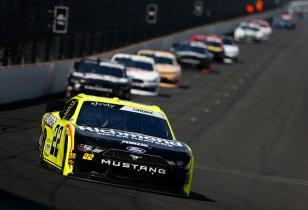 Ku. Busch - D
NASCAR Cup Series (NCS) veteran competitor Kurt Busch will make his 700th start in the NCS on Sunday July 5, 2020.  When the green flag drops on the Brickyard 400 at Indianapolis Motor Speedway, Busch will become just the 16th driver in NASCAR history to reach the 700-start milestone.
Joining the series full-time in 2001, the Las Vegas native burst onto the scene with an energetic personality and aggressive driving style that would rank him among the sport’s best, claiming the Series Championship in 2004.
Added Jul 01 8:34 pm (EST)
Added Jul 01 8:34 pm (EST)

Ju. Allgaier - D
Justin Allgaier has proven to be stout on road courses, having accumulated three wins, nine top fives and 19 top 10s in 28 NASCAR Xfinity Series starts.
Since joining JR Motorsports in 2016, Allgaier has earned two victories on road courses (Mid-Ohio 2018, Road America 2018) and has finished inside the top 10 in 11 of his 14 starts. The 34-year-old driver is looking to become the first NXS driver with both a victory on Indy’s road course as well as the oval. Allgaier scored a win at the historic track on its oval in 2018 after leading 41 laps. Allgaier earned his fifth stage win of the season last weekend at Pocono.-JRM
Added Jul 01 8:33 pm (EST)
Added Jul 01 8:33 pm (EST)

No. Gragson - D
Noah Gragson has four starts in the NASCAR Xfinity Series at road courses with a best finish of fourth coming in 2019 at Road America. On road courses in the NXS, Gragson has an average finish of 5.8 with three top fives and four top 10s.
In two previous starts on road courses in the NGROTS, Gragson has recorded one top five and two top 10s. After 12 races in the 2020 season, Gragson leads the way for JR Motorsports with two wins, seven top fives, nine top 10s and is currently second in the championship standings. The Switch colors are back on the No. 9 car this weekend for its first race of the 2020 season.-JRM
Added Jul 01 8:32 pm (EST)
Added Jul 01 8:32 pm (EST)

Je. Burton - D
Jeb Burton makes his third start this season behind the wheel of the No. 8 Chevrolet for JR Motorsports at Indianapolis. Saturday will mark Burton’s first start on a road course in the NASCAR Xfinity Series.
Burton has made four combined starts on road courses across the NASCAR Cup Series and NASCAR Gander RV & Outdoors Truck Series. Burton does have a best finish of fourth at the hallowed Indiana speedway, but that came on the oval in 2019. This will be the third primary race of 2020 for LS Tractor, one of the fastest growing tractor companies in North America.-JRM
Added Jul 01 8:30 pm (EST)
Added Jul 01 8:30 pm (EST)

Mi. Annett - D
Michael Annett will return to one of his favorite tracks this weekend, albeit on the Indianapolis Motor Speedway road course. In five starts on the oval, Annett has two top-10 results, the best a sixth-place effort in 2012.
The Iowa native enters the weekend on a bit of a run, having finished fifth at Pocono in the previous event. Annett is always around at the finish on road courses. In 1,447 laps of competition in the NASCAR Xfinity Series on current road courses, Annett has completed all but 10 laps. In 21 starts on road courses, Annett’s second-place run at Road America in 2017 is his best road course finish. He’s also amassed three top-10 results in that span.-JR Motorsports
Added Jul 01 8:24 pm (EST)
Added Jul 01 8:24 pm (EST)