Matt Selz pores over all of the stats, speeds, and qualifying spots to find the best DFS NASCAR plays for the Coca-Cola 600 at Charlotte Motor Speedway. 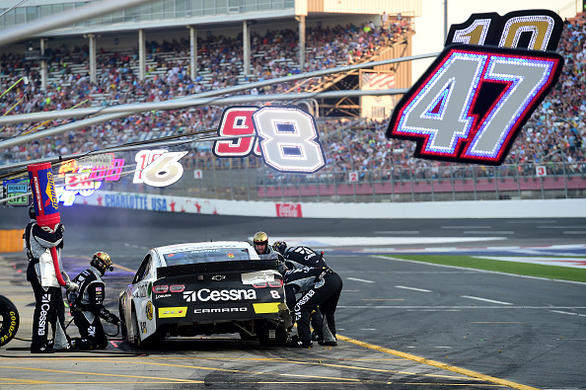 Welcome to an odd Memorial Day weekend. I know typically I’m at a family barbeque for more than 100 people as we remember the sacrifice of those that served this country valiantly. This might not be a normal-feeling Memorial Day weekend but one thing should bring some normalcy back to our lives and that’s the Coca-Cola 600 at Charlotte Motor Speedway in its traditional spot on the schedule and traditional time slot on Sunday. It’s the longest race of the NASCAR schedule at 600 scheduled miles for 400 laps around the 1.5-mile circuit of Charlotte. While the pageantry might be different, we still expect the same quality of racing from the drivers in this endurance test of man and machine.

Charlotte Motor Speedway is a quad-oval layout, meaning there are two turns in the front stretch much like Texas and Atlanta have, and the banking in the corners is 24 degrees in all four with the banking on the straightaways being at five degrees. This is the only race of the year with four stages instead of the typical three and each stage is 100 laps in length.

Driver fatigue will play a role in this race as will mechanical issues in the era of running wide-open for the whole race which puts a toll on the engine components and steering components. This is also the first time that this combination of tires is being used at this race, though the tires have been raced at other tracks previously just not with both sides together. The right sides were used at Darlington just this week and the left sides were used at Kansas last fall. Tire wear isn’t as big a part of the race as say at Chicago or Atlanta but it is more a part than it is at Texas or Vegas or Kansas.

If you need strategy pointers or any more info for setting lineups, listen to the podcast, or read the track breakdown, or rankings, and ask questions in chat or of me on Twitter at @theselzman or Dan at @RealDANlanta.

This isn’t a hard and fast chart by any means but it does give you an idea of how each starting spot has fared regardless of driver in that spot over the last five Coke 600s as well as the range of points that average comes from. Ideally you want a spot with a small range and high ranking, but again they aren’t set in stone that a driver starting there will perform that well or poorly.

Ch. Elliott - D
Kelley Blue Book, The Trusted Resource for vehicle pricing and valuations, has extended its sponsorship of Hendrick Motorsports and 2020 NASCAR Cup Series champion Chase Elliott with a two-year contract renewal.
In 2021 and 2022, Kelley Blue Book will be featured as a two-race primary sponsor and full-season associate sponsor of Elliott’s No. 9 team. The company’s association with Hendrick Motorsports began with a one-race primary sponsorship in 2014 and expanded to two races in 2016 when KBB.com joined Elliott for his rookie year. Elliott, 25, will pilot the No. 9 Kelley Blue Book Chevrolet Camaro ZL1 1LE in the 2021 NASCAR Cup Series playoff races Sept. 11 at Richmond Raceway and Oct. 17 at Texas Motor Speedway.-Hendrick Motorsports
Added 2:58 pm (EST)
Added 2:58 pm (EST)

La. Cassill - D
Landon Cassill is set to make a return to the JD Motorsports with Gary Keller stables driving the No. 4 Chevrolet full time this NASCAR Xfinity Series season.
Cassill, who has driven for team owner Johnny Davis on a number of occasions over the years including full-time campaigns from 2013 to 2015, looks to break back into the spotlight after not competing in many races last season. The Iowa-native veteran sports a solid track record in NXS competition, with one Top 5 and fourteen Top 10 finishes throughout his career. Landon has also made over 300 starts in the NASCAR Cup Series, and brings a wealth of knowledge to the Gaffney-based race team.
Added 2:56 pm (EST)
Added 2:56 pm (EST)

Ma. Tifft - D
Tifft, whose NASCAR driving career was sidelined after an Oct. 2019 seizure at Martinsville Speedway, needs a ride to work because he’s not allowed to drive.
The co-owner of Live Fast Motorsports must go six months without a seizure before he can seek to drive again in North Carolina. It’s only been about 10 weeks since his last seizure — the seventh he’s had since that morning in Martinsville. Doctors diagnosed the 24-year-old with epilepsy last January, but it has taken Tifft since then to overcome his anxiety about the brain disorder and talk publicly about the diagnosis. His driving career on hold because of epilepsy, Matt Tifft became co-owner of the Live Fast Motorsports Cup team with B.J. McLeod. The team will makes its debut in the Feb. 14 Daytona 500.
Added 2:53 pm (EST)
Added 2:53 pm (EST)

Sp. Boyd - D
NASCAR Camping World Truck Series driver, Spencer Boyd, announced that the exploding laundry detergent brand, EcoTwist Clean, will be a season-long sponsor of the No. 20 Young’s Motorsports Chevrolet Silverado.
EcoTwist has revolutionized the laundry detergent industry by making a product that actually cleans your clothes with their Odor Release Technology™ while remaining eco-friendly. As a result of how EcoTwist Clean runs their business, a portion of the proceeds from each sale related to Spencer and racing, will go to benefit the non-profit organization, Trinity Oaks, who uses outdoor activities to give back and make a difference in the lives of others.-Spencer Boyd Racing
Added Yesterday 10:04 pm (EST)
Added Yesterday 10:04 pm (EST)

AJ. Allmendinger - D
AJ Allmendinger will make his return to the NASCAR Cup Series (NCS) in Kaulig Racing’s No. 16 Camaro at the Daytona Int’l Speedway Road Course.
Allmendinger, who is set to compete in Kaulig Racing’s third, full-time entry in the NASCAR Xfinity Series (NXS) in 2021, last competed in the NCS in 2018 before retiring from full-time competition. Coined as a road-course ringer, he recorded one win at Watkins Glen, three top five and nine top-10 finishes on road courses during his tenure in the NCS. He has also notched four road course wins in the NXS, two of which he earned with Kaulig Racing.
Added Yesterday 9:55 pm (EST)
Added Yesterday 9:55 pm (EST)