Matt Selz pores over all of the stats, speeds, and qualifying spots to find the best DFS NASCAR plays for the Real Heroes 400 at Darlington Raceway. 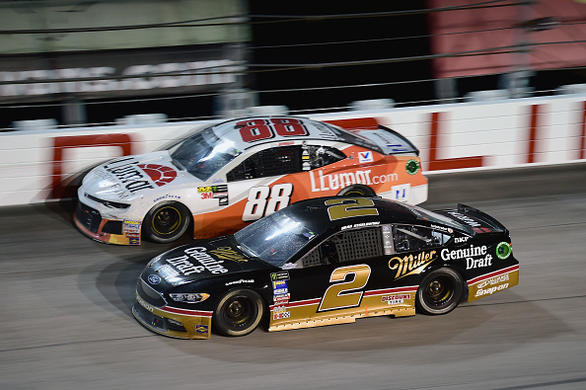 The first Cup race in two months is on tap this weekend at Darlington Raceway, a track we don’t typically see until late-August or early-September but instead we’ll get twice in a week and then again later this year. Darlington is a 1.366-mile track that has 25 degrees of banking in turns 1 and 2 but 23 degrees in turns 3 and 4 as well as having a narrower radius at that end of the track which makes it a challenge to set up the cars correctly for.

This race will be a 400-mile event which equals out to 293 laps around the track nicknamed “Too Tough To Tame” and to make things trickier there hasn’t been any practice or time on the track before the race so we’ve got to rely on who’s been good at this track previously and hope that early-season mojo continues despite the two-month break in the season. We expect drivers to take it easy through the first 30 laps of the race, when there’s a competition caution to make adjustments to the cars, but after that, the aggressiveness should ratchet up as the race draws to a close. There is also a different strategy factor to pay attention to later in the race, that we really can’t predict, but that is the fact that the race order sets the race order to start Wednesday’s race except with an inversion of the top-20 starting spots meaning the driver that wins the race Sunday starts 20th and finishing 20th starts you on the pole. That could make some guys drive a bit harder later in the race to move up or could lead to drivers dropping back to get a better starting spot for the next race.

If you want a thorough breakdown of race stats, rankings, projections, and strategy, also make sure to check out the Track Breakdown, DFS Rankings, Podcast, and the FA Sports Talk stream on our YouTube Channel with me and Jon Impemba.

This tool shows the average points scored by starting spot in the last five races at this track regardless of driver that started in that spot. New this week is the Range column which shows you the difference between the highest and lowest point totals that generated that average to help show consistency.

Al. Labbe - D
DGM Racing announced Monday that Alex Labbe will return to the team for the 2021 NASCAR Xfinity Series season.
Labbe, who competed full-time for the team last season, is seeking to run the full schedule again. In its Monday release, the team stated he is currently set to run half the races and that it will pursue additional funding to put him on track for all 33 races. BRP will support Labbe’s No. 36 Chevrolet for four races through its Can-Am brand. The 27-year-old Quebecois notched five top-10 finishes last season on his way to 14th in the Xfinity standings.
Added Yesterday 3:16 pm (EST)
Added Yesterday 3:16 pm (EST)

Jo. Anderson - D
Jordan Anderson Racing (JAR) announced today that the team will expand operations to race full-time in the 2021 NASCAR Xfinity Series (NXS) competing for Sunoco Rookie of the Year honors with owner/driver Jordan Anderson from Forest Acres, SC in the No. 31 Bommarito Automotive Group Chevrolet Camaro SS.
The team will operate under the Chevrolet banner with Richard Childress Racing acquired cars powered by ECR engines. Artie Haire will serve as crew chief for the organization after joining the team during the summer of 2020. The JAR entry will carry the No. 31 on both sides of the sleek red, white, and black Chevrolet Camaro SS. Bommarito Automotive Group will return for the sixth consecutive year as a primary marketing partner of Anderson. Details of other partners on the JAR No. 31 to be announced at a later date.
Added Yesterday 2:24 pm (EST)
Added Yesterday 2:24 pm (EST)

De. Cope - D
Derrike Cope will pilot the #15 Rick Ware Racing (RWR) Chevrolet in his final Daytona 500 start at Daytona. Jacob Companies, a long time sponsor of RWR, will be the primary sponsor on board the #15.
“I am really looking forward to running this year's Daytona 500 with Rick Ware Racing,” said Derrike Cope, former 1990 Daytona 500 Champion and StarCom Racing Team Manager. “I have known Rick and his family for a long time and I am excited to have the opportunity to go to Daytona and race for another win!” Cope has two career NASCAR cup wins, the 1990 Daytona 500 and the 1990 Dover spring race, one XFINITY victory at New Hampshire in 1994, as well as a dozen Winston West victories (now known as the NASCAR K&N Series). With 722 career starts in NASCAR’s top three series, Cope is eager to get back on the track for one last lick at the Daytona 500.-RWR
Added Jan 24 2:57 pm (EST)
Added Jan 24 2:57 pm (EST)