Matt Selz gives you a break down of the top prospects and which ones to watch for the San Diego Padres Farm System in the latest MLB Farm Report. 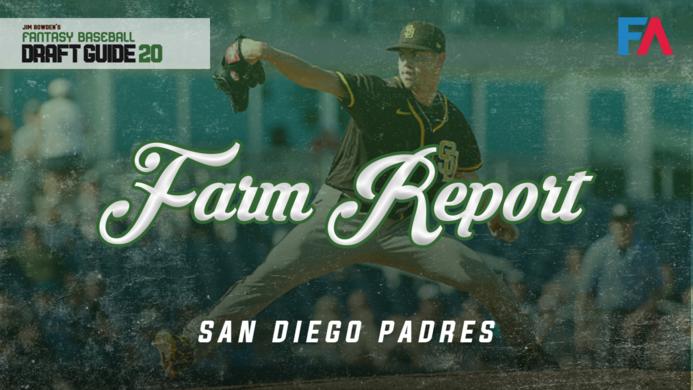 A.J. Preller made a splash a few offseasons ago when he went wild in free agency and made a ton of high-priced acquisitions and pulled off some big trades to fill out the roster. That didn’t work out too well for the major league results but it did get them started on this road of building up the farm system quite rapidly. They are routinely considered one of the top systems in the league but with the graduation of a few of the pitchers and bats, the depth has taken a bit of a hit and that’s why they aren’t quite as highly ranked as some may expect. The high-end talent is still present as well but the depth just isn’t there.

This is almost an unfair one to start with for their system as at this point it should be known the...

G. Gallegos - RP
STL
Updating a previous item, it has not been confirmed that Giovanny Gallegos tested positive for COVID-19.
Ben Frederickson of the St. Louis Post-Dispatch had written in a column Sunday that Gallegos was one of four positive diagnoses in the Cardinals' player pool, but the column has since been updated with that part taken out. All that is known for sure is that Gallegos remains in his native Mexico as summer camp workouts get underway at Busch Stadium, though it's easy to connect the dots as to why he wouldn't be allowed to travel at the moment. The closer situation in St. Louis is among the cloudiest in MLB, at least right now. Jordan Hicks is expected to return from Tommy John surgery a few weeks into the 60-game campaign.
Added 7:16 pm (EST)
Added 7:16 pm (EST)

P. Sandoval - 3B
SF
Giants manager Gabe Kapler said Sunday that Pablo Sandoval has "demonstrated he's healthy."
Sandoval showed up to summer camp in San Francisco packing a good amount of additional weight, to put it somewhat sensitively, but Kapler noted that he is not designed to be a leadoff man and looks like "a good DH candidate." Sandoval won't have much time before the season to improve his physical condition.
Added 7:11 pm (EST)
Added 7:11 pm (EST)

G. Gallegos - RP
STL
According to Ben Frederickson of the St. Louis Post-Dispatch, Giovanny Gallegos has tested positive for COVID-19.
Cardinals president John Mozeliak said Friday that Gallegos was still in his native Mexico, and he'll presumably have to continue quarantining there until he returns two straight negative COVID-19 test results in line with MLB's intake testing protocol. The 28-year-old seemed like a good candidate for saves this season in St. Louis with Jordan Hicks still working his way back from Tommy John surgery. Carlos Martinez and Alex Reyes, a couple of other options at closer, are also absent from summer camp workouts in St. Louis.
Added 6:53 pm (EST)
Added 6:53 pm (EST)

J. Lowrie - 3B
NYM
Jed Lowrie declined to reveal the exact nature of his leg injury during a Zoom call with reporters on Sunday.
Lowrie said he didn't want "create any distractions" by revealing the diagnosis. It's been clear for a while that he's been hobbled by more than just the knee issue that required a surgical repair last year. He's trying out different leg braces that will hopefully allow him to contribute in some capacity this season. Lowrie, 36, has appeared in just nine games for the Mets since being inked to a two-year, $20 million deal in January 2019.
Added 6:37 pm (EST)
Added 6:37 pm (EST)

M. Tanaka - SP
NYY
Masahiro Tanaka was diagnosed with a mild concussion, per Yankees manager Aaron Boone.
Tanaka took a Giancarlo Stanton line drive to the head on Saturday afternoon, but he returned to Yankee Stadium on Sunday and was reportedly in good spirits. Boone said he's hopeful the veteran right-hander will be ready for the start of the 2020 season, but concussions are usually unpredictable things. Tanaka will probably have to return to the mound by the end of next week to be properly stretched out come late July.
Added 6:28 pm (EST)
Added 6:28 pm (EST)

K. Jansen - RP
LA
Dodgers manager Dave Roberts announced Sunday that Kenley Jansen has not reported to summer camp.
Roberts declined to offer an explanation for Jansen's absence, which has become the typical playbook on players who have yet to fully pass through MLB's COVID-19 testing protocols. It could be that the results aren't in yet. Jansen is currently going as the No. 5 reliever off the board in the average Yahoo draft after registering a 3.71 ERA, 1.06 WHIP, and 80/16 K/BB ratio over 63 innings last year while earning 33 saves. Pedro Baez is probably the secondary ninth-inning option for the Dodgers leading into the planned 60-game campaign.
Added 6:18 pm (EST)
Added 6:18 pm (EST)

C. Rodón - SP
CWS
Carlos Rodon (elbow) threw a three-inning simulated game on Sunday.
Rodon had an uncertain timetable this spring after undergoing Tommy John surgery last May, but the COVID-19 shutdown has allowed him time to work to full strength. The 27-year-old left-hander is presumably in the running for a rotation spot at summer camp with the White Sox, though he could be worked back in as a long reliever. Many teams could carry more than five starters and a number of mop-up types.
Added 6:11 pm (EST)
Added 6:11 pm (EST)

S. Bieber - SP
CLE1
Indians pitching coach Carl Willis raved about Shane Bieber's first summer camp workout on Saturday.
“They (the hitters) can attest to it,” Willis said Sunday on a Zoom call with reporters. “He was really, really good yesterday. From a stuff standpoint, velocity-wise, pitch profiles and execution I don’t think anyone could have been more pleased with what we saw.” Bieber should be treated as top-10 starter in fantasy drafts this summer after registering a 3.28 ERA, 1.05 WHIP, and 259/40 K/BB ratio over 214 1/3 innings last year at age 24.
Added 5:02 pm (EST)
Added 5:02 pm (EST)