Matthew Selz discusses the prospects who were recently called up and those nearing call ups and what kind of impact they could have on the big club. 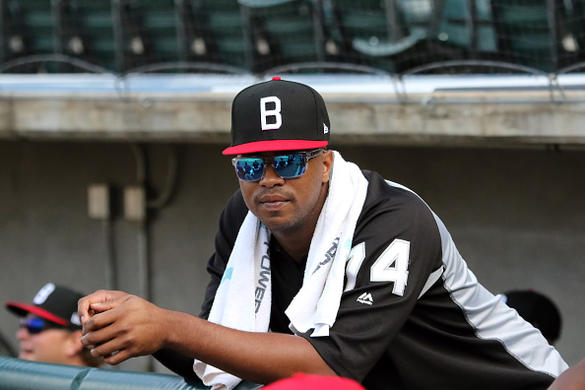 It’s that time of year again when we’re nearing expanding rosters on major league level and that means an influx of prospects getting their first taste of the bigs for teams that are in and out of playoff contention a like. This week we’ll highlight some potential call-ups that maybe still available in your leagues.

Eloy Jimenez (OF CWS) - Jimenez might be the most well-known name on this list as he’s been a top prospect in baseball since signing with the Cubs in 2013 and has really taken off this year. In 99 games between Double-A Birmingham and Triple-A Charlotte he has put up a very impressive .337/.384/.582 slash line with 21 home runs, 71 RBI, and 59 runs. The White Sox have been out of playoff contention since before the season started but now with expanding rosters coming it’s time to see what he can do on the south side of Chicago, plus they already called up their top-pitching prospect in Michael Kopech earlier this week so Jimenez shouldn’t be far off with nothing left to prove at Triple-A.

Frank Schwindel (OF KC) - The Royals have several names that might be coming up in September both on the hitting and pitching side like Josh Staumont, Richard Lovelady, and Kelvin Gutierrez who is likely to take over the third base role from Hunter Dozier after coming over from the Nationals for Kelvin Herrera , but Schwindel has the most impressive numbers of that group. Schwindel is 26 years old at this point but the last two years at Triple-A has shown he should get a shot on an MLB roster. The right fielder has produced a combined slash line of .303/.339/.517 in the last 220 games at Triple-A with 39 homers, 157 RBI, 111 runs, and two steals. Kansas City has struggled with their outfield play much of this year and Schwindel should see time at Kauffman soon.

Stephen Gonsalves (SP MIN) - Gonsalves actually has been called up already and made a start on the 20th of August for Minnesota, which didn’t go terribly well. Before the call to the Twins he was very good across two levels of the minors this year with a 12-3 record, 2.76 ERA, 1.17 WHIP, .184 BAA, 120:65 K:BB ratio in 120.2 total innings. The 6’5” southpaw uses a riding low-90s fastball, a good sinking changeup with arm speed deception, and a major league average curveball. Those three pitches make a mid-rotation starter the ceiling for Gonsalves after he gets over the nerves that derailed his first pro start that is.

Jimmie Sherfy (RHP ARI) - Another 26-year-old who has had a bumpy ride to the highest levels of the D-Backs system is on the verge of making it back to the majors. He has made a few appearances in the majors over the last two seasons but has spent most of his time at Triple-A Reno with 89.1 innings thrown there. In that span he has a 2.31 ERA, 1.05 WHIP, and 11.38 K/9 and 34 saves and 6-2 record. That being said he does have a tendency to walk more people than you’d like to see from a guy in his role especially with his devastating fastball-slider combo. Arizona is clinging to a small 1.0 game lead and could use another dynamic arm in the pen who can also help in the ninth too.

Austin Hays (OF BAL) - Hays was expected to take a big role in Baltimore this year after hitting at every level of the minors prior to this year, however injuries derailed his 2018 campaign pretty badly. He was in the middle of the top-100 lists at the start of this season but has now fallen all the way outside of those rankings. When healthy though his bat plays at a high level and the power speed combo is evident even in his abridged 65 game season this year with eight homers and six steals. Baltimore has Adam Jones leaving at the end of the year and Mark Trumbo is injured at the moment meaning now is as good of time as any to see Hays playing full time in Baltimore.

Willi Castro (SS DET) - Castro came over from Cleveland in the Leonys Martín deal at the deadline and since then he has shown well at Double-A Erie. In 117 games total this year he’s hitting .263/.315/.393 with eight homers, 65 runs, 50 RBI, and 15 steals though in 20 games at Erie he has a .341/.372/.585 slash line. That might not seem like as dominant a line as he should have to be a burgeoning call-up but he is the highest ranked short stop in the Tigers system and José Iglesias is set to be a free agent at the end of the season. Detroit needs to find out what they’re young guys can do.

Victor Robles (OF WAS) - Robles was expected to be up much sooner this year than he will be but injuries have really cost him much of his 2018 season. Had he been healthy, Juan Soto might be the one being talked about here instead of the other way around. In 41 games total this year (29 at Triple-A) he is hitting .259/.362/.320 with one homer, 24 runs, 11 RBI, and 16 steals. He is still a top-five prospect in baseball and the top Nationals prospect and with the team clearly giving up on the rest of the year having traded Daniel Murphy and Matt Adams and nearly shipping Bryce Harper out of town twice, Robles should see his name among those called up the moment rosters expand to see what a future Nationals outfield might look like with he and Soto making up two of the pieces.

MLB Kirby Yates (family) not yet at Padres summer camp

D. Peters - SP
LAA
Dillon Peters (ankle, oblique) isn't expected to be ready before mid-July.
Peters suffered oblique and ankle injuries back in March, before spring training was suspended amid the COVID-19 pandemic. The ankle is apparently healed, but the oblique is not. Peters, 27, posted a 5.38 ERA and 55/26 K/BB ratio over 72 innings (12 starts, five relief appearances) last year for the Angels.
Added 6:24 pm (EST)
Added 6:24 pm (EST)

K. Yates - RP
SD
Kirby Yates is not currently at summer camp due to a COVID-19-related family issue, per Padres general manager A.J. Preller.
Yates himself has not tested positive for COVID-19 -- at least not yet -- and the expectation is that he will arrive at San Diego's Petco Park later this weekend to begin the intake and screening process. The 33-year-old right-hander projects as a top-tier fantasy closer for 2020 after registering a dominant 1.19 ERA, 0.89 WHIP, and 101/13 K/BB ratio over 60 2/3 innings last season while racking up 41 saves. Drew Pomeranz also holds considerable value as a multi-inning setup man and possible secondary option for save chances.
Added 6:08 pm (EST)
Added 6:08 pm (EST)

W. Astudillo - C
MIN
Twins president Derek Falvey revealed Friday that Willians Astudillo has tested positive for COVID-19.
Twins minor leaguers Edward Colina and Nick Gordon have also tested positive, but those positive tests came away from the intake process for summer camp. Astudillo is asymptotic but has been placed in quarantine and will have to return two negative tests before he can join the workouts happening at Target Field. There is another positive on the Twins' major league roster, but Falvey declined to reveal the name.
Added 5:12 pm (EST)
Added 5:12 pm (EST)

L. McCullers Jr. - SP
HOU
Lance McCullers (elbow) is scheduled to throw live batting practice on Saturday.
McCullers missed all of 2019 after undergoing Tommy John reconstructive elbow surgery, but he should be fully recovered by now. “I’m in a very good place, mentally and physically,” McCullers said after arriving at summer camp in Houston on Friday. “I feel excellent. I felt great in spring training, but the extra time off and being able to ramp it up and pull it back down, I feel it’s made me a little bit stronger. I’m excited.” The 26-year-old posted a strong 3.67 ERA and 10.1 K/9 through his first 453 2/3 major league innings between 2015-2018.
Added 5:05 pm (EST)
Added 5:05 pm (EST)

J. Duplantier - SP
ARI
Diamondbacks GM Mike Hazen said Friday that Jon Duplantier (elbow) is behind the other pitchers at summer camp.
Duplantier had to be shut down in April due to some soreness in his right elbow. It doesn't seem to be overly serious, but the 25-year-old may not be an option for Arizona when the season gets underway. Duplantier posted a 4.42 ERA and 34/18 K/BB ratio over his first 36 2/3 major league innings in 2019.
Added 5:03 pm (EST)
Added 5:03 pm (EST)

C. Kershaw - SP
LA
Dodgers manager Dave Roberts said Friday that Clayton Kershaw, Ross Stripling, and Alex Wood have already thrown three-inning simulated games.
Given where we are on the calendar, with Opening Day tentatively scheduled for July 23-24, those three pitchers should be close to fully stretched out when real games get underway. Kershaw and Wood look to be locked into spots in the Dodgers' starting rotation, with Stripling projected to serve as a valuable swingman.
Added 4:21 pm (EST)
Added 4:21 pm (EST)

E. Phillips - RP
BAL
Evan Phillips (elbow) has been added to the Orioles' player pool.
Phillips went down with an elbow issue back in early March, but it proved to be minor and the delayed start to the 2020 season will apparently allow him to be an option for the O's leading into MLB's revised 60-game campaign. The 25-year-old struggled to a 6.43 ERA and 1.86 WHIP in 28 innings last season.
Added 3:55 pm (EST)
Added 3:55 pm (EST)