Matt Selz takes a look at the DFS paylines across the industry gives his analysis on the results. 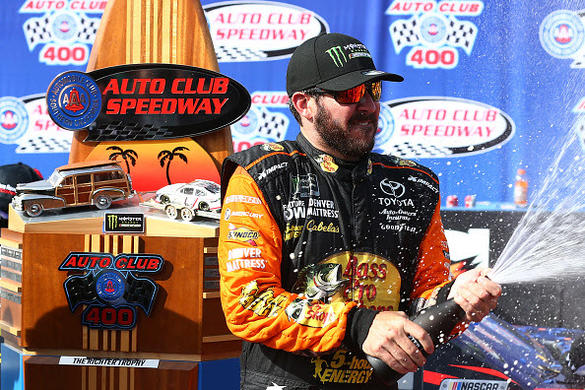 So the streak ended for Kevin Harvick after he essentially crashed himself out of the race when he tried to come down on Kyle Larson early in the race. That doesn’t mean there wasn’t a dominant performance however. Martin Truex Jr. locked down his first win of the season with a performance that included leading 125 of the 200 laps. Unfortunately, the winning streak for the lineups also came to an end but let’s analyze them and see what could’ve been done better. 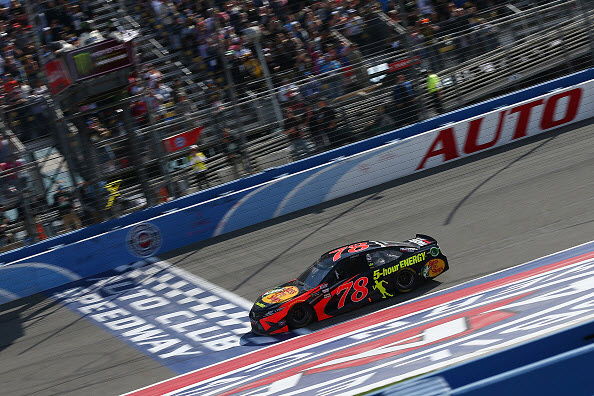 This nice sized GPP contest used all 37 drivers with the lowest-owned being Timmy Hill who was on 0.53% of lineups (or 52 out of 9,908). The highest-owned driver is not a shock being Kevin Harvick with his domination of late and showing a fast car in practice in the long run. His -10.5 points were on 45.07% of rosters in this contest. Kyle Busch (43.06%) and Clint Bowyer (41.77%) round out the drivers who broke the 40-percent barrier, both of whom put up 48 or more points this week, with Busch leading 62 laps in total. Three other drivers were in the 30s with Daniel Suarez leading the way at nearly 38 percent and then Hendrick teammates Jimmie Johnson and Chase Elliott at practically the same ownership, 31.83 and 31.81 respectively. The driver with best pop for their ownership was Brad Keselowski with a 50.5-point race on 10.88% of rosters. Meanwhile my favorite cheap play for the week, Cole Whitt, put up 25 points for 10.37% of rosters. However the highest-scoring driver for the week, Martin Truex Jr. (111.75), was on just 21.66% rosters, and not surprisingly, they were all at the top of the scoring lineups.

The 5,900 some-odd entrants in this one makes it just over half the size of the previously discussed one, however the percentages are remarkably similar to the other contest. The first difference however is that Kyle Busch was the highest-owned driver at 44.57% with Kevin Harvick just behind at 43.94%. Like the other one, Clint Bowyer is the only other driver over 40 percent owned at 42.71. Once again the same three drivers are the only ones to be between 30-40 percent with Daniel Suarez at nearly 37% and the teammates, Jimmie Johnson and Chase Elliott at 31 and 30.95 percent. Martin Truex Jr. was actually on fewer lineups this time around at just over 20% and Kasey Kahne, Kyle Larson, A.J. Allmendinger, and Denny Hamlin all being higher-owned in the 20s than him. The ownership for Cole Whitt fell by over 2% as he was on 8.29% of rosters and Brad Keselowski fell slightly too at 10%. If you wanted a high point total, starting with Truex was almost a must with just 14 of the top-300 starting with someone other than the points leader.

Being that it is March Madness, there are bound to be some surprises this time of year. One of them is that Daniel Suarez was the highest-owned driver in this contest at 50.16%, the only driver to crack the 50% barrier in any of these contests. After that there was little separation between the four drivers, Kevin Harvick, Jimmie Johnson, Kyle Busch, and Clint Bowyer. Each of those drivers slotted between 48.6 and 46.18 percent owned in this bigger double-up field. It was not a surprise to see Martin Truex Jr. fall in the ownership rate given that he was the pole sitter in a cash game, but he did see a steep drop down to 14.17% in this one. Another surprise in this contest was to see Kasey Kahne up to 33% owned compared to the low 20s where he was in the GPP fields. More than half the 37-car field (20 drivers) were owned in the single digits with Brad Keselowski in the middle of that group at 6.22 percent. All 37 drivers were played in the cash game, but in the smaller ones not every driver was used on at least one roster simply because of fewer combinations being utilized. For example, in a 23-entrant $5 double-up, 24 drivers were used and five had ownerships higher than 52%, including three at nearly 70%.

Here is what the best possible scoring lineup looks like this week:

This is the first week of five races so far this season that at least one person put together the perfect lineup. Both winners in the GPPs I wrote about hit this lineup perfectly. William Byron is the only real surprise on this list as I had written about five of the six in my playbook for this race. He did have a fast car and capitalized on position differential to really rack up the 43.25-point day. Overall there were five 50+-point scorers this race, mostly because so many fast cars started in the back, and three of them are on this roster, with Brad Keselowski and Denny Hamlin being left off because at their price points, there were better options (i.e. Truex and Busch for Keselowski and Johnson for Hamlin). 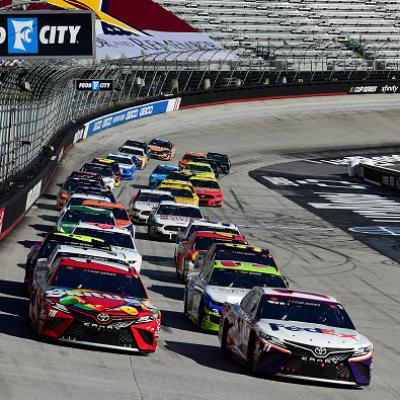 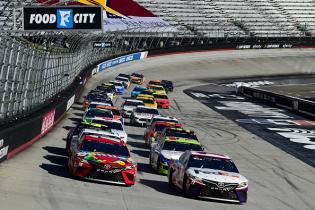 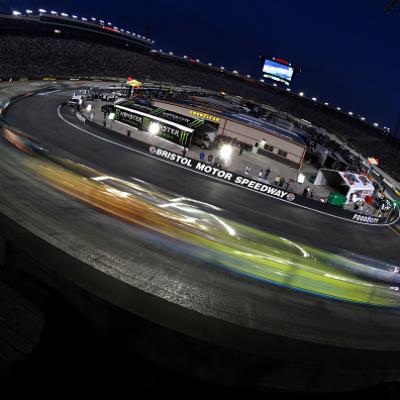 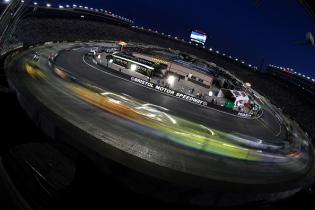 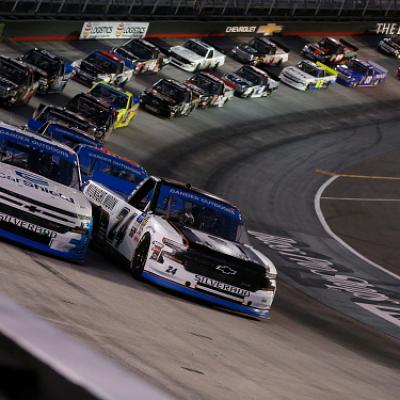 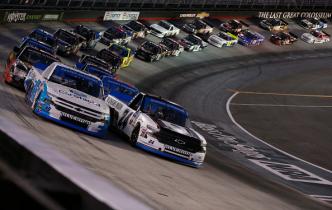 NASCAR Yeley replaces Brennan Poole in the #15 at Bristol

Ch. Buescher - D
Chris Buescher will make his 11th Cup start at Bristol on Saturday, where he has a best result of fifth, which came in the 2016 fall race.
He most recently finished 23rd at the half-mile track in May, and last season ran 17th in the fall event. Buescher has an average starting position of 23.6 with a career-best 12th-place start in 2016. In five Xfinity starts at Bristol, Buescher has three top-10 runs, including a career-best third in 2015.-Roush Fenway Racing
Added Yesterday 3:42 pm (EST)
Added Yesterday 3:42 pm (EST)

Gr. Gaulding - D
Gray Gaulding will be a busy man this weekend at Bristol Motor Speedway as he'll be running the NASCAR Xfinity Series Food City 300 on Friday and the NASCAR Cup Series Bass Pro Shops NRA Night Race on Saturday.
The 22-year old will drive the No. 07 SS Green Light Racing machine with sponsorship from Walk-On's Sports Bistreaux in the NXS event and he will have primary sponsorship from Panini America on the No. 27 Rick Ware Racing machine in Saturday's Cup Series race.-TobyChristie.com
Added Yesterday 3:34 pm (EST)
Added Yesterday 3:34 pm (EST)

JJ. Yeley - D
J.J. Yeley will drive the #15 Thriv3 Chevrolet for Rick Ware Racing Saturday night at Bristol Motor Speedway.
Poole has driven the #15 in all the races so far this season. However, he did not have sponsorship for Bristol. Yeley will have Thriv5 on the #15. Gray Gaulding will be behind the wheel of the #27 with Panini America sponsorship. Yeley typically is in the #27.-jayski.com
Added Yesterday 2:38 pm (EST)
Added Yesterday 2:38 pm (EST)

Al. Bowman - D
Coming off a ninth-place finish at Richmond Raceway, Alex Bowman now sits eighth in the NASCAR Cup Series playoff standings going into Saturday night’s race at Bristol Motor Speedway. The Tucson, Arizona, native is 27 markers above the 12th-place cut line.
Bowman has nine NASCAR Cup Series starts at BMS with two top-10 results. His best performance at BMS came in 2018 when he brought home a fifth-place finish after 500 laps in the spring race. Earlier this season, the series visited the track for the 2020 NASCAR All-Star Race, where Bowman and the team earned an eighth-place finish after rolling off second. In 2013, he made two starts at the facility in the NASCAR Xfinity Series, capturing one top-15 finish.-Hendrick Motorsports
Added Yesterday 2:23 pm (EST)
Added Yesterday 2:23 pm (EST)

Ji. Johnson - D
Dating back to 2014, Jimmie Johnson has only finished outside of the top 10 at Bristol three times over the span of 12 races, making for nine top-10 results. Even better, six of those finishes were in the top five, including one win in the spring of 2017.
Johnson finished third in his most recent points race at Bristol in May. The only other track where Johnson has more top-10 finishes during that time frame is Dover, where he has 10. Johnson has the best overall average finish (8.85) of any driver with more than six starts at Bristol Motor Speedway.-Hendrick Motorsports
Added Yesterday 2:22 pm (EST)
Added Yesterday 2:22 pm (EST)

Wi. Byron - D
Heading to the final race in the Round of 16, William Byron currently sits three points below the cut line and looks to advance in the NASCAR Cup Series playoffs. While he may start the race on the outside looking in, the gap between 10th place and 13th in the playoff standings is tight.
Currently sitting 13th, Byron has outscored 12th-place driver Clint Bowyer by more than three points in three of the last four races. Meanwhile, the third-year Cup Series driver is only seven points behind 10th-place Aric Almirola. In the last four races at Bristol Motor Speedway, Almirola has finished at least seven positions behind the driver of the No. 24. Byron is also only seven points behind Kurt Busch, who is 11th in the standings. Over the last six races this season, Byron has averaged 10.6 more points per race than Busch.-Hendrick Motorsports
Added Yesterday 2:21 pm (EST)
Added Yesterday 2:21 pm (EST)

Ch. Elliott - D
Chase Elliott (#9 NAPA AUTO PARTS Chevrolet Camaro) currently sits seventh in the playoff standings, 57 points behind the leader.
During the May NASCAR Cup Series event at Bristol, Elliott and the NAPA team were a force to be reckoned with all afternoon, leading 88 laps and picking up two stage wins before a late-race accident while battling for the lead left him with a 22nd-place finish. In July at BMS, Elliott took the checkered flag after dominating the field during the 2020 NASCAR All-Star Race. Elliott won the second and third stages before crossing the finish line first in the final stage and earning the $1 million prize. In nine Cup-level starts at Bristol, Elliott has led 287 laps – his second-highest total at any track behind only Dover (321). He leads all drivers with the longest active streak of races led at Bristol (four).-Hendrick Motorsports
Added Yesterday 2:20 pm (EST)
Added Yesterday 2:20 pm (EST)

To. Gilliland - D
For the first time in his Truck Series career, Todd Gilliland is one of the 10 drivers qualified to compete for the championship. He is seeded ninth, 23 points behind first place and one point above 10th.
Making the playoffs is also special since Front Row Motorsports (FRM) is new to the Truck Series and made the Round of 10 in its first attempt with Gilliland in the No. 38 Ford F-150. In 16 starts this season, Gilliland has four top-five, nine top-10 finishes and has led 92 laps in the No. 38 Ford F-150 for FRM. This Thursday, Speedco will be back as the primary sponsor for Gilliland.-FRM
Added Sep 16 8:35 pm (EST)
Added Sep 16 8:35 pm (EST)