Justin Vreeland breaks down his draft strategy on why you need to be drafting running backs early. 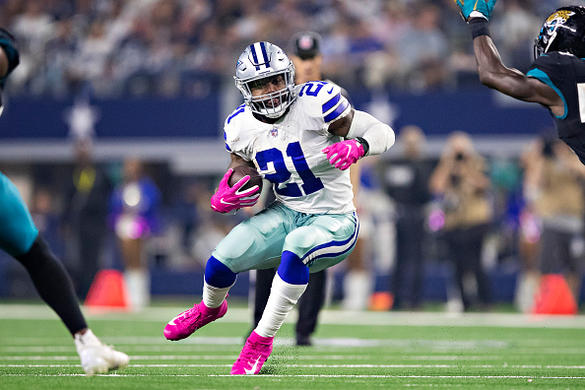 Welcome to the twelfth edition of the RB previews! I recently hosted a Fantasy Alarm Best Ball league and I didn’t love how my running back core turned out. I nearly always go heavy on running backs early in drafts and after not doing so in this draft; I want to stress the importance of doing so in this piece! Without further ado, let’s dive in!

Some people may argue this with their love of the Zero-RB strategy, but personally that’s not for me. Can it work? Sure; however, it is riskier and you have to hit on the running backs that you take. For the most part, the running backs that are good during the season are the running backs that we thought would be good prior to the season starting. They get the touches necessary to score fantasy points on a consistent basis. You aren’t finding backs late in the draft that will be getting 20+ touches anytime soon (unless an injury occurs). For that reason, grabbing running backs early is pivotal! In that recent Fantasy Alarm draft, I had just one back through three rounds and by the end of the draft I felt pretty thin at the position. Lesson learned! Let’s take a look at a few examples that I remember from the 2019 season...

Last year’s winner of the Razz Bowl (an overall winner best ball format that consisted of 15 leagues filled with 140 fantasy analysts and 40 fans), somehow managed to land Christian McCaffrey , Dalvin Cook , and Derrick Henry . That running back core carried him to the title. As for me, I landed a top-20 overall finish in the Razz Bowl with a running back core of Le’Veon Bell, Derrick Henry , David Montgomery and Kenyan Drake – all of which I selected within the first six rounds. Change that first pick from Bell to Cook and who knows; maybe I have a crack at the title. High-end running backs bring you consistency and stability on a weekly basis, which is crucial to success, especially in best ball leagues.

Speaking of best ball leagues, for my highest scoring BB10 team from last season I used my first three picks on Christian McCaffrey , Leonard Fournette , and Aaron Jones . Of course it doesn’t hurt that all three of those backs performed well and that Jones crushed pick value, but the stability they brought was very important. I didn’t have to rely on guys like Chris Thompson , Justin Jackson , and Peyton Barber to have big weeks. I grabbed receivers like Hunter Renfrow and Deebo Samuel late in drafts in many of best ball leagues and they had plenty of weeks where they cracked my starting lineup. You can go way deeper in the draft and get wide receivers who can be big hits certain weeks in a best ball format, but you are unlikely to find backs deep in the draft that will ever really help you (barring injuries). So, while I believe going RB early in all drafts is important, I think it becomes even more crucial in best ball formats. It is something to keep in mind on a yearly basis.

Be sure to follow me on Twitter @JustinVreeland as I will post plenty of my drafts using RB heavy approaches and you can get an idea of some of the different routes you can go while using this strategy. You can also join some of the Fantasy Alarm Best Ball drafts that I am hosting, if you think you can take myself and others down!

NFL Glazer: Drew Brees will retire at end of season

A. Brown - WR
TB1
Antonio Brown caught 1-of-3 targets for 10 yards in the Bucs' Divisional Round win over the Saints.
Brown wasn't targeted in the second half as he stood on the sideline with what appeared to be an injury. It was Scotty Miller and Tyler Johnson soaking up snaps behind Mike Evans and Chris Godwin. Brown will have the week to get ready for next Sunday's NFC title game against the Packers.
Added Yesterday 10:49 pm (EST)
Added Yesterday 10:49 pm (EST)

T. Smith - WR
NO1
Tre'Quan Smith caught all three of his targets for 85 yards and two touchdowns in the Saints' Divisional Round loss to the Bucs.
He caught a 56-yard score on a flea-flicker trick play from Jameis Winston before then making an incredible adjustment for a second score at the front right pylon on Drew Brees' lone touchdown pass of the game. Smith led the Saints in receiving. During the regular season, Smith posted a 34-448-4 line on 50 targets, setting new highs in targets, catches, and yards as the Saints' third wideout. A big-play receiver, maybe Smith will get more of a chance in 2021 if Emmanuel Sanders leaves town and the Saints also become more aggressive down the field. Smith will be entering the final year of his rookie deal.
Added Yesterday 10:46 pm (EST)
Added Yesterday 10:46 pm (EST)

R. Gronkowski - TE
TB1
Rob Gronkowski caught 1-of-5 targets for 14 yards in the Bucs' Divisional Round win over the Saints.
His missed connections were tough throws and would have required diving, sprawling grabs. Gronkowski is a favorite of Tom Brady in the red zone alongside Mike Evans, but his counting stats haven't been there much this season in a loaded offense. Gronkowski will be a TD-dependent proposition next weekend at Green Bay in the NFC title game.
Added Yesterday 10:44 pm (EST)
Added Yesterday 10:44 pm (EST)

C. Godwin - WR
TB1
Chris Godwin caught 4-of-7 targets for 34 yards in the Bucs' Divisional Round win over the Saints.
Godwin's biggest play was a third-down catch on a slant on the final drive that produced a first down and helped salt away the clock. He very nearly made an incredible touchdown catch in the back of the end zone earlier in the evening but was unable to control the ball as he went to the ground despite beating the safety on the deep shot and getting two feet in bounds on the play. Godwin has been up-and-down this season in a loaded offense. He gets the Packers next week in the NFC title bout.
Added Yesterday 10:41 pm (EST)
Added Yesterday 10:41 pm (EST)

J. Cook - TE
NO1
Jared Cook caught 5-of-6 targets for 28 yards in the Saints' Divisional Round loss to the Bucs.
Cook had one to forget, losing a fumble in the open field that led to a Bucs touchdown the other way several plays later, and then he had a Drew Brees pass go through his hands and into the arms of a defensive back for an interception to seal the eventual loss in the fourth quarter. On the year, Cook, 34 in April, caught 37-of-60 targets for 504 yards and seven touchdowns across 15 games. Cook finished the year as the overall TE19 in half-PPR points per game. His best days are well behind him, even if Cook still offers some athleticism. Cook will head to free agency in March.
Added Yesterday 10:36 pm (EST)
Added Yesterday 10:36 pm (EST)

R. Jones - RB
TB1
Ronald Jones rushed 13 times for 62 yards in the Bucs' Divisional Round win over the Saints.
He failed to catch his lone target in the passing game and was out-touched 22-13 by Leonard Fournette, who piled up 107 yards and one touchdown. Jones played through a quad issue that was noticeably bothering him on a long run that was eventually called back on a penalty. He'll get another week to rest his leg ahead of the NFC title date with the Packers at Lambeau. The cold weather won't be friendly to Jones' quad. Look for Fournette to again pace the Bucs backfield in that one.
Added Yesterday 10:34 pm (EST)
Added Yesterday 10:34 pm (EST)

A. Kamara - RB
NO1
Alvin Kamara rushed 18 times for 85 yards and caught 3-of-6 targets for 20 yards in the Saints' Divisional Round loss to the Bucs.
It was Kamara's ninth 100-yard game of the season after he accomplished the feat seven times during the regular season. Kamara looked well on his way to a mammoth receiving year, but his receiving numbers flat-lined for a stretch when Taysom Hill was the quarterback for a month when Drew Brees was out with broken ribs. Kamara's season ended with 187 rushing attempts for a career-high 932 yards and 16 scores on the ground. He also set career-highs with 107 targets for 83 grabs, 756 yards, and five scores through the air. Kamara was rewarded with a long0-term extension in 2020 and will be the focal point of the Brees-less Saints offense in the coming years. Kamara will be a top-three fantasy pick next summer.
Added Yesterday 10:27 pm (EST)
Added Yesterday 10:27 pm (EST)