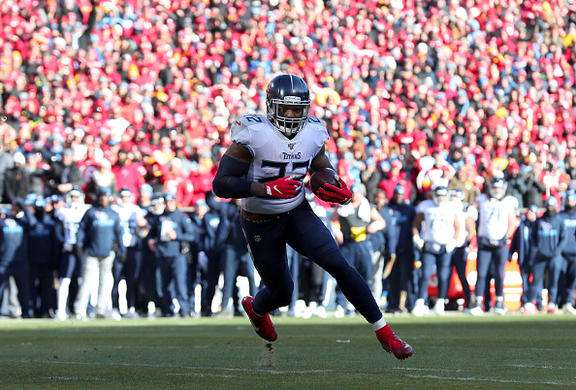 What’s up FANation?! We kicked off the Fantasy Alarm Best Ball series on Real Time Fantasy Sports last night and it was pretty interesting to say the least! I will breakdown what caught my eye and how I feel about a few teams. The draft board can be found below. 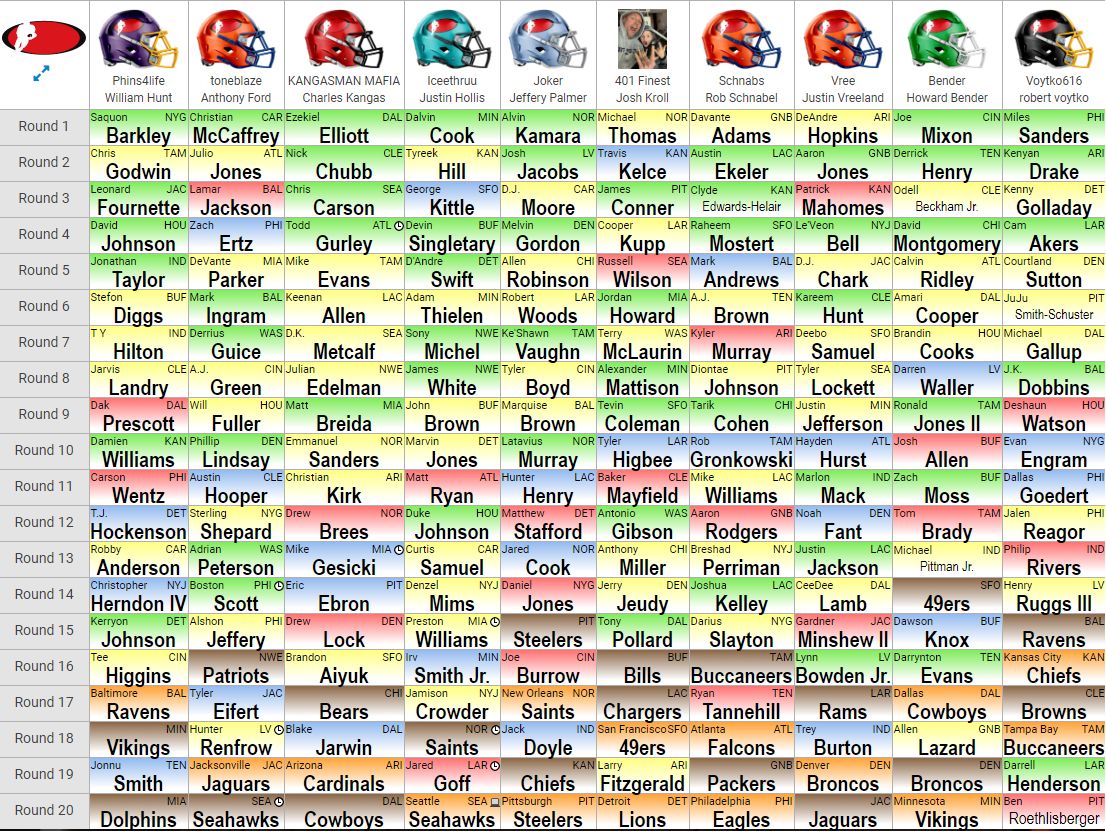 The first thing I want to start with is that I am not thrilled about my team. It started right away, as my first pick is probably my least favorite of the whole draft. I considered Derrick Henry and Kenyan Drake as well, but I didn’t really like any of the available options at eighth overall. If I could re-do that pick, I would, and I would take Henry. I would feel way better about my running back group with him, while still feeling comfortable with my wide receivers.

Speaking of Henry, a few people on Twitter said they were shocked to see Henry went in the second round. A fair reaction, but it is a full PPR, 10-team league, so while falling to 12th overall was a bit of a surprise, it wasn’t the craziest thing I have seen. Still a nice value there for Mr. Bender though!

Another thing that Twitter made clear, they loved KANGASMAN’s roster! Some responses included “KANGASMAN you get a thumbs up” and “KANGASMAN CRUSHED that draft” and lastly “Great draft Kangas! Best team IMO.” And you know what, I can’t argue with any of that. I am a big believer in stacking up on running backs early (which is a big reason why I hate this particular draft for me), and he still came away with a really strong receiving corps. He was the last person to draft a quarterback, but he got steady ole’ Drew Brees and Drew Lock brings some nice upside. I don’t really care for his tight ends, but overall, his team is strong and will be tough to beat!

One thing that can help you have the best team is landing some of the best value picks of the draft and Kangas did just that with his selections of Todd Gurley and Mike Evans in back-to-back rounds. I am not sure how we let that happen. However, my favorite pick of the draft is probably Joker’s fifth round selection of Allen Robinson . I was really hoping he would somehow fall to me and I was shocked to see him still there halfway through the fifth.

If we are going to have favorite picks, there’s also going to be least favorite picks. Jordan Howard in the sixth round of a PPR league is probably my least favorite pick of the draft (and I say that as someone who likes Howard this year). I just can’t see him producing enough to be worth that pick. This draft did see running backs going consistently above their ADP though and I am sure that factored into Josh’s selection of Howard (as well as only having one back rostered through five rounds). I hate to keep picking on Josh, but Russell Wilson in the fifth is also a tough pick for me to like, even more so in hindsight too with Kyler Murray going in the seventh and Deshaun Watson going in the ninth.

However, the biggest blunder of the draft goes to Tony for only selecting one quarterback in a Best Ball league. I needed to know how that happened so I spoke with Tony and he said “I put Drew Lock in my queue a few picks before mine and he wasn’t close to next on the quarterback list. I was busy with something that came up mid-draft and I missed the pick, but just assumed I got Lock and moved forward with the draft as if I did. Immediately after the draft, I realized that I didn’t get Lock and I probably screwed myself out of having any chance of winning this league.” I feel bad for Tony, but I also think people can learn something from this. Never assume that people are going to draft based on a site’s rankings and always make sure a pick went how you planned if you have to use a queue for a brief period of time. With that being said, if you are going to only have one quarterback, he got one of the two that you want to have. If Jackson can stay healthy and play all 16 games, he could still possibly have a chance.

While I don’t like how my team turned out, I still had a blast with this kickoff draft. We plan on doing plenty more of these, so if you want to get in on the action, follow me on Twitter @JustinVreeland and send a DM my way. I look forward to seeing more of you in them!

NFL Glazer: Drew Brees will retire at end of season

A. Brown - WR
TB1
Antonio Brown caught 1-of-3 targets for 10 yards in the Bucs' Divisional Round win over the Saints.
Brown wasn't targeted in the second half as he stood on the sideline with what appeared to be an injury. It was Scotty Miller and Tyler Johnson soaking up snaps behind Mike Evans and Chris Godwin. Brown will have the week to get ready for next Sunday's NFC title game against the Packers.
Added Yesterday 10:49 pm (EST)
Added Yesterday 10:49 pm (EST)

T. Smith - WR
NO1
Tre'Quan Smith caught all three of his targets for 85 yards and two touchdowns in the Saints' Divisional Round loss to the Bucs.
He caught a 56-yard score on a flea-flicker trick play from Jameis Winston before then making an incredible adjustment for a second score at the front right pylon on Drew Brees' lone touchdown pass of the game. Smith led the Saints in receiving. During the regular season, Smith posted a 34-448-4 line on 50 targets, setting new highs in targets, catches, and yards as the Saints' third wideout. A big-play receiver, maybe Smith will get more of a chance in 2021 if Emmanuel Sanders leaves town and the Saints also become more aggressive down the field. Smith will be entering the final year of his rookie deal.
Added Yesterday 10:46 pm (EST)
Added Yesterday 10:46 pm (EST)

R. Gronkowski - TE
TB1
Rob Gronkowski caught 1-of-5 targets for 14 yards in the Bucs' Divisional Round win over the Saints.
His missed connections were tough throws and would have required diving, sprawling grabs. Gronkowski is a favorite of Tom Brady in the red zone alongside Mike Evans, but his counting stats haven't been there much this season in a loaded offense. Gronkowski will be a TD-dependent proposition next weekend at Green Bay in the NFC title game.
Added Yesterday 10:44 pm (EST)
Added Yesterday 10:44 pm (EST)

C. Godwin - WR
TB1
Chris Godwin caught 4-of-7 targets for 34 yards in the Bucs' Divisional Round win over the Saints.
Godwin's biggest play was a third-down catch on a slant on the final drive that produced a first down and helped salt away the clock. He very nearly made an incredible touchdown catch in the back of the end zone earlier in the evening but was unable to control the ball as he went to the ground despite beating the safety on the deep shot and getting two feet in bounds on the play. Godwin has been up-and-down this season in a loaded offense. He gets the Packers next week in the NFC title bout.
Added Yesterday 10:41 pm (EST)
Added Yesterday 10:41 pm (EST)

J. Cook - TE
NO1
Jared Cook caught 5-of-6 targets for 28 yards in the Saints' Divisional Round loss to the Bucs.
Cook had one to forget, losing a fumble in the open field that led to a Bucs touchdown the other way several plays later, and then he had a Drew Brees pass go through his hands and into the arms of a defensive back for an interception to seal the eventual loss in the fourth quarter. On the year, Cook, 34 in April, caught 37-of-60 targets for 504 yards and seven touchdowns across 15 games. Cook finished the year as the overall TE19 in half-PPR points per game. His best days are well behind him, even if Cook still offers some athleticism. Cook will head to free agency in March.
Added Yesterday 10:36 pm (EST)
Added Yesterday 10:36 pm (EST)

R. Jones - RB
TB1
Ronald Jones rushed 13 times for 62 yards in the Bucs' Divisional Round win over the Saints.
He failed to catch his lone target in the passing game and was out-touched 22-13 by Leonard Fournette, who piled up 107 yards and one touchdown. Jones played through a quad issue that was noticeably bothering him on a long run that was eventually called back on a penalty. He'll get another week to rest his leg ahead of the NFC title date with the Packers at Lambeau. The cold weather won't be friendly to Jones' quad. Look for Fournette to again pace the Bucs backfield in that one.
Added Yesterday 10:34 pm (EST)
Added Yesterday 10:34 pm (EST)

A. Kamara - RB
NO1
Alvin Kamara rushed 18 times for 85 yards and caught 3-of-6 targets for 20 yards in the Saints' Divisional Round loss to the Bucs.
It was Kamara's ninth 100-yard game of the season after he accomplished the feat seven times during the regular season. Kamara looked well on his way to a mammoth receiving year, but his receiving numbers flat-lined for a stretch when Taysom Hill was the quarterback for a month when Drew Brees was out with broken ribs. Kamara's season ended with 187 rushing attempts for a career-high 932 yards and 16 scores on the ground. He also set career-highs with 107 targets for 83 grabs, 756 yards, and five scores through the air. Kamara was rewarded with a long0-term extension in 2020 and will be the focal point of the Brees-less Saints offense in the coming years. Kamara will be a top-three fantasy pick next summer.
Added Yesterday 10:27 pm (EST)
Added Yesterday 10:27 pm (EST)