Justin Vreeland takes a look at the running back landscape following the NFL Draft. 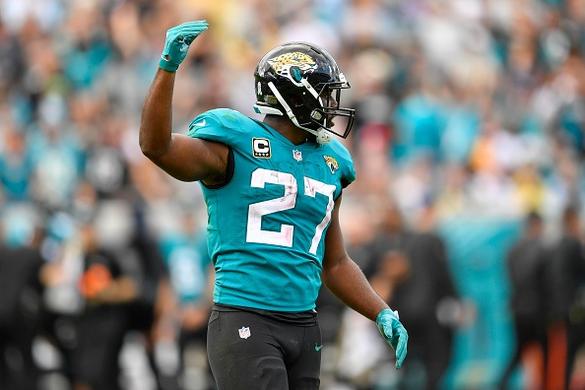 Welcome to the sixth edition of the RB previews! Last week we previewed the rookie RB class and what each of their landing spots meant for their fantasy value. This week we are going to take a look at the incumbent backs around the league and whose stocks are up or down post-draft. Without further ado, let’s dive in!

Leonard Fournette (Jaguars) – With all of the trade rumors that have been surrounding Fournette, many expected the Jags to look for their next running back somewhat early in the draft. Not only did they not take one early, they didn’t take one at all. Jacksonville has already declined the fifth-year option on Fournette, likely making this his final season on the team, but it appears that they will use him as their workhorse back once again this season. This is great news for his fantasy stock, as you can expect another season with 300-plus touches from your second round pick. He is coming off his best season as a pro, rushing for 1152 yards and hauling in 76 passes for an additional 522 yards. Finding the end zone a bit more than three times would be a huge boost.

Todd Gurley (Falcons) – Atlanta didn’t add any running backs to their roster in the draft and that is great news for Gurley. He is coming off a very disappointing season and he still has those bad knees, but the change of scenery could do him some good and he doesn’t have a whole lot of competition for touches. I wouldn’t be surprised if he returns to the 50-reception mark that he surpassed in back-to-back seasons prior to last year. That being said, it’s still very difficult to envision Gurley returning to anything near the level of player he was in 2017 and 2018. While the draft didn’t hurt his fantasy stock for this year, it also didn’t fix his knees.

David Montgomery (Bears) – Montgomery was very hyped up by many (including myself – unfortunately) heading into 2019 and it was a big swing and a miss. He let everyone down. He finished his rookie season with 889 rushing yards, seven total touchdowns, 25 receptions, and 185 receiving yards. Not great; however, the Bears didn’t draft any running backs this year and are committed to Monty. He is their starter and he will get the majority of the touches, with Cohen mixing in and getting most of the receiving work. The Bears were a bottom-five offense last season and there really isn’t anywhere to go but up. He could provide the season that we were all hoping for last season this season and at a cheaper price tag (he has zero hype now).

Jordan Howard (Dolphins) – The Dolphins did not draft a running back this year, but they did add Matt Breida via a trade. That is great news for Howard, as he looks locked into a heavy role this year. Breida is a change-of-pace back with durability issues. Howard should get a ton of early down work and he will likely get the majority of the goal line touches as well. His fantasy upside isn’t overly high, as he probably won’t catch too many passes, but he should be a factor this season and is a great value in standard leagues. Miami hasn’t had a back rush for at least 750 yards since 2016, a streak that I believe Howard will end this season.

Devin Singletary (Bills) – Just as we all are getting excited for a post-Gore big sophomore season breakout for Singletary, the Bills go and draft Moss in the third round of the draft. Singletary is still locked in as the starter and he should get at least 60-percent of the RB touches, but his volume is now likely far less than originally projected pre-draft. Personally, I like how this has lowered his ADP, as I still have high hopes for him this season and he will be a frequent target of mine in fantasy drafts (his ADP has dropped from 27 pre-draft to 35 post-draft).

Mark Ingram (Ravens) – If you caught the rookie preview piece from last week, you know I don’t care for Dobbins’ fantasy value with the Ravens. Well, I also hate it for Ingram’s value as well. While Dobbins is a good fit for the Ravens in real life, it is bad news for his and Ingram’s fantasy value. We are likely looking at a timeshare that also gives a handful of carries to Gus Edwards , while Lamar Jackson also runs the ball a bunch. There are only so many touches to go around and with so many mouths to feed, it’s hard to envision Ingram rushing for 1000 yards or 10 touchdowns again this season (like he did last year in his first year with Baltimore).

Damien Williams (Chiefs) – The Chiefs can call Williams their starter all they want, but you don’t select a running back in the first round of the draft if you don’t plan on using him heavily. Williams has had durability issues and he is in the final year of his contract with the Chiefs. He will still have a big role this season with KC, but expecting anything more than a timeshare by mid-season wouldn’t be wise for fantasy purposes; Edwards-Helaire will get plenty of work and it will grow as the season goes. His ADP has dropped from 48 pre-draft to 76 post-draft (as much as I like CEH, Williams at 76 is a pretty good value).

Marlon Mack (Colts) – I like Mack and the numbers show he is a rock solid running back who warrants being a starter, but the Colts went ahead and drafted Taylor in the second round anyways. Very bad news for Mack. He will perform well for the Colts in real life, but a lack of volume will be very detrimental to his fantasy value and a big drop-off in production should be expected. Do not expect a repeat of his 2019 performance, in which he rushed for 1091 yards and eight touchdowns across 14 games.

Kerryon Johnson (Lions) – Johnson really hasn’t been a big time fantasy contributor at any point in his career thus far. Now, with the Lions drafting Swift in the second round, Johnson’s fantasy outlook is beyond bleak. Detroit has given up on Johnson (even though they won’t admit it) and you should too.

NFL Fields to see 'a lot' of preseason playing time

NFL Nick Chubb 'in talks' with Browns about extension

F. Clark - DL
KC
Chiefs DE Frank Clark was arrested Sunday night in Los Angeles for felony illegal possession of a firearm.
According to a police report, Clark had an Uzi in a duffle bag in his SUV, discovered during a routine traffic stop Sunday evening. Clark was booked in L.A. County jail Monday morning and remains behind bars. Clark entered the NFL with an off-field history after being kicked off the Michigan football team. Acquired from the Seahawks prior to the 2019 season, Clark has 14 sacks across 31 regular-season games for the Chiefs the last two years.
Added Yesterday 6:26 pm (EST)
Added Yesterday 6:26 pm (EST)

T. Moehrig - DB
LV
Raiders signed second-round S Trevon Moehrig to a four-year contract.
Moehrig (6'2/202) was the consensus No.1 safety in the 2021 class for good reason, reportedly falling to the second round due to the back injury he suffered at his pro day. Not only does Moehrig sport a tall, strong build for the position, but he has all the athletic tools necessary to thrive in the league. Moehrig sprinted to a 4.50 40-yard dash and a 4.19 short-shuttle, both of which are just a touch above average for a safety. Moehrig's film is littered with quick feet to help him reposition throughout routes, smart eyes to trigger on the ball early, and a violent nature when attacking the ball. Moehrig also has the silky hips and natural feel to play man coverage adequately. Moehrig is a fit for any scheme and projects to have a Harrison Smith style do-it-all presence.
Added Yesterday 4:17 pm (EST)
Added Yesterday 4:17 pm (EST)

T. Moehrig - DB
LV
Cardinals first-round LB Zaven Collins was arrested for reckless driving in Scottsdale, Arizona on Sunday.
He was taken into custody late Sunday evening and released a short time later. There has been no comment from either the Cardinals or Collins, who could face disciplinary action from the league as a result of the arrest. As it stands, the No. 16 overall pick is still slated to start across from 2020 first-rounder Isaiah Simmons to open the year.
Added Yesterday 4:12 pm (EST)
Added Yesterday 4:12 pm (EST)

M. Jones - QB
NE
Sports Illustrated's Albert Breer reports Mac Jones "has done enough in the spring to merit a real competition with Cam Newton in the summer."
Breer said Patriots head coach Bill Belichick has never used May and June practices to determine Week 1 starters, but rather to clean up fundamentals and improve conditioning. "The real test, to me, was always going to be in training camp, and more specifically when the pads go on," Breer said. "If Jones is out there with the first offensive-line group then, even if it’s just a percentage of those snaps, then I’d say we know something is afoot." Last week, The Athletic's Jeff Howe reported Jones was the team's best QB during minicamp. Though Belichick has taken every opportunity to heap praise on Newton this offseason, there seems to be a real chance Jones is under center for New England's opener against Miami, making Patriots pass catchers and running backs far more appealing in fantasy football.
Added Yesterday 12:48 pm (EST)
Added Yesterday 12:48 pm (EST)

A. Collins - RB
SEA
ESPN's Brady Henderson reports RB Alex Collins "appeared to receive the most reps of any Seattle running back" in offseason practices with Chris Carson, Travis Homer, and Rashaad Penny absent.
Penny is still recovering from knee surgery, Homer is struggling with a calf issue, and Carson missed minicamp due to personal matters. Collins, 27 in August, appeared in three games for Seattle in 2020, turning 18 carries into 77 yards and two touchdowns. Once a workhorse for the Ravens, Collins profiles as the likeliest primary rusher if Carson and Penny miss time in 2021. Homer is more of a pass-catching specialist when healthy. Collins could be a much sought-after waiver wire add for RB-needy teams this season if he makes the Seahawks final roster.
Added Yesterday 12:07 pm (EST)
Added Yesterday 12:07 pm (EST)

N. Gray - TE
KC
ESPN's Adam Teicher said "it's easy to see" how rookie TE Noah Gray "could get a significant amount of playing time" in 2021.
Teicher expects Gray -- a fifth rounder out of Duke -- to play in Kansas City's multiple tight end sets. The rookie could, per Teicher, see extended playing time if the Chiefs rest Travis Kelce during parts of the NFL's new 17-game season. Patrick Mahomes dropped back 96 times last season in multiple tight end sets, throwing for 899 yards and nine touchdowns with zero picks while taking just one sack. Gray, Duke's all-time leading tight end, has stood out in KC's offseason practices as a potential weapon in the team's already-explosive passing attack. He looks like a decent late-round flier in tight end premium formats this summer.
Added Yesterday 11:32 am (EST)
Added Yesterday 11:32 am (EST)

D. Kizer - QB
TEN
ESPN's Turron Davenport reports QB DeShone Kizer has a chance to win the Titans' No. 2 QB spot.
Davenport hinted Kizer has the edge on QB Logan Woodside because his "skill set is very similar to Ryan Tannehill's in that he can make most of the throws and is adept at making plays on the move." Kizer, who served as Tennessee's "quarantine QB" in 2020, has 11 touchdowns and 22 interceptions since entering the league with Cleveland in 2017. He comes with some rushing upside; in 2017, he rushed 77 times for 419 yards and five scores in 15 games for the Browns. Kizer, of course, would be a disaster for Titans pass catchers if Tannehill were to miss time in 2021.
Added Yesterday 10:53 am (EST)
Added Yesterday 10:53 am (EST)