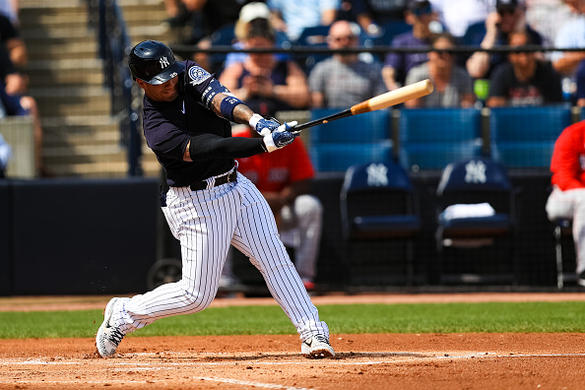 Welcome to the sixth and final edition of the second base previews! This week we are going to take a look at players who have a noticeable difference in their first half and second half of season splits. With what will likely be a shortened season due to the coronavirus, it may be very important to take note of players who normally start the season hot or cold. There could be other reasons as to why players do better or worse in the first half or second half (like the weather), so this isn’t the end-all, be-all, but it is worth noting. Players who take a while to find their groove could be poor fantasy targets this season and vice versa. Without further adieu, let’s dive in!

Gleyber Torres (Yankees) – Torres is already being drafted as the first second baseman off the board in fantasy drafts and a shortened season could further increase his value. Though it’s only a two season sample, Torres has been a hot starter in his career, slashing .293/.356/.539 in the first half while slashing .255/.318/.478 in the second half. To this point the final month of the season has been his worst, as he slashed .235/.280/.434 across 45 games. It is possible that the long season wears him down, but that wouldn’t be an issue this year. Torres is a fine target at his current ADP and he is a very safe pick to produce high totals in home runs, RBI, and runs scored for the position. He enters his age-23 season coming off a 38 home run campaign last year.

Max Muncy (Dodgers) – Muncy has been somewhat of a hot starter in his career. I say somewhat because the first month hasn’t been great for him, but he finds his groove in the second month and he has slashed .282/.382/.549 in the second month of the season (no other month has he hit over .258). His career first half slash line is .259/.371/.525 with 0.22 home runs per game, compared to his second half slash of .223/.355/.468 with 0.18 home runs per game. A hot start without the fade down the stretch run of the season is possible and it could lead to a career best slash line for Muncy. Pay for the home run, RBI, and run scoring production that he brings and hope that the shortened season means a better than expected batting average.

Rougned Odor (Rangers) – Odor is another player that I was already fading before checking over his splits, but the splits make fading him even easier. For his career he has a .237/.288/.416 slash with 0.14 home runs per game in the first half of the season. His second half slash is .244/.298/.464 with 0.19 home runs per game, so while the average is pretty close, the power has come later in the year for Odor. The first month of the season is by far his worst, as he has slashed .195/.272/.328 with nine home runs across 97 career games in the first month of seasons. The second month is his next worst with a .219 average and 15 home runs. He has at least a .229 average and 24 home runs in all other months. This slow start trend continued last season as well, as Odor slashed .193/.258/.396 with 13 home runs in the first half before slashing .218/.309/.484 with 17 home runs in the second half. A slow start would be dreadful for a guy you should have already looked to avoid owning in fantasy this year.

Robinson Canó (Mets) – Cano has a lengthy amount of time in the majors and he has been a slow starter throughout his career. He has slashed .294/.345/.473 with 0.14 home runs per game in the first half, which is pretty damn good, but it fails to compare to his second half career slash of .312/.362/.512 with 0.16 home runs per game. For his career, his two worst months are the first two months of the season. It was even worse last season when he slashed .240/.287/.360 with four home runs across 65 games in the first half before slashing .284/.339/.541 with nine home runs across 42 games in the second half. Age has started to catch up with Cano and a slow start would just demolish his value this year altogether. I wouldn’t bank on much production out of him.

This concludes our second base previews; I hope you enjoyed them! Follow me on Twitter @JustinVreeland and I’ll answer any questions you may have.

The rest of the previews for this position can be found below:

J. Nelson - SP
LA
Dodgers declined RHP Jimmy Nelson's $2 million option for 2021.
Instead, the oft-injured right-hander will receive a $500,000 buyout. Nelson underwent surgery on his lower back in early July and missed the entire 2020 sprint season. Once considered one of the top starting pitchers in the National League, Nelson has logged a total of 22 innings at the big league level since the 2017 season. Still, he'll make for an intriguing low-cost reclamation project in free agency this winter.
Added 7:42 pm (EST)
Added 7:42 pm (EST)

R. Brothers - RP
CHI
Cubs sent LHP Rex Brothers outright to Triple-A Iowa.
The 32-year-old hurler only appeared in three games for the Cubs in 2020, posting an underwhelming 8.10 ERA, 1.50 WHIP and 8/3 K/BB ratio over 3 1/3 innings. Assuming that he accepts the outright assignment, Brothers will continue to function as organizational bullpen depth for the Cubs in 2021.
Added 7:25 pm (EST)
Added 7:25 pm (EST)

A. Wainwright - SP
STL1
David O'Brien of The Athletic reports that the Braves have expressed interest in free agent right-hander Adam Wainwright.
The 39-year-old right-hander had a resurgent season in 2020, registering a 3.15 ERA, 1.05 WHIP and 54/15 K/BB ratio over 65 2/3 innings. Wainwright -- a native of Georgia -- would add much-needed experience to a very inexperienced Braves rotation. O'Brien notes that the Braves have already reached out to Wainwright to make their interest known. It's hard to imagine Wainwright leaving the Cardinals if they want to bring him back, but if the two sides part ways the Braves seem like a very logical destination.
Added 6:37 pm (EST)
Added 6:37 pm (EST)