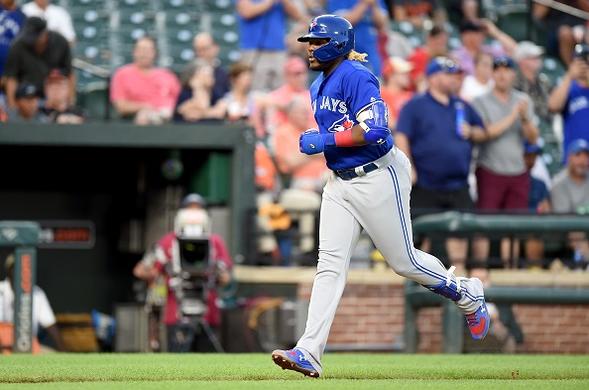 It’s Tuesday, which means it’s Stock Watch day! It seems like every week now there are a few rookies to breakdown and this week is no different, with four rookies to look at! We also have three veterans who recently changed teams, two of which have performed well with their new club, while the other has been a dumpster fire since the switch. Without further ado, let’s dive in!

Vlad Guerrero Jr., 3B TOR – Th youngster was in the June 25 Stock Watch as a stock faller, part of what I said was: “Sure, his 40.3-percent hard contact rate and 90.8 mph exit velocity are both strong, but that doesn’t do him a whole lot of good when he has a dreadful 6.8-degree launch angle and is pounding the ball into the ground 48.3-percent of the time. His 17.4-percent line-drive rate and 34.2-percent flyball rate are both lousy, especially when considering the type of hitter he is supposed to be. Right now is the perfect time to buy-low on Vlad in fantasy, as a quick turnaround could take place at any moment.” Well, despite only improving on each of those numbers slightly (17.7-percent line-drive, 35.0-percent fly ball, 7.6-degree launch angle) since then, he has been on fire lately; hitting .438 (28-for-64) with five home runs and 23 RBI over his last 16 games. The streak has been fueled by a bit of good fortune though, with a .451 BABIP over that span. However, he has cut back on his strikeouts in a big way (just eight strikeouts over those 16 games) and that has led to an increase in batting average.  He should be a strong fantasy asset the rest of the way. 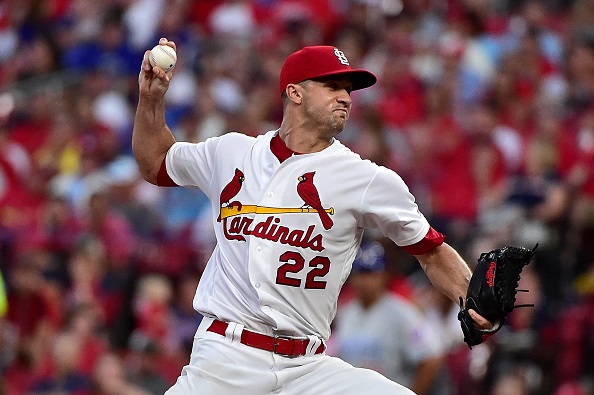 Jack Flaherty , SP STL – Many were high on Flaherty, myself included, coming into the year and it looked like he was going to be a huge disappointment for the entire season. Through 17 starts, he had an unsightly 4.90 ERA with 101 strikeouts over 90.0 innings pitched. However, he has given up just four earned runs over his last five starts across 31.1 innings pitched for a 1.15 ERA. He gave up just 15 hits in that span while striking out 39. The strong recent success brings his season totals up to a 3.93 ERA with 140 punch-outs across 121.1 innings. When we look at the underlying numbers for him this year it’s a bit of a mixed bag, but does contain some very strong points; he is inducing soft contact at a 23.1-percent rate, which is the fourth-best mark in all of baseball. He is in the top-25 of WHIP (1.15) and in the top-20 of both infield fly ball rate (11.7-percent) and strikeout percentage (28.1-percent). Two major areas of concern are his 1.56 HR/9 (eleventh-worst in baseball) and his 24.2-percent line-drive rate against (fifth-worst in the league). With all that being said, this is a talented young pitcher who should be a strong fantasy asset going forward.

Jesús Aguilar, 1B TB – Now that Aguilar is a member of the Rays, he should see a heavy dose of playing time. Since joining the club, he is 5-for-11 with a home run and three walks in his first four games. Yes, he has been abysmal this year, but he did have 35 home runs, 108 RBI, and a .274 batting average last season, so it’s very possible that he could be a fantasy asset with his new team. Even prior to joining Tampa, he was playing well with the Brew Crew as of late, hitting .298 with three home runs in the month of July. This year, his 90.1 mph exit velocity, 14.9-degree launch angle, and 40.4-percent hard contact rate are all well above league average. He has hit cleanup and third in the Rays lineup the past two games and if he continues to hit in the heart of the order he should have plenty of RBI opportunities with Austin Meadows and Tommy Pham in front of him.

Luis Urías , 2B SD – Urias seemingly can’t produce at the MLB level. He is hitting a lousy .113 with one home run, one RBI, and zero steals in 24 games for the Padres this year (62 at-bats) and that is after hitting .208 across 48 at-bats last year. Yes, 110 career at-bats is a small sample, but a .155 batting average in that span does not inspire much confidence. He hasn’t really been that unlucky either, with a .195 xBA this year. Many of his underlying numbers are very ugly, including a 85.4 mph exit velo, 27.3-percent hard contact rate, and a .303 xSLG, all of which rank well below league average. Obviously there is still plenty of time for him to turn his career around and he is only 22 years old, but I would not be afraid to dump him in any size redraft league.

Andrew Cashner , SP BOS – Cashner has been horrendous since joining Boston, pitching to a 6.94 ERA across his first four starts with the club. He has given up 31 hits and 10 walks in that span (23.1 innings) while only striking out 16. He hasn’t been a good pitcher for a while, but he was at least providing deep league appeal while with the Orioles and it’s a bit odd that switching to a better team with a better pitcher’s park has somehow hurt his value. Given his recent struggles and his poor 6.17 K/9, he doesn’t really have any appeal right now to any fantasy league. He won’t continue to be this bad for the Red Sox, but it’s unlikely that he gets to a level of production that makes him roster worthy.

Merrill Kelly , SP ARI – Kelly pitched very well in a nine-game span from June 2 to July 18, posting a 2.67 ERA in that span, but he has now followed that up with three-straight stinkers; in his last three starts, he has given up a total of 17 earned runs across 14.1 innings pitched, good for a 10.67 ERA. The long ball has killed him in those starts, serving up six home runs. He has very severe home/road splits this year, pitching to a 3.84 ERA at home with 63 strikeouts across 65.2 innings pitched, while pitching to a 5.21 ERA with 41 strikeouts across 65.2 innings pitched on the road. Random thought, it’s pretty remarkable that he has the exact same number of innings pitched at home and on the road. His current 4.52 ERA for the year lines up very well with his 4.61 FIP, 4.68 xFIP, and 4.78 SIERA. He has done a very poor job of inducing soft contact this year, as his 13.3-percent soft contact rate against ranks as the third-worst mark in all of baseball. Given his home/road splits and overall inconsistency, Kelly is more of a streaming option than a full-time roster guy. 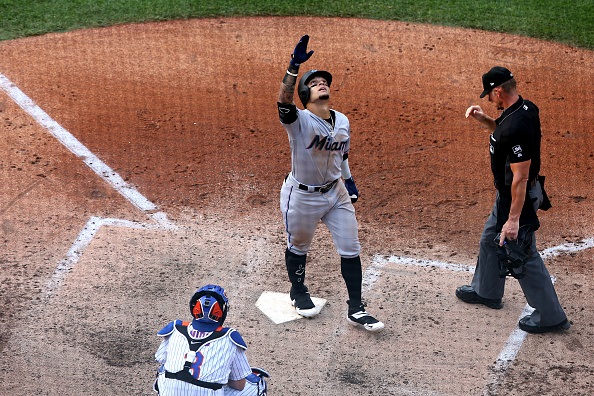 Isan Díaz, 2B MIA – Diaz is a top-100 prospect and anytime someone like that gets called up the fantasy baseball world goes crazy. He had great numbers at Triple-A, hitting .305 with 26 home runs and 70 RBI across 102 games played. So why isn’t he a stock riser like Bichette was last week, you ask? For starters, he isn’t as highly touted of a prospect as Bichette is, but that’s of lesser concern for me than some of the other reasons. My two biggest issues with Diaz are really out of his control, the surrounding Miami lineup is dreadful and ranks 29th in runs scored this season. That type of lackluster team production will lead to fewer RBI and run chances. There are zero threats in the Marlins lineup, which means regardless of where he hits, he will not have protection. Lastly, his home ballpark ranks 28th in home run factor, which is obviously far from ideal for a power guy. I don’t see him having much fantasy value outside of deep leagues.

Jordan Lyles , SP MIL – Lyles has been a roller coaster of good and terrible this season, but through two starts with the Brewers he has a 1.80 ERA across 10.0 innings pitched. He has picked up a win in both of those starts and playing for the Brewers and their explosive offense should continue to allow him to win at a higher rate than what he did with the Pirates. It is also worth noting that, he has a better home ballpark now, as Miller Park is 11th in runs factor while PNC Park ranks 2nd. One big thing to be aware of is, that while his overall line isn’t great this season, in large part it was due to having to face the Brewers, his current team hammered him to a 6.00 ERA across three starts against them while he was a member of the Pirates. He has some deep league appeal thanks to the strong outings that he can provide as well, his increased shot at picking up wins, and his very solid 9.26 K/9.