Fantasy Baseball Daily Round Up: May 12 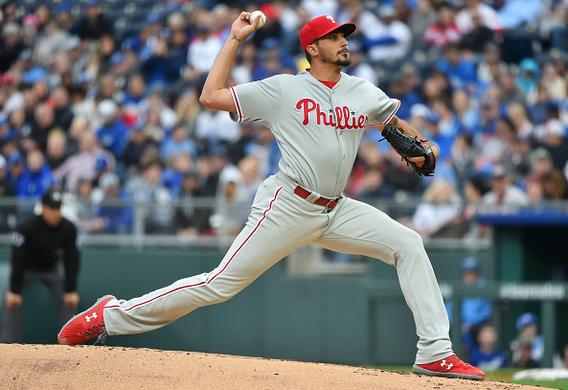 Zach Eflin tossed a complete game shutout over the Royals in the Phillies 7-0 victory. He allowed just four hits and zero walks while striking out seven and throwing 110 pitches. Of his seven strikeouts, six were looking (the below video will show he got a little help from the umpire on a few of them). Eflin was the second highest scoring player on both FanDuel and DraftKings (Cole first on both). It was Eflin’s second complete game in his last three starts and he has allowed just two earned runs over his last 25.0 innings pitched in that time frame. He isn’t striking out hitters at a high rate with only 38 punch outs through 51.0 innings pitched this season, but fantasy owners can’t complain about his five wins, 2.47 ERA, and 1.02 WHIP. He will have a tougher test in his next outing when he takes on the Brewers. 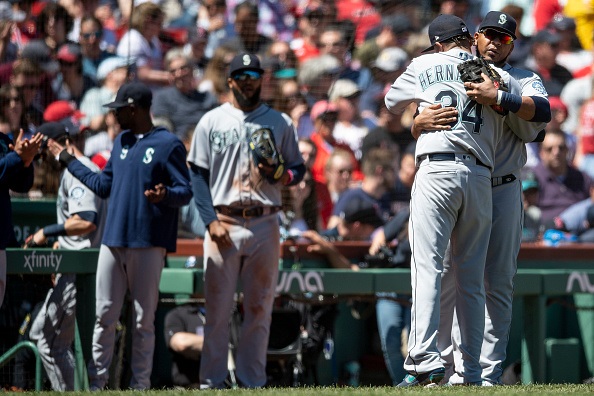 Félix Hernández has been a shell of his former self for a while now, but he did pick up career strikeout number 2,500 in a crushing defeat against the Red Sox. From 2008-2015, Felix was consistently among the best pitchers in baseball, but it’s been all downhill for him since then; nonetheless, 2,500 career strikeouts is a big accomplishment and he became just the 36th pitcher in the history of baseball to reach the mark. His current resume still has the looks of a future Hall of Famer, but it’s remarkable that he put together that resume nearly entirely before the age of 30. The last couple of seasons have put a blemish on his career though, as he has posted an under .500 record while pitching to the tune of an over 5.00 ERA.  Some other career accomplishments for the King include a Cy Young, two ERA titles, and six all-star appearances.

Ronny Rodríguez had a double-dong, finishing 2-3 with two solo home runs and a walk. It was his first career multi-homer game and he now has five home runs, 14 RBI, and a .323 average through 17 games played. He is tied for the Tigers team lead in RBI, despite half the at bats of co-leader Cabrera.

Ronny Rodriguez of the @tigers has a pair of solo home runs today.

Albert Pujols led all hitters in scoring yesterday, finishing 3-5 with two home runs, three RBI, and three runs scored. In his first game since hitting the 2,000 career RBI mark, Pujols put on a show. It was his first multi-homer game of 2019 and he now has eight home runs and 21 RBI on the season.

Yandy Díaz also had a double-dong day, finishing 2-5 with the two home runs and four RBI. Diaz had been in a bit of a drought, with his last home run coming on April 27, but he broke out of it in a big way yesterday. The home runs were his eighth and ninth of the season.

Yasiel Puig had a bash-and-dash, finishing 2-4 with a home run, a steal, and two RBI. Puig has mostly been a disappointment thus far this season, but it was second straight multi-hit game and his third straight game with a steal. He now has six home runs and seven steals, which would be great if he could improve on his .214 batting average a bit.

Avisaíl García had a bash-and-dash game of his own, going 2-4 with a home run, a steal, and two runs scored. He now has six home runs and three steals to go along with a .283 batting average. His 14 RBI leave a lot to be desired, but he isn’t a bad own in deep leagues.

Wil Myers didn’t want to be left out, providing us with a rare three different player bash-and-dash day. Myers also finished 2-4 with a home run, a steal, and two runs scored. His .240 average and 15 RBI aren’t really doing fantasy owners any favors, but his seven home runs and four steals are rock solid contributions.

C.J. Cron went 4-5 with a home run, a double, and three RBI in the second game of their double-header after swatting a home run in the first game. It was his second four-hit game in his last three games and he is now hitting .261 with nine home runs.

Michael Conforto played well again yesterday, finishing 2-3 with a home run, a walk, and two RBI. Over the past two games, Conforto has compiled five hits in six at bats, swatted two home runs, and drove in three runs. For the season, Conforto is hitting .274 with eight long balls, three steals, 18 RBI, and 24 runs scored.

Edwin Jackson was acquired by the Blue Jays and he will set a MLB record when he pitches for them as it will be the fourteenth different team that he has played for.

Tyler Glasnow and Mike Zunino are expected to miss 4-6 weeks and 4-5 weeks, respectively. A tough blow for the Rays, as Glasnow was pitching like a Cy Young contender and Zunino is their starting catcher. 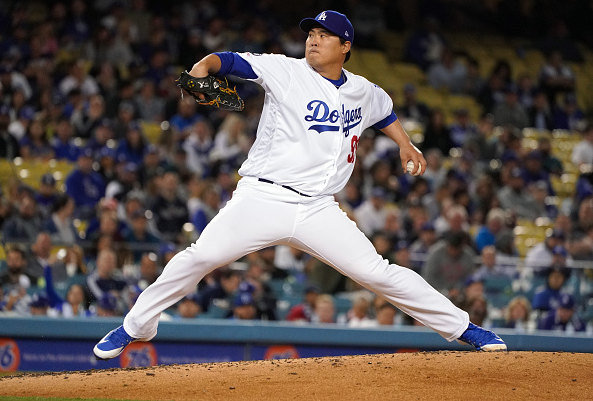 Stephen Strasburg vs. Hyun-Jin Ryu . This is the top pitching duel of the day and should be a low scoring affair. Ryu enters today’s action with the fifth best ERA in baseball amongst qualified pitchers with his 2.03 mark. His 0.81 WHIP is second only to Paddack.

Caleb Smith vs. Noah Syndergaard . Not quite the pitching matchup on paper that Stras and Ryu are, but this one should be very good as well. Smith enters today’s action with the seventh best ERA in baseball at 2.11 and the fourth best WHIP at 0.89.

Martín Pérez will attempt to improve to 6-0 on the season when he takes on the Tigers. He comes into today’s start with a 2.83 ERA and has struck out 39 across 41.1 innings. This is a good matchup (on paper) for Perez to continue his strong run.

B. Buxton - CF
MIN
Byron Buxton (family) has arrived in Minneapolis and is being processed through MLB's intake testing protocol.
Buxton was excused from the first weekend of summer camp following the arrival of his second child on Friday. His coronavirus test results should be ready around the middle of the week, and if he's in the clear, he'll be given the go-ahead to join the workouts happening at Target Field. The 26-year-old played well last season when healthy and could be a highly valuable multi-category producer in MLB's planned 60-game sprint.
Added Yesterday 10:01 pm (EST)
Added Yesterday 10:01 pm (EST)

J. Guerra - RP
ARI
Junior Guerra has tested positive for COVID-19, Diamondbacks manager Torey Lovullo announced Sunday.
Silvino Bracho also tested positive. Guerra was signed to a one-year, $2.55 million free agent contract in December and could be a valuable bullpen piece for Arizona in this condensed campaign given his ability to work multiple innings in relief. He had a 3.55 ERA, 1.12 WHIP, and 77/36 K/BB ratio in 83 2/3 innings (72 appearances) last season with the Brewers. The 35-year-old right-hander will be put in quarantine and must pass two consecutive COVID-19 tests before he is allowed to return to the D-backs.
Added Yesterday 9:49 pm (EST)
Added Yesterday 9:49 pm (EST)

A. Heaney - SP
LAA
Angels manager Joe Maddon confirmed Sunday that Andrew Heaney is locked in as the team's Opening Day starter.
It will be the first career Opening Day start for Heaney, who struck out 118 batters over 95 1/3 innings last season and spent the shutdown period working further and further away from the elbow and shoulder issues that have recently plagued him. He's a worthy mid-to-late round pick in fantasy drafts this summer.
Added Yesterday 9:23 pm (EST)
Added Yesterday 9:23 pm (EST)

K. Yates - RP
SD
Kirby Yates is expected to do his intake testing on Monday and Tuesday.
And if he's clear of COVID-19, he could participate in his first summer camp workout on Wednesday. Yates was late arriving to camp due to a positive diagnosis within his family. The 33-year-old right-hander should be among the first relievers off the board in summertime fantasy drafts after posting a 1.19 ERA and 101/13 K/BB ratio over 60 2/3 innings least season while leading all MLB closers in saves with 41.
Added Yesterday 9:19 pm (EST)
Added Yesterday 9:19 pm (EST)

S. Bracho - RP
ARI
Diamondbacks manager Torey Lovullo announced Sunday that Silvino Bracho and Junior Guerra have tested positive for COVID-19.
It's unclear whether the cases were diagnosed through MLB's intake testing protocol or before. Either way, the two pitchers will be absent from summer camp workouts until they pass consecutive COVID-19 tests. Bracho suffered a recent setback in his recovery from Tommy John surgery, so it's unclear how much he is able to do at the moment anyway. Guerra signed a one-year, $2.55 million deal with Arizona in December.
Added Yesterday 9:11 pm (EST)
Added Yesterday 9:11 pm (EST)

F. Perez - SP
DET
Tigers RHP prospect Franklin Perez (shoulder) threw a bullpen session this weekend at Tigers summer camp.
Perez resumed working from a mound in February after taking several months off to a heal a shoulder issue, and it looks like he should be able to pitch in intraquad games at some point this summer. The 22-year-old was included in the Tigers' initial player pool, but it's unclear whether he'll see any actual MLB action.
Added Yesterday 8:53 pm (EST)
Added Yesterday 8:53 pm (EST)

F. Mejía - C
SD
AJ Cassavell of MLB.com writes that Francisco Mejia has "looked sharp" in the Padres' first two intrasquad games.
Mejia went 0-for-15 in the Cactus League this spring, but it's always been silly to draw any conclusions from spring training numbers. The 24-year-old former top prospect would seem to be a good option for the Padres at DH and should get a boost in fantasy value with the addition of that role to the National League scene. He's a sneaky post-hype breakout candidate heading into MLB's planned 60-game 2020 campaign.
Added Yesterday 8:28 pm (EST)
Added Yesterday 8:28 pm (EST)

K. Lewis - LF
SEA
Mariners manager Scott Servais praised Kyle Lewis' physical condition during a Zoom call with reporters on Sunday.
Lewis finally put his knee issues in the rearview last season and in September delivered an .885 OPS with five home runs over his first 18 major league games. He used the shutdown to work with private hitting, speed, and strength coaches. “Coming back from a very serious knee injury, it takes time,” Servais said. “You might be physically strong and everything checks out, but it’s always in the back of your head. That’s what it looks like to me, that it’s kind of freed him up now. ... The ceiling, the upside for Kyle, the sky is the limit."
Added Yesterday 8:10 pm (EST)
Added Yesterday 8:10 pm (EST)