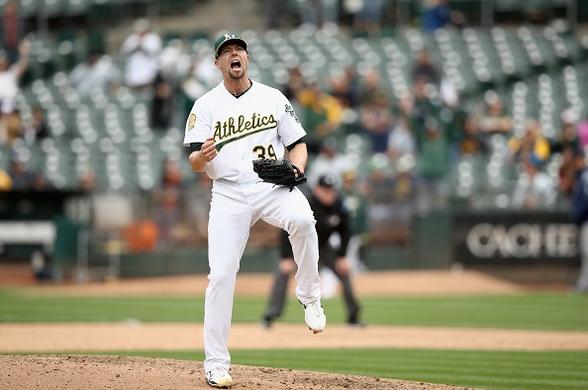 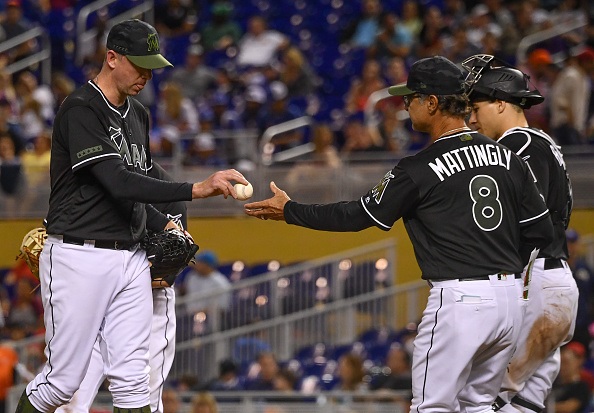 Brad Ziegler (29% owned) – Why? Why is this guy still the closer? Can anyone provide an answer to that question that actually makes sense? The answer is no. He seemingly gets bombarded every time he pitches and not only should he not be the Marlins closer anymore, he shouldn’t even be on the team. He pitched twice this week and gave up five runs (four earned) and blew a save, bringing his season ERA to a disgustingly ugly 7.83. To go along with all the runs he gives up, he also has by far the worst strikeout rate of any closer as his K/9 is 5.87 with 15 strikeouts across 23 innings. He also has a 0-5 record, there are no positives here. Meanwhile, setup man Kyle Barraclough ’s ERA is an outstanding 1.48 and he hasn’t given up a run in his last nine outings. Not only has he not given up a run in that span, he also has only given up ONE hit. The Marlins are trying to lose, that is the only way to explain this. Grab Barraclough if he is available. 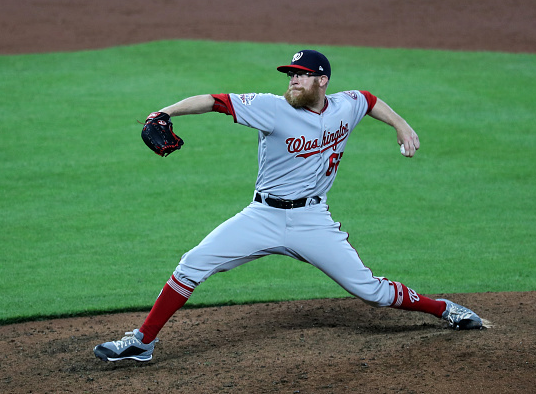 Sean Doolittle (92% owned) – Doolittle picked up four saves this week without giving up a run. He also struck out five, giving fantasy owners a great week in all areas. He has made five straight scoreless appearances and has racked up eight saves in the month. Eight saves not enough? He also picked up two wins this month for fantasy owners, helping bolster his owners across the board. Doolittle is 13-of-14 in save chances this year and his ERA is sitting at a crisp 1.78. That would be a career best mark for him if he is able to maintain it, as his current career low ERA is 2.73 back in 2014 in his lone all-star season. Health will remain a risk/concern for Doolittle, but if he stays on the field he will remain a high-end closer. Top-five. YTD stats: 25.1 innings, 13 saves, 38 Ks, 1.78 ERA.

Blake Treinen (83% owned) – I am a bit confused as to why his ownership is so low in comparison to other closers. This guy has been lights out since joining the A’s last year. This week he pitched three times and picked up two saves without allowing a run. He only allowed one runner to reach base against him and he struck out three. He has made six straight scoreless appearances. For the year, he has the second lowest ERA among all closers thus far, is in the top-10 in saves, and has a rock solid K/9 of 11.00. Top-ten. YTD stats: 27 innings, 12 saves, 33 Ks, 1.00 ERA.

Hunter Strickland (78% owned) – Strickland had a rough week despite picking up two saves. Fantasy owners will take the two saves and be pleased, but it came with poor surrounding stats. He had just one strikeout across 3.1 innings of work and he gave up a pair of runs. The two saves he recorded this week are his only two saves over the last two weeks. May has just not been kind to Strickland, as he has given up five earned runs in 10.1 innings pitched and has just four total saves for the month. He is still a fine closer to own and his job is not in immediate jeopardy, but he needs to start pitching better to keep it that way. Lower-tier. YTD stats: 24 innings, 11 saves, 23 Ks, 2.63 ERA.

This section will focus strictly on closers in waiting or closer capable guys and how they are performing. Each player of note will also include their stats from the 2017 season for the foreseeable future. *22 of Gsellman’s 25 appearances in 2017 were as a starter. 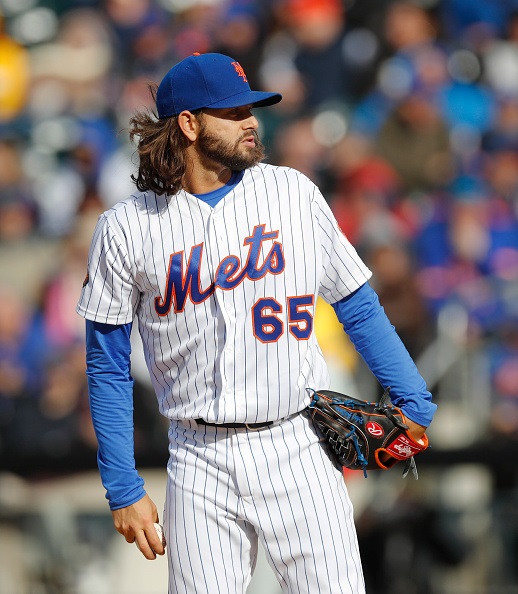 Robert Gsellman (11% owned) – Gsellman snagged his second save of the year yesterday as he pitched a three-up, three-down inning. What makes this so important is that regular closer Jeurys Familia pitched the eighth inning. Now this doesn’t mean Familia is no longer the closer, but it does mean things are getting interesting for the Mets. Familia was brought in to face the heart of the Braves order, which signals the club still views him as their top option in the ‘pen, but it could make things turn into more of a committee approach as the Mets try and close out ball games. Familia has blown a league-high four saves, but at the same time has put up very strong numbers in ERA, WHIP, and FIP. Gsellman as well as Seth Lugo could start to be in the mix for some save chances. Also, if the Mets look to sell at the trade deadline, Familia would be a name that would come up. Gsellman has been very solid this year but not dominant, making him only a deep league stash unless he gets the next save. YTD stats: 34.2 innings, 6 holds, 31 Ks, 3.38 ERA.

Kirby Yates (7% owned) – Yates is behind Brad Hand , so he won’t be seeing save chances anytime soon barring an injury, but he is pitching very well and would be the closer if something happened to Hand. He has a microscopic 0.95 ERA and a strong 11.37 K/9. He has given up just one run since April 25th and has at least one strikeout in 10 straight outings. He should be owned in leagues with holds, and with how well he is currently pitching he should be owned in non-holds leagues for his strong ratios and as a possible closer stash. He had pretty good year last year too, with 87 strikeouts in 55.2 innings, a 3.72 ERA, and a .206 BAA, so he is a guy that you can trust at this point. YTD stats: 19 innings, 8 holds, 24 Ks, 0.95 ERA.

This simply provides the current top-5 closers in saves, strikeouts, ERA, and WHIP.

J. Altuve - 2B
HOU1
Jose Altuve launched a solo homer to help the Astros to a win over the Diamondbacks on Tuesday.
Altuve got the Astros on the board with a solo shot off of a struggling Madison Bumgarner. That was the only hit of the day, but if you're only going to have one, why not make it a homer? Altuve has now homered twice in 2020, but his .163/.280/.326 line is a disappointment for anyone who selected him with an early pick in March or July.
Added 12:02 am (EST)
Added 12:02 am (EST)

C. Correa - SS
HOU1
Carlos Correa went 3-for-3 with a homer and two walks in a 8-2 victory over the Diamondbacks on Tuesday.
A five-reach game is always nice to see. Correa launched the second homer of the game -- and his second homer of this young campaign -- in the second inning off of an ineffective Madison Bumgarner. With the homer along with the two singles and two free passes, Correa sees his slash improve to .389/.488/.639 with six RBI. It's still technically early, but Correa appears locked in to begin this 2020 season.
Added 12:02 am (EST)
Added 12:02 am (EST)

M. Bumgarner - SP
ARI1
Madison Bumgarner gave up eight runs -- seven earned -- over 4 1/3 innings in a loss to the Astros on Tuesday.
Bumgarner gave up solo homers in each of the first two innings to Jose Altuve and Carlos Correa, respectively, but things really fell apart in the fifth inning. He gave up a six-spot in that frame before being pulled, and it turned a mediocre start into a wretched one. The long-time Giant had pitched decently in his first two starts with the D-Backs, but after this one , his ERA has jumped to 7.04 over 15 1/3 innings. We’ll see MadBum back on the mound on Sunday against the Padres.
Added 12:02 am (EST)
Added 12:02 am (EST)

C. Javier - SP
HOU1
Cristian Javier pitched well against the Diamondbacks, allowing just a run over six innings in a victory on Tuesday.
Javier scattered four hits, and he walked one with two strikeouts. It’s another impressive start for the rookie right-hander, and while he didn’t miss as many bats as the eight-strikeout performance he had against the Dodgers in the previous outing, he threw strikes and kept the Arizona hitters off-balance all evening. Keep in mind that Javier posted a 1.74 ERA in the minors last year -- the best of any qualified hurler -- so this isn’t coming out of nowhere. Maybe expect some regression because he doesn’t have elite stuff, but Javier can pitch.  He faces the Athletics on Sunday.
Added 12:01 am (EST)
Added 12:01 am (EST)

H. Kendrick - 2B
WSH1
Howie Kendrick went 4-for-4 and homered Tuesday in the Nationals' 5-3 win over the Mets.
Kendrick was likely the Nationals' hitter least bothered by the team's weeklong break. Not only was he dealing with some back tightness, but he's also used to going a few days without at-bats anyway. Kendrick was 2-for-16 in five games this season coming into this one, but at age 36, he's still a force to be reckoned with in the heart of the Nationals' order.
Added Yesterday 11:57 pm (EST)
Added Yesterday 11:57 pm (EST)