Justin Vreeland analyzes week 16 snap counts for position battles across the NFL, and breaks down what should be expected going forward. 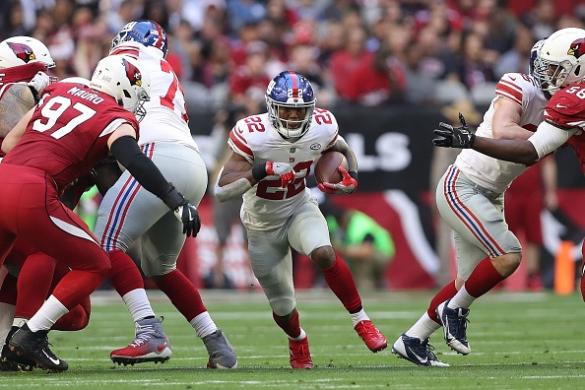 Tracking snap counts is a good way to get an indication of how much a player is on the field, and what their future usage outlook could look like. We are going to dive into some of the more interesting situations around the league regarding snap count numbers. You will also see risers and fallers; which is a useful tool for valuing a player’s fantasy stock. The notable snap counts section is based around injuries sustained in the previous week or suspensions.

The Redskins played their two running backs equally with Samaje Perine playing 34 snaps and Kapri Bibbs playing 35. The playing time was similar, but the touches were a different story. Perine finished with 17 carries for 53 yards and added in three receptions for 21 yards. He also lost a fumble. Bibbs finished with seven carries for 26 yards and added in two receptions for 28 yards. A similar usage can be expected in week 17 if both backs are healthy and active. Perine has really struggled this season, rushing to an average of just 3.5 yards per carry and only finding the end zone one time on the ground, despite 173 carries. The good news for Perine is that the Redskins still see him as their potential featured back moving forward. 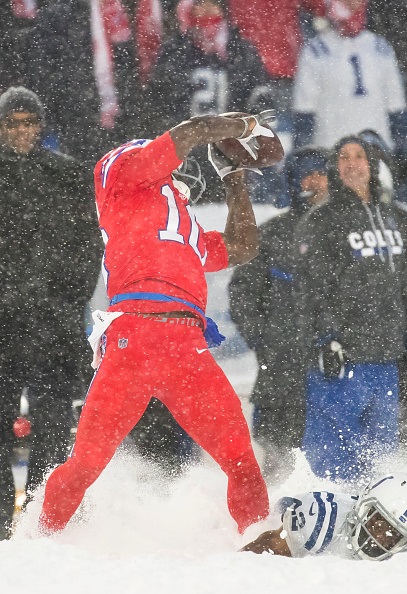 Deonte Thompson played a team high 61 snaps (an increase of 17 from the previous week). He was in for 90% of the Bills offensive snaps, outplaying both Zay Jones and Kelvin Benjamin. Thompson had a strong game, finishing with four receptions for 91 yards on just five targets. It was his third strong game as a member of the Bills and he has turned into a big part of the offense. The Bills run heavy approach on offense makes it hard to support receivers in fantasy, but Thompson makes for a solid GPP dart throw on a weekly basis given his cheap price and upside in DFS.

Wayne Gallman played a season high 52 snaps. Gallman has been splitting time with Orleans Darkwa, but this week Darkwa was in for just 12 snaps. Both backs struggled to get anything going on the ground as they combined for 16 carries for just 28 yards. However, Gallman played a prominent role in the Giants passing attack, as he finished with six receptions for 44 yards. With the Giants sitting on a 2-13 record, there is a strong chance that the team will choose to use their rookie running back heavily once again in week 17.

Brenton Bersin played a season high 51 snaps. Bersin had yet to break 17 snaps prior to week 16, but with a number of injuries suffered to the Panthers wide receiving core, Bersin was thrust into extended action. He finished with a season high in targets (4), receptions (3), and yards (45). Fellow receiver Damiere Byrd was placed on injured reserve on Tuesday, meaning Bersin should once again be a part of the Panthers offense in week 17 and in the playoffs. Despite the increased playing time, Bersin will be nothing more than a cheap punt play in DFS.

J.D. McKissic was in for just two snaps this week after back-to-back weeks of 30 snaps or more. McKissic has proven to be one of the most game flow dependent running backs in the NFL, only seeing action when the Seahawks are down big in football games. With the Seahawks leading the majority of the contest against the Cowboys this week, Mike Davis was in for nearly every snap of the Seahawk offense and finished with 19 touches compared to McKissic’s zero. 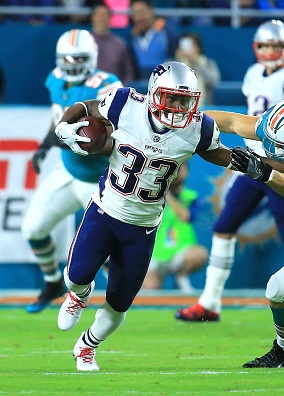 Rex Burkhead was out this week with injury. Dion Lewis played a season high 51 snaps and Mike Gillislee played 15 snaps (Gillislee was active for the first time since week eight). With Burkhead out the Patriots leaned heavily on Lewis. Lewis finished with a season high 24 rushing attempts and 129 yards. He also scored a touchdown on the ground. In the passing game, he finished with five receptions for 24 yards and another touchdown. Gillislee operated strictly in a backup role but did get a goal line carry that he was able to plunge in for a touchdown. He finished with six carries for 28 yards and the one touchdown; he also caught his first pass of the season, which he turned into a 15 yard gain. Expect more of the same usage rates in week 17 if Burkhead is once again forced to miss action.

Antonio Brown was out this week and the Steelers turned to multiple different receivers to attempt to fill the void. Martavis Bryant, Eli Rogers, Darius Hayward-Bay, and Justin Hunter all had slight increases in playing time. JuJu Smith-Shuster slid into the number one role and had the strongest game amongst the Steelers receivers, finishing with six receptions for 75 yards and a touchdown. Bryant was the only other receiver worth noting and he finished with three receptions for 60 yards. Rogers and Hunter each finished with one reception. With Brown being ruled out for week 17, Smith-Shuster and Bryant will both be worth playing.