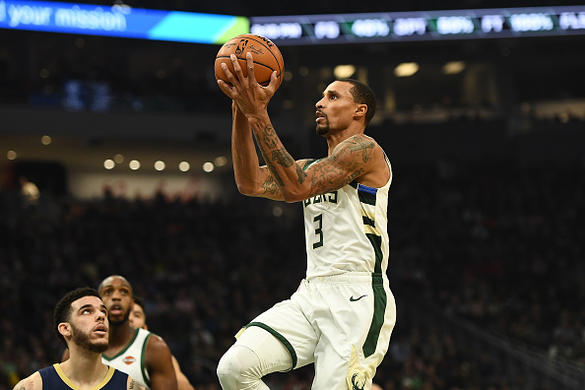 We have a nice slate today with some players ruled out which had helped create some solid value, so let’s jump into it.

George Hill , MIL PG - Eric Bledsoe has been ruled out tonight and there’s a chance Giannis will sit out as well. Hill already has been productive in his role off the bench and now he will be starting at under $4000. He’s going to be popular.

Derrick Jones , MIA SF - Another play under $4,000 on this slate who has been playing a ton of minutes for a depleted Heat team. Jones can be a bit volatile when scoring but we like his blocks/steals and rebounding upside that he has as well.

Paul George , LAC SF - George went for 40 actual last night and now plays a Chicago team without Kawhi Leonard . We are getting a huge bargain here and given all the other value opening up then he’s going to be rather chalky.

Jerami Grant , DEN PF - Revenge game narrative in play and if Millsap sits we get a bigger boost. Grant has been... 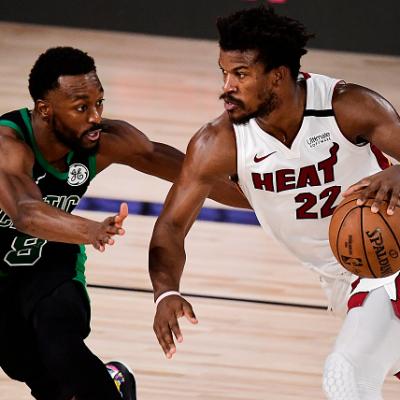 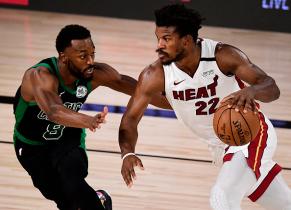 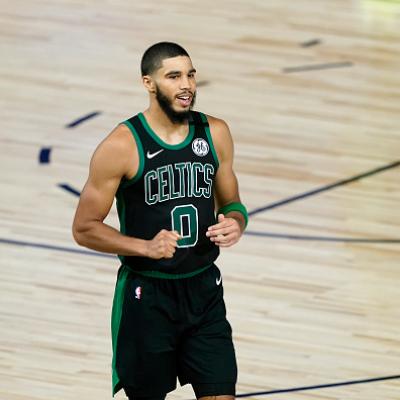 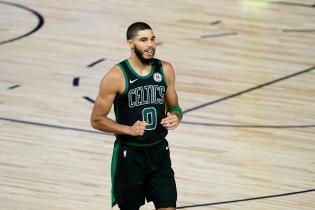 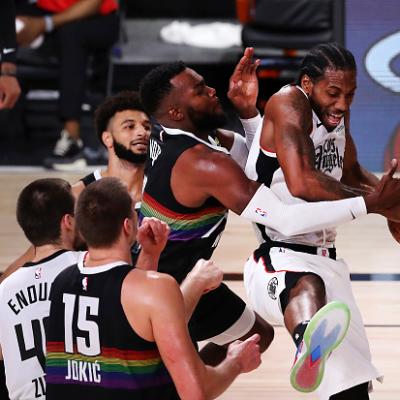 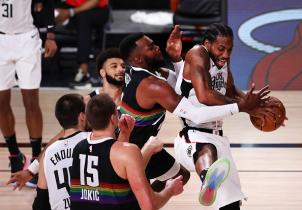 NBA Smart and Brown had confrontation after Game 2

G. Antetokounmpo - PF
MIL
Giannis Antetokounmpo won his second consecutive MVP Award according to ESPN's Adrian Wojnarowksi.
The MVP voting only took the regular season from before the bubble into account so Giannis was always the heavy favorite. Still only 25 years old, Giannis had a truly remarkable season, averaging career-highs in points (29.5), rebounds (13.6) and 3-pointers (1.4) with 5.6 assists, 1.0 steals and 1.0 blocks. He's the third player to win multiple MVP Awards before turning 26 years old, joining Kareem Abdul-Jabbar and LeBron James (h/t Justin Kubatko of Statmuse).The Bucks are hoping to re-tool their roster by adding more shooting in the backcourt, but we can also expect Giannis to spend his offseason working on his mid-range and perimeter shooting with so many teams collapsing the paint on Milwaukee in the playoffs. Whether or not he signs the super-max extension this fall is still up in the air.
Added 10:46 am (EST)
Added 10:46 am (EST)

M. Smart - SG
BOS
Marcus Smart and Jaylen Brown had a heated confrontation in the locker room after Thursday's Game 2 loss.
According to The Athletic's Shams Charania, Smart was addressing the team in the locker room about being accountable for their actions and that's when Jaylen "snapped back" and told Smart to settle down. That turned into a "tense interaction" in which objects were thrown around. Many reporters said the locker room scuffle was the loudest they have ever heard but luckily their teammates stepped in and diffused the situation. Smart and Brown have since smoothed tensions over but this is going to be fascinating to see how Boston responds in Game 3 after all this.
Added 10:38 am (EST)
Added 10:38 am (EST)

J. Brown - SG
BOS
Jaylen Brown hit 8-of-14 shots and two 3-pointers for 21 points, six rebounds and two assists in 39 minutes of Thursday's 106-101 Game 2 loss to the Heat to fall into a 2-0 hole in the ECF.
Jayson Tatum hit 6-of-12 shots and 9-of-11 free throws to also score 21, adding five rebounds, four assists, a steal and a block to his stat line in the loss. Brown had an open look at a 3-pointer that would have tied the game with 10.6 seconds left, but it didn't go down and the Heat never looked back. Brown did hit some huge shots down the stretch and came to life in the fourth quarter, but it was too little, too late.
Added Yesterday 10:02 pm (EST)
Added Yesterday 10:02 pm (EST)

K. Walker - PG
BOS
Kemba Walker hit 9-of-19 shots and 4-of-11 3-pointers for 23 points, seven rebounds, three assists, two steals and a block with five turnovers in 34 minutes of Thursday's 106-101 Game 2 loss to the Heat to fall into a 2-0 hole in the ECF.
Walker went off in the first half and then kind of disappeared after the break when the Heat implemented a zone, stopped Kemba and won the third quarter 37-17 to overcome a 17-point deficit and get the win. Walker wasn't very good in Game 1 (6-of-19 shooting) and looked a lot better tonight, but the Celtics couldn't get it done down the stretch. Walker is going to have to play at a high level the rest of the way if the Celtics are going to come back and win this series.
Added Yesterday 9:57 pm (EST)
Added Yesterday 9:57 pm (EST)

D. Robinson - SF
MIA
Duncan Robinson bounced back from a rough Game 1 to hit 6-of-12 3-pointers for 18 points, two rebounds, four assists and a block in 32 minutes in Thursday's Game 2 win.
The Heat were down by 17 at one point tonight, but won the third quarter 37-17 to get another tough win. Robinson played just 17 minutes for six points in Game 1 but was a different player tonight. Game 1 hero Tyler Herro played 32 minutes and hit 4-of-12 shots and 1-of-8 3-pointers for 11 points, nine rebounds, five assists and a steal tonight, but Robinson stepped up and got it done.
Added Yesterday 9:52 pm (EST)
Added Yesterday 9:52 pm (EST)

B. Adebayo - PF
MIA
Bam Adebayo hit 10-of-16 shots for 21 points, 10 rebounds, four assists, two steals and a block in 35 minutes of Thursday's 106-101 Game 2 win over the Celtics to give the Heat a 2-0 lead in the ECF.
Bam has been amazing this season and it's carried over into the playoffs. His block on Jayson Tatum in Game 1 was one for the ages and he came back again in Game 2 and balled out, scoring 15 points in the third quarter when the Heat outscored Boston 37-17. He should be in your DFS lineups until further notice, as the Celtics don't appear to have an answer for him.
Added Yesterday 9:49 pm (EST)
Added Yesterday 9:49 pm (EST)

G. Dragic - PG
MIA
Goran Dragic hit 10-of-19 shots and three 3-pointers for a team-high 25 points, three rebounds and five assists in Thursday's 106-101 win over the Celtics.
The Heat outscored the Celtics 37-17 in the third quarter after the Celtics were up by 10 for most of the game and they never really looked back. Dragic hit a monster 3-pointer and a tough two-point shot down the stretch to help the Heat seal the win. Dragic has been an unsung hero for most of these playoffs and brought his A Game tonight. And oh yeah, he's leading the Heat in scoring in the playoffs.
Added Yesterday 9:46 pm (EST)
Added Yesterday 9:46 pm (EST)

J. Butler - SF
MIA
Jimmy Butler hit 4-of-11 shots and 6-of-6 free throws for 14 points, four rebounds, three assists and four steals as the Heat made a second-half comeback to beat the Celtics 106-101 to take a 2-0 lead in their ECF series.
Butler missed his only 3-pointer and while his fantasy game was lacking tonight, he made some huge plays down the stretch, stealing the ball and feeding Jae Crowder for an easy layup and the final two free throws of the game to ice it. Fantasy-wise, Jimmy let his managers down tonight, but he deserves some credit for deferring to his teammates, playing hard and making huge plays when it mattered. The Heat truly play as a team and it could be a different guy stepping up offensively every night. Goran Dragic led the way with 25, Bam Adebayo had 21, Duncan Robinson bounced back for 18 points, Crowder added 12 points and three 3-pointers and Tyler Herro had 11 as the Heat put the Celtics in a serious hole on Thursday. The Heat are now an incredible 10-1 in these playoffs.
Added Yesterday 9:39 pm (EST)
Added Yesterday 9:39 pm (EST)