Jon Impemba highlights all of the top targets on the mound to stream for Week 21 of the MLB and fantasy baseball seasons! 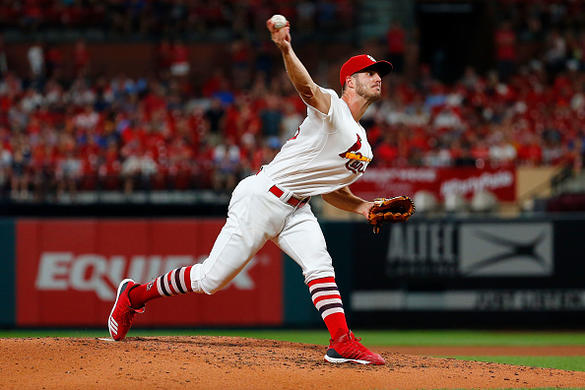 Ryan Yarbrough , SP TB –  Yarbrough has been outstanding since the All-Star break, going 4-0 with a 1.90 ERA while striking out 51 over 52 innings. His start this afternoon is coming against the Baltimore Orioles whom we just love to attack. He will finish up the week with a start against the Blue Jays who have also given him no trouble this season as he has allowed a total of five runs over 29.1 innings while striking out 25.

Dakota Hudson , SP STL – Hudson is coming off an impressive month of August which saw him go 4-1 with a 2.38 ERA over six starts. He will look to carry that success into September where his first start will come at home against the San Francisco Giants. Hudson has a 3.14 ERA this season in St. Louis and he picked up the win against the Giants in his lone start against them earlier this season.

Sean Manaea , SP OAK – The ownership numbers are very low as Manaea just returned from the IL to face the Yankees on Sunday...

MLB Nick Anderson gets first save for Rays on Tuesday

H. Kendrick - 2B
WSH1
Howie Kendrick went 4-for-4 and homered Tuesday in the Nationals' 5-3 win over the Mets.
Kendrick was likely the Nationals' hitter least bothered by the team's weeklong break. Not only was he dealing with some back tightness, but he's also used to going a few days without at-bats anyway. Kendrick was 2-for-16 in five games this season coming into this one, but at age 36, he's still a force to be reckoned with in the heart of the Nationals' order.
Added Yesterday 11:57 pm (EST)
Added Yesterday 11:57 pm (EST)

S. Matz - SP
NYM1
Steven Matz lasted just three innings and gave up five runs Tuesday in a loss to the Nationals.
Matz was going to competing for a spot in the Mets' rotation if things had gone as hoped this spring, but with Noah Syndergaard and Marcus Stroman down, there's probably no sending him to the pen now. At least he was good his first time out against the Braves. Unfortunately, he's now given up five homers in 14 1/3 innings and the Mets are 0-3 in his starts.
Added Yesterday 11:53 pm (EST)
Added Yesterday 11:53 pm (EST)

E. Díaz - RP
NYM
With the Mets down by two runs, Edwin Diaz struck out two in a perfect inning Tuesday against the Nationals.
Diaz got a soft groundout from Josh Harrison before striking out Carter Kieboom and Yan Gomes. That's not exactly the heart of the Nationals' order and it wasn't a pressure situation. Still, Diaz has pitched well in his last two appearances, which could help his chances of earning a save opportunity in the near future.
Added Yesterday 11:51 pm (EST)
Added Yesterday 11:51 pm (EST)

L. Hendriks - RP
OAK1
Liam Hendriks was able to pick up a win by pitching a scoreless top of the ninth on Tuesday against the Rangers.

M. Chapman - 3B
OAK
Matt Chapman tied the game in the seventh against the Rangers on Tuesday with a solo homer.

S. Piscotty - RF
OAK
Stephen Piscotty hit a walk-off grand slam on Tuesday to give the Athletics a 5-1 win over the Rangers on Tuesday.

J. Luzardo - SP
OAK1
Jesus Luzardo fired five scoreless innings but didn’t qualify for a decision on Tuesday in his start against the Rangers.
This was Luzardo’s first career start, and to the surprise of absolutely no one, it was an unqualified success. The 22-year-old walked two and allowed just two hits, and struck out five. Unfortunately for Luzardo and anyone who started him on Tuesday, the A’s give him zero run support. Literally. Still, a very impressive effort, and a wonderful reminder that Luzardo has the stuff to be an upper-echelon fantasy hurler as long as he can stay healthy. He’s back on the mound on Sunday against the Astros.
Added Yesterday 11:47 pm (EST)
Added Yesterday 11:47 pm (EST)