James Grande breaks down what we should look for in tonight's National League Wild Card game from a DFS perspective. 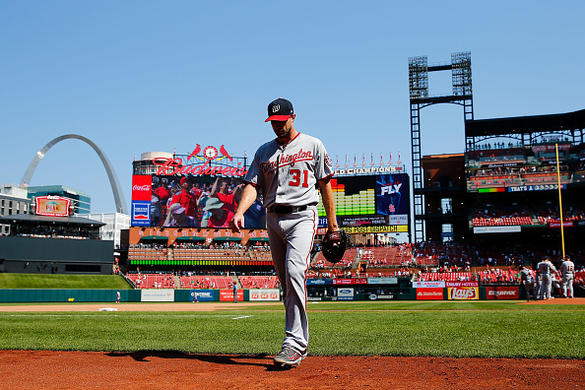 It’s playoff baseball time! We have one game tonight to decide who gets to square up with the Los Angeles Dodgers in the NL Division Series. The Nats come into this game steamy hot, winning eight straight games and nine of their last 10. The Brewers are 7-3 over the last 10 games in their own right, but lost the last three games of the year. The Brewers finished the season 13-5 over the last 18 contests. Why is that significant? That’s the teams record AFTER Christian Yelich ’s season-ending injury.

Both the Nationals and Brewers season are being put in the hands of their ace’s, Max Scherzer and Brandon Woodruff . Since Scherzer returned from the IL, he hasn’t been the same guy we saw prior to his injury, pitching to a 4.74 ERA across eight starts. He gave up four bombs over his last two starts but also had 10-plus K’s in each of those games, so we’re getting the good with the bad.

Scherzer squared off with Milwaukee once this year and picked up a win as he went six innings allowing one earned while striking out 10 opponents. Since September 10th -- when Christian Yelich went down -- the Brewers posted the 17th best OPS in the league. They also struck out a LOT over that span, notching a 27-percent K-rate, which was the fourth highest mark in the league. That, to me, is advantage Scherzer, despite his recent struggles.

This is going to be a tough one for Woodruff considering how good the Nationals offense has been recently. Over the past month, they rank in the top seven in OPS, wOBA and wRC+. Here’s the thing, Woodruff has thrown four innings across two outings since July 21st. We’re going to see a lot of the Brewers bullpen in this one and we already highlighted that slightly below league average.

If you’re playing anyone against Scherzer, it’s a left-handed batter. Lefties have a respectable .446 SLG, 1.32 HR/9 & a 38.9-percent hard hit rate. Eric Thames , Yasmani Grandal , Mike Moustakas and Trent Grisham are the Brewers primary lefties. Thames comes into this one the hottest of the group, homering four times over his last 10 games and six times in September overall. Grisham, Grandal and Moustakas are all hitting below .200 over their last 10 games.

Four right-handers worth mentioning for Milwaukee is Lorenzo Cain , Keston Hiura , Ryan Braun and Orlando Arcia . Braun had a big second half compared to his first half slashing .307/.377/.587. With a righty on the mound, Braun also has the ability to swipe a bag as we saw him steal 11 this season. Hiura hit .313 in September and Orlando Arcia is cheap as hell and hit .364 over the last seven days of the year and .302 over the last two weeks. Cain is dealing with a sprained ankle, but he’s on the roster and is expected to be ready. He’s crushing baseballs as he hit .429 over his last 10 games.

Left-handed hitters have also gotten to Woodruff a bit. The Nationals could potentially deploy five lefties tonight, but knowing that the Brewers bullpen will be called upon early, it may not be the best strategy. Juan Soto is 3-for-35 over his last 12 games and has fallen off a cliff, yet still notched a .949 OPS with 34 bombs and 110 RBI on the year. That’s the type of upside he brings. The other lefties include Adam Eaton who is a dual-threat hitting near the top of the order, Asdrúbal Cabrera who revitalized his season once he arrived in WAS, hitting .323 with a .969 OPS across 38 games, Matt Adams who has four career postseason home runs and Gerrardo Parra who comes in hot, but likely won’t be anything more than a pinch-hitter.

The Nats bread and butter is on the other side of the plate in Anthony Rendon and Trea Turner . Rendon’s 126 RBI this year lead major league baseball. He comes into this contest ice cold, batting .100 over his final 10 games, but I’m not too worried about him considering he hit .319 over 146 contests this season. Turner, unlike Rendon, is white hot coming into the postseason. His season really turned the corner after the All-Star break as he slashed .304/.360/.502 with 12 HR and 18 SB while scoring 60 R. If he gets on look for him to make Yasmani Grandal throw him out on the basepaths.

A few other names we should consider on Washington is Howie Kendrick who’s been such a consistent player for them this year. Kendrick hit .344 across 121 games this year and finished his season batting .433 over his last 10 games. It seems like Yan Gomes is going to be the catcher in this one, and he’s better than Kurt Suzuki defensively, and he was swinging a hot stick coming into the postseason batting .306 over his last 10 games of the year. Seven of his 11 hits over that span were for extra-bases. Victor Robles would be the last player I’d consider and mainly because of his speed. This is another guy who can run on Washington. He stole 28 bags in the regular season, so he isn’t shy once he reaches first.

We aren’t going to put together lineup’s for tonight’s showdown slate, but here are my top suggestions for the Captain’s Chair: