James Grande breaks down Tuesday's Wild Card matchup between the Rockies and Cubs to give you his take on what to watch for in this MLB contest on WinView Games. 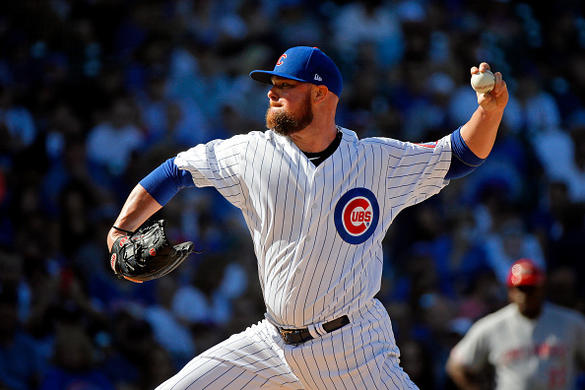 NO. Everything in this one feels like a pitchers dual. Both pitchers have faced today’s opponent and both picked up a win and looked really good in doing so. Also, we only have a seven run implied total, so I don’t expect there to be a lot of offense in this one.

YES. With the amount of playoff experience Jon Lester has, it wouldn’t surprise me in the slightest bit to see him come out and shut the door right away.

NO. Because I answered YES in question two, this is kind of contingent on the answer to that one. I expect a quick, efficient inning for the veteran southpaw and a young, anxious Rockies team could be up there hacking.

NO. Charlie Blackmon is really, really good, and he even hits lefties well, but I’m going all in with Lester here and going with the answer to question two as I expect him to have a 1-2-3 inning.

C. Yelich - RF
MIL
Yelich (kneecap) said Sunday his knee is fully recovered and he'll enter spring training with no restrictions, Todd Rosiak of the Milwaukee Journal Sentinel reports.
Yelich sustained the fractured right kneecap Sept. 10 and was given an 8-to-10 week recovery timeline, though he apparently didn't feel fully healthy until about a month ago since the team slow-played his rehab. The 28-year-old finished second in voting for National League MVP behind Cody Bellinger after posting a .329/.429/.671 slash line with 44 home runs, 30 stolen bases and 97 RBI in 130 games, and he's primed for another year as one of baseball's top players. Yelich should begin 2020 starting in right field for the Brewers, though the free-agent signing of Avisail Garcia and the additional roster shakeup could result in more time in left field.
Added Yesterday 12:30 pm (EST)
Added Yesterday 12:30 pm (EST)

D. May - SP
LA
May will enter spring training as a starter, Ken Gurnick of MLB.com reports.
For a full breakdown and detailed player analysis GO PRO and join the Fantasy Alarm Family! CLICK HERE to unlock your PRO package and take advantage of instant savings!
Added Jan 25 3:55 pm (EST)