James Grande takes a look at the MLB match-ups and picks a few spots where you may want to stack hitters in today's early DFS contests. 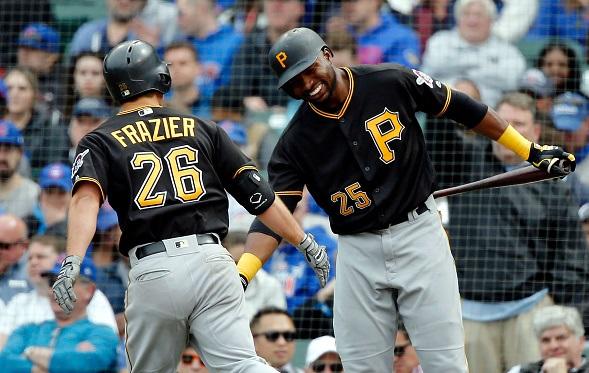 The thing is, the Twins starter hasn’t really been all that bad this year, but this is all about how good the Yankees offense has been of late. They’ve scored 42 runs over their last five games including 12 home runs. Gibson has, however, been susceptible to right-handed bats this year. Nine of the 10 earned runs he’s allowed have come against right-handers. Just last year he allowed a .352 wOBA to lefties and a .358 to righties, so everyone hit him equally hard last year no matter the handedness.

If you haven’t heard, the Yankees have some powerful right-handed hitters in their lineup. Their names? Aaron Judge , Giancarlo Stanton and Gary Sánchez . You can even sprinkle in some Tyler Austin in the mix as he hit his fifth home run of the year on Wednesday, raising his slugging percentage to .661. Hey, why not include Miguel Andujar into the mix as well. Andujar has nine doubles, three home runs and a triple over his last nine games. Think about that for a second.Judge has a 1.126 OPS on the year and has reached safely in every game during the month of April. Giancarlo Stanton has been a little better as well, hitting .261 over the last seven days including two bombs.

We can’t forget about the lefties, however, as Aaron Hicks and Didi Gregorius are both viable options, even Brett Gardner if he leads off. Gregorius homered for the fourth straight game and extended his hit streak to nine games on Wednesday and it’s not even fair how good he’s been of late. Really since the season began. Hicks has primarily done all his damage against right-handed pitching this year. He’s slashed .296/.472/.519 with all of his homers and all but one RBI coming against them.

With the Yankees opening up as a -190 favorites, and their offense clicking on all cylinders, the Twins could go overlooked in this spot. Montgomery has had a small sample against left-handers as opposing managers have elected to stack righty bats against him, but he’s been average against RHH. His .276 BAA and .331 wOBA are numbers we can in fact exploit. Righties had their fun against the Yankees southpaw last year hitting 16 bombs out of the 21 he gave up on the entire season.

Brian Dozier and Miguel Sano were two of the best hitters against left-handed pitching in the league last year. Dozier finished 16th in OPS while Sano finished 26th. Sano went deep on Wednesday which could get him going as he’s been mired in a bigtime slump since the season began. Eduardo Escobar is another interesting name that we could include in this stack. He’s only 3.4K, hitting relatively close to the middle of the lineup and will likely fly under the radar. On the year he’s hitting southpaws at a .308 clip. Max Kepler and Ehire Adrianza have been two other pieces hitting lefty pitching well. Adrianza leads the club in batting average at .364 while Kepler’s driven in the most runs (10) against them. Both guys are viable as secondary options.

Over his last three starts, Fulmer has allowed at least nine base runners in each contest. He’s also allowed three homers and eight earned runs over his last two games pitched, while striking out just six. The Pirates are the fourth best team in baseball against right-handed pitching in terms of striking out and Fulmer is someone who doesn’t miss bats often, so the correlation is there for Pittsburgh.

Fulmer has been especially bad against lefties this year allowing a .327/.364/.615 slash and all three homers have come against LHH as well. Corey Dickerson and Grégory Polanco are both pretty damn good left-handed bats in the Pirates lineup. Dickerson has dropped all the way down to 3.6K and has driven in all 12 of his runs against righty pitching. Polanco leads the Pirates in homers and is heating up a tad notching hits in three of his last four games. Josh Bell had an .813 OPS versus RHP last year and even though I mentioned lefties were the ones with success off of him, his stuff isn’t as good as it was during his rookie year a couple of season’s back.

Adam Frazier and Colin Moran are two other lefties in the Pirates lineup that you can get exposure to here. Frazier has been splitting leadoff duties with Sean Rodríguez we obviously need to pay attention to the starting lineup, because if Frazier isn’t leading off, my interest drops off. DraftKings is just handing Moran away for free on this slate at 2.9K and is basically asking us to pair the Pirates with the Yankees in this spot, because the Pittsburgh pricing allows us too.

G. Springer - CF
HOU
George Springer will be absent from Tuesday's workout while waiting for COVID-19 test results, per Brian McTaggart of MLB.com.
It's unclear if any other players are being impacted. The Astros have already had their fair share of testing delays in camp, so hopefully this is worked out before the season begins. These sort of delays can't happen or a season isn't sustainable.
Added 2:23 pm (EST)
Added 2:23 pm (EST)

P. Báez - RP
LA
Dodgers activated RHP Pedro Baez from the 10-day injured list.
Baez wasn't present early on in Dodgers' camp and the team didn't offer an explanation. However, he's apparently feeling good now and still has enough time to get ramped up for the season. Baez projects to serve in a set-up role after posting a 3.10 ERA and 69/23 K/BB ratio over 69 1/3 innings in 2019.
Added 2:16 pm (EST)
Added 2:16 pm (EST)

M. Tanaka - SP
NYY
Masahiro Tanaka said Tuesday that he hasn't had any concussion symptoms since leaving the hospital.
Great news, as it was easy to think the worst when Tanaka was hit in the head by a liner off the bat of Giancarlo Stanton last weekend. Everything is going well with his recovery, but it's too soon to say when he'll get back on the mound. As of now, Tanaka isn't sure whether he'll be able to make a start the first time through the rotation this season.
Added 2:12 pm (EST)
Added 2:12 pm (EST)

G. Crochet - SP
CWS
The White Sox have added first-round pick LHP Garrett Crochet to their 60-man player pool.
Crochet was included in an announcement for the team's 16-player satellite site roster which work out at Boomers Stadium in Schaumburg, Illinois. Others include RHPs Zack Burdi, Ryan Burr, Matt Foster, Brady Lail, Alex McRae, Bryan Mitchell and Jonathan Stiever, LHPs Bernardo Flores Jr., Jacob Lindgren, Adalberto Mejía, and Bennett Sousa, catcher Seby Zavala, and outfielders Micker Adolfo, Luis González, Blake Rutherford. Many of these players could help at the major league level this year, though Crochet's inclusion is probably mostly about helping his development and getting him familiar with the organization and coaches. He might not be far off, though.
Added 12:40 pm (EST)
Added 12:40 pm (EST)

J. Siri - CF
SF
The Giants have added outfielder Jose Siri to their 60-man player pool.
Siri was claimed off waivers from the Mariners back in March and currently occupies a spot on the 40-man roster. The 24-year-old has shown some power/speed ability in the minors, but he's had major issues making contact.
Added 12:29 pm (EST)
Added 12:29 pm (EST)

M. Smith - CF
SEA1
Mallex Smith is unlikely to play until the weekend.
Smith just arrived at Mariners' summer camp on Monday after being absent for an unspecified reason. He's going to be eased into things, but the team is still hopeful he'll be ready for the season. Smith led the majors with 47 steals last season and remains one of the most bankable fantasy players in that area. Dylan Moore and Joe Hudson also arrived in M's camp on Monday and will likely follow a similar timeline as Smith as far as game action.
Added 12:25 pm (EST)
Added 12:25 pm (EST)

T. Demeritte - RF
DET
Travis Demeritte (groin) took batting practice on Tuesday.
Demeritte missed the past four intrasqaud games with groin soreness, but he's moving in the right direction. The 25-year-old struggled after coming over from the Braves last season, but he could find a role in the Tigers' outfield this year.
Added 12:21 pm (EST)
Added 12:21 pm (EST)

T. Glasnow - SP
TB
Tyler Glasnow threw 49 pitches over 3 1/3 innings in a simulated game Tuesday.
Glasnow made his first appearance in Rays' camp on Tuesday morning and quickly got to work. He threw 28 out of his 49 pitches for strikes and struck out four. Glasnow confirmed Tuesday that he tested positive for COVID-19 at intake testing and dealt with a loss of taste and minimal cold symptoms, but he's better now and feels like he'll definitely be ready for the season. It looks like he might not be far off from a normal workload either. The upside is off the charts when healthy, so draft him with confidence in fantasy leagues.
Added 10:01 am (EST)
Added 10:01 am (EST)