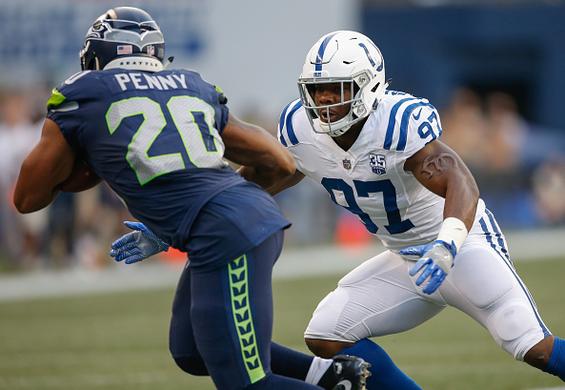 Week 13 demonstrated that poor play can quickly cause your fantasy running back to be benched.With Week 14 typically marking the start of your fantasy football playoffs, you don’t want to risk placing a player in your starting lineup who might not play an entire game.

Fantasy players who started Jonathan Williams in Week 13 might have wondered where he disappeared to in the second half of the Colts’ matchup against the Titans. According to Colts head coach Frank Reich, the fact that Williams didn’t get a second half carry in the game was an in-game decision based on his poor performance  (14 yards on 8 carries) and his holding penalty towards the end of the first half that eliminated a first-down completion. Williams was coming off two straight games in which he had rushed for at least 100 yards. Jordan Wilkins led Colts RBs with 13 touches in Week 13. Marlon Mack who has missed the last two games due to a broken hand is practicing this week and may make his return in Week 14. Based on all the uncertainty surrounding this backfield if you have better options, you might want to use them.

Bucs RB Ronald Jones was also benched due to poor play in Week 13. According to Bucs head coach Bruce Arians, Jones failed to pick up the blitz “and that’s it. You don’t get to play no more.” Jones didn’t see the field after the first quarter in Week 13, but Peyton Barber , who filled in for him, only rushed for 44 yards on 17 carries. That translates to 2.59 yards per carry. Arians has said that Jones is still his starter but if he plays poorly, will we see him on the field at the end of Week 14’s game?

There are a few question marks surrounding the Chiefs backfield for Week 14. Damien Williams missed last week’s matchup due to a rib injury and Darrel Williams is dealing with a hamstring injury which might force him to miss Week 14. It’s looking like LeSean McCoy and preseason darling Darwin Thompson might be splitting carries this week. Things have gotten so bad that the Chiefs have re-signed Spencer Ware .

Last week we discussed how Chris Carson ’s fumbling issues might affect his and Rashaad Penny ’s playing time. Carson played 52% and Penny played 47% of the Seahawks’ offensive snaps in Week 13. Carson still out carried Penny by a 23 to 15 margin, but Penny scored a TD in his second straight game. It appears that at least for now, Carson is still the main guy in the Seahawks’ backfield, but Penny seems to be carving out a recurring and increasing role in their offense.

Titans RB Derrick Henry is a freak of nature. While many RBs usually start to tire and falter by the end of the season, he just gets better and better. He is averaging 165 rushing yards per game over the last three weeks and he has scored a TD in four straight games. It doesn’t seem to be a fluke. Last season Henry averaged 146 rushing yards per game over the last four weeks of the regular season.

T. Brady - QB
TB1
Tom Brady has an adjusted completion rate of 68.6 percent over his three 2021 postseason games.
That marks a 6.5-point drop from his regular season adjusted completion rate, which accounts for throw aways, drops, spiked balls, batted passes, and passes where the quarterback was hit while he threw the ball, per Pro Football Focus. Only Russell Wilson -- who only played one playoff game -- has a lower adjusted completion rate this postseason. Brady and the Bucs made it out of Green Bay with a Super Bowl berth despite his three interceptions to go along with three touchdown tosses against one of the league's top secondaries. Brady hasn't gotten much help from his pass catchers, who have recorded a dozen drops in three postseason contests (the adjusted completion rate accounts for drops). The 43 year old's accuracy issues could pose problems for the Bucs offense in the Super Bowl against a Kansas City secondary that allowed the league's fourth lowest completion rate in 2020.
Added 11:12 am (EST)
Added 11:12 am (EST)

M. Brown - WR
BAL1
Ravens general manager Eric DeCosta said he was happy with how the team's wideouts played in 2020.
In a wide-ranging interview with reporters Monday morning, DeCosta said he's not singularly focused on bolstering the receiver position this offseason. “We have a running attack that’s the best in football and probably the best in the history of football," DeCosta said when asked about adding pieces to a Baltimore passing offense that struggled throughout 2020. DeCosta said he was "very happy" with rookie wideouts Devin Duvernay and James Proche, and called Marquise Brown a "legitimate playmaker." "Everybody is going to talk about WRs a lot this offseason, but it doesn't sound like [DeCosta] envisions some silver bullet 'fix' there," Ryan Mink, the team's editorial director, said on Twitter. The Ravens would figure to be in the running to sign free agent wideouts like Kenny Golladay, Chris Godwin, and Allen Robinson, but it sounds like DeCosta isn't committed to pouring resources into the team's passing attack. Any free agent receiver addition would be an iffy bet for fantasy purposes in the Ravens' low-volume passing offense.
Added 10:37 am (EST)
Added 10:37 am (EST)

L. Jackson - QB
BAL1
Ravens general manager Eric DeCosta said the team could sign Lamar Jackson to a contract extension this offseason.
This should (temporarily) quiet the L-Jax skeptics who have been critical of his passing acumen in recent months after his completion rate dipped and his otherworldly 2019 adjusted yards per attempt of 8.9 fell to 7.6 in 2020. The team is 34-12 in Jackson's starts over the past three seasons on the strength of an efficient offense predicated on dominating opponents on the ground. It's crystal clear that the Ravens are committed to Jackson, who, at 24, might already be the best dual threat quarterback in league history. He has 2,906 rushing yards over his 46 NFL games, or 63.17 yards per contest. The team will need to improve their wide receiver group and make the offense far less predictable in 2021 if Jackson is going to make the leap as a passer. He would become an unrestricted free agent in 2023 if the Ravens can't come to terms on a long-term deal.
Added 10:12 am (EST)
Added 10:12 am (EST)

I. McKenzie - WR
BUF
Isaiah McKenzie caught his lone target for a six-yard touchdown in the Bills' AFC Championship loss to the Chiefs.
The Bills' fifth wideout, McKenzie was in on a quarter of the offensive snaps this season after re-signing on a one-year deal. He ended the year with career highs in catches (30), yards (282), and touchdowns (5) on 34 targets as a high-percentage option out of the slot and near the line of scrimmage. McKenzie will be 26 this offseason and could be brought back for his sure hands and reliability.
Added Yesterday 11:11 pm (EST)
Added Yesterday 11:11 pm (EST)

G. Davis - WR
BUF1
Gabriel Davis failed to catch any of his three targets in the Bills' AFC Championship loss to the Chiefs.
It was a rough finish to what was a flashy rookie season for the fourth-rounder. Davis played 73% of the Bills' snaps and was a regular in three- and four-wide sets with John Brown in and out of the lineup most of the season. Davis appeared in all 16 games and went 35-599-7 on 62 targets, averaging a robust 17.1 yards per catch as a big-play specialist and red-zone threat. Davis is a legit NFL wideout and could be in line for a bigger 2021 role if the Bills decide to move on from Brown in the final year of his contract. Davis' arrow is screaming upward in an aggressive passing offense.
Added Yesterday 11:07 pm (EST)
Added Yesterday 11:07 pm (EST)

D. Knox - TE
BUF1
Dawson Knox caught 6-of-8 targets for 42 yards and one touchdown in the Bills' AFC Championship loss to the Chiefs.
The targets tied a season high for Knox while the six grabs were his most of the year. Knox's sophomore campaign was pretty similar to his rookie one, producing a 24-288-3 line on 44 targets after turning 50 looks into 28-388-2 last season. Knox has a ton of athleticism and a nose for the end zone with two playoff scores, but he's unlikely to be drafted inside the top 12 tight ends in 2021 fantasy leagues. Still, there's hope for a third-year leap in an aggressive Buffalo offense. Knox will likely be hyped as a late-round sleeper at the position.
Added Yesterday 11:03 pm (EST)
Added Yesterday 11:03 pm (EST)

M. Hardman - WR
KC1
Mecole Hardman caught 2-of-3 targets for four yards and one touchdown in the Chiefs' AFC Championship win over the Bills, adding 50 rushing yards on one attempt.
Hardman's night started off in the worst way possible, muffing a first-quarter punt inside his own five-yard line that the Bills recovered and then scored a three-yard touchdown a couple plays later. Hardman made up for it, however, with a three-yard touchdown catch on a screen to the left. With Sammy Watkins hurt and inactive, Hardman and Byron Pringle combined for eight targets as deep third or fourth options.
Added Yesterday 11:00 pm (EST)
Added Yesterday 11:00 pm (EST)

J. Brown - WR
BUF1
John Brown caught 2-of-3 targets for 24 yards in the Bills' AFC Championship loss to the Chiefs.
Brown combined for 10-152-2 across Weeks 1-2 to open the season, but then the injuries started piling up and ruined Brown's year for the most part. He scored just one more touchdown the rest of the way and finished with a 33-458-3 line in nine games. Injuries have always been Brown's downfall, and he turns 31 this offseason. With just one year left on his deal and Gabriel Davis looking for an expanded role after a flashy rookie year, Brown could be cut. The Bills would save over $8 million against the cap by releasing Brown this offseason.
Added Yesterday 10:55 pm (EST)
Added Yesterday 10:55 pm (EST)