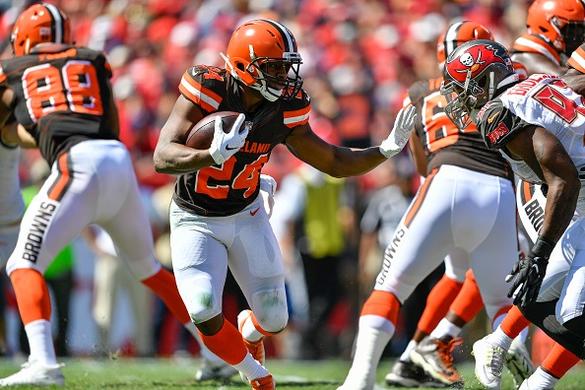 David Johnson has sad that he is “definitely playing” in Week 10. The question remains how much does he play? Chase Edmonds is expected to be sidelined again this week, but with Kenyan Drake looking phenomenal in his Cardinals debut, the Cards could afford to ease Johnson back into the mix. While we’ll probably have to wait and see how the Cardinals split up the playing time amongst their backs, it would make sense for Drake to retain a significant role in the offense until the Cards are certain that Johnson is 100 percent healthy. The Seahawks were able to run the ball against the Bucs last week, but Tampa Bay has given up just over 78 rushing yards per game on the season. Look for Drake to take most of the carries with David Johnson putting his talents as a pass catcher to good use. In his last three full games, Johnson was averaging just over 77 receiving yards per game.

It seems official! Devin Singletary has developed into the Bills’ primary RB. He played 68% of the Bills’ offensive snaps in Week 8 and 66% in Week 9. Singletary had 20 carries in Week 9 compared to Gore’s 11 and the rookies is starting to become a factor in the Bills’ passing game with seven catches over the past two weeks.

Just like with the Cardinals’ RB situation, we’ll probably have to wait and see how the addition of Kareem Hunt to the Browns’ active roster is going to affect Nick Chubb ’s playing time in Week 10 against the Bills. Hunt has been practicing with his teammates for the past two weeks, but while it seems obvious, nothing prepares you for game action like taking real hits in a game. Look for Hunt’s playing time to increase gradually on a week to week basis. Chubb has played well enough for him to keep his starting job, but the Browns have lost four straight games and they might be looking to shake things up a bit. That being said, Hunt will probably start his season in a change of pace role and as he gets into game shape, if the Browns are smart, they’ll look for unique ways to incorporate him into their offense. Hunt isn’t exactly an ideal start this week, but with six teams on a bye, if you’re faced with taking a zero at one of your RB or flex spots, use him. The Bills have a shut down pass defense, but they’re giving up 4.5 YPC and an average of 112 rushing yards per game.

Last week we talked about how the Dolphins’ trade of Kenyan Drake would set Mark Walton free and put him in position to be Miami’s primary RB. Walton had played 87% of Miami’s offensive snaps in Week 8 and 74% of their offensive snaps in Week 9 but alas, he was hit with a four game suspension for violating the NFL’s personal conduct policy. While many of us automatically turned our attention to Kalen Ballage and his season long 2.0 YPC upon hearing the news, perhaps this might be rookie RB Myles Gaskins’ time to show us what he can do. Let’s face it, it’ll take a while before we really fall in love with any Dolphins RB when it comes to fantasy. However, with Ballage playing putrid football this season, Miami should give their rookie back the opportunity to try to prove that he can be looked upon as a potential RB of the future.

If you own shares of the Steelers backfield you’ve got your work cut out for you this week. You need to keep your eyes glued to the team practice and injury reports leading up to game time. Benny Snell, who didn’t play last week, missed a mid-week practice. James Conner , who also didn’t play in Week 9, has been limited in practice this week. Trey Edmunds , who had 12 carries and a 6.08 YPC average in Week 9, has been dealing with a rib injury this week. About the only Steelers back who is not dealing with an injury, at least for now, is Jaylen Samuels . Samuels made fantasy managers who started him in PPR leagues very happy with his 13 catch performance in Week 9. Watch the Steelers RB situation very carefully as game time approaches.

BEST DEAL EVER FOR CYBER MONDAY! DOMINATE the competition! WIN with the #FAmily! Get LeagueSync, Lineup Generator for DraftKings & FanDuel, Award-Winning DFS Playbook, Robust Tools & more. No New Payments Until 2022! Click Here to GET STARTED! 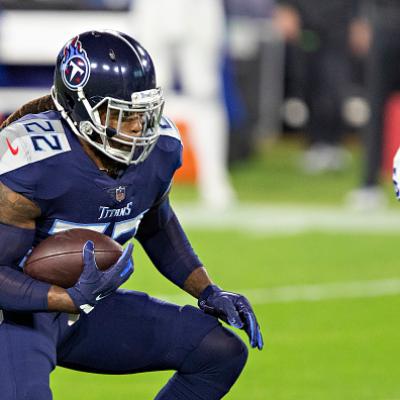 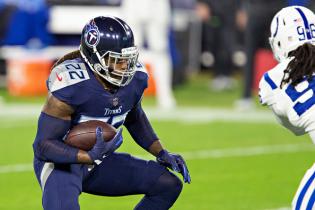 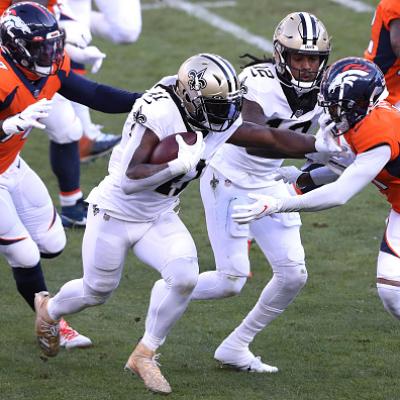 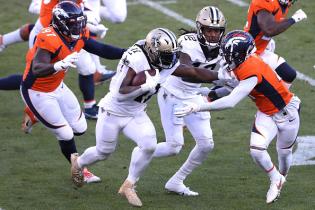 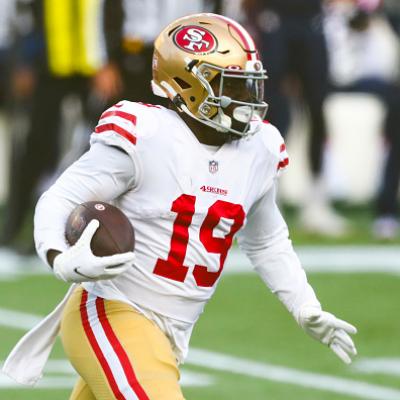 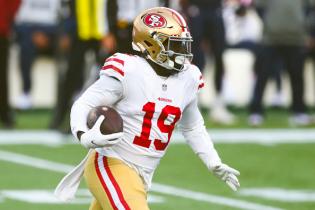 NFL Nagy on Mitch starting again: I don't see why not

NFL Jacobs' ankle injury 'looked worse than it is'

NFL Ekeler leads all RBs in pass routes in Week 12

D. Jones - QB
NYG1
ESPN's Jordan Raanan reports Daniel Jones (hamstring) is expected to miss "some time."
There are conflicting reports on the exact amount of time (if any) Jones will miss following his hamstring strain from Sunday, but all tea leaves seemingly point to him sitting out Week 13 against the Seahawks and eyeing a realistic return for the beginning of back-to-back home games the following week. How quickly he can heal (and rehab on the field) will ultimately determine how many games he'll miss. Wednesday's practice report and updates will be telling.
Added 2:51 pm (EST)
Added 2:51 pm (EST)

M. Trubisky - QB
CHI
When asked if Mitchell Trubisky would start in Week 13 against the Lions, Bears coach Matt Nagy responded, "I don't see why not."
We do. Trubisky was horrendous in his return to the field for Nick Foles (hip/glute), completing 56.5% of his passes and coughing up a fumble-six to gift the Packers a four-score lead in the first half. He also took three sacks and averaged 5.3 YPA while missing open receivers at every level of the field. Allen Robinson got there with two touchdowns Sunday night, but this offense is clearly in the part of a shipwreck when everyone is scrounging for lifeboats. Tyler Bray will likely get looks at some point if this keeps up.
Added 2:13 pm (EST)
Added 2:13 pm (EST)

R. Jones - RB
TB1
Buccaneers coach Bruce Arians said Ronald Jones "needs to have 20 touches."
"I don't think there's any doubt," Arians said on getting Jones more involved. "He needs to have 20 touches." He also claimed RoJo's lack of touches were a result of the offense needing more wideouts on the field to play from behind. Even so, Jones caught a 37-yard touchdown from Tom Brady in the second quarter then egregiously had just one target for the rest of the game. Jones also closed the game with a single touch after he sprinted upfield for a 34-yard run mid-third quarter. Overall, Tampa Bay's running back usage has been impossible to sift through, but it's very clear that Jones been the team's best back by a wide margin over the last month. Whether Arians finally begins treating him as such is anyone's guess.
Added 1:23 pm (EST)
Added 1:23 pm (EST)

D. Waller - TE
LV1
Darren Waller leads all NFL tight ends this season with 19 red zone targets.
The size-speed specimen only had one red zone look in Week 12's 23-yard dud against the Falcons -- one of the league's best tight end matchups. Fantasy managers can write off Week 12 to a total collapse of the Raiders offense. Derek Carr has completed 14 of the 19 passes he's thrown to Waller in the red zone for five touchdowns. Meanwhile, only seven tight ends have run more routes than Waller in 2020. Waller's touchdown potential will be as high as any tight end in the league in Week 13 against the Jets.
Added 12:34 pm (EST)
Added 12:34 pm (EST)

J. Reed - TE
SF1
Jordan Reed ran 25 pass routes while Ross Dwelley ran 10 routes in Week 12 against the Rams.
Reed drew six targets, catching two for 18 yards. Dwelley caught one of two targets for three yards. Nick Mullens missed a wide-open Reed in the first half on what would have been a long gain down the middle of the field -- an errant throw that had Reed fuming on the sideline afterward. Reed is far and away the preferred fantasy option among Niners tight ends until George Kittle returns to the lineup.
Added 11:59 am (EST)
Added 11:59 am (EST)

S. Darnold - QB
NYJ1
Sam Darnold has the second lowest adjusted completion rate this season, according to Pro Football Focus.
Drew Lock is the only quarterback with a lower adjusted completion rate through 11 weeks. The adjusted rate accounts for dropped passes, throw aways, spiked balls, batted passes, and passes where the quarterback is hit while throwing. Darnold completed a measly 16-of-27 passes for 197 yards with two interceptions on Sunday against Miami. His 69.7 percent adjusted completion rate is about five percent lower than it was in 2019. Darnold's adjusted yards per attempt has taken a big hit too, dropping from 6.9 A/YA in 2018 and 2019 to 5.7 this season. The Jets might be better off with Joe Flacco under center for the remainder of another lost season. Darnold will be a reclamation project for whoever coaches the Jets in 2021.
Added 11:25 am (EST)
Added 11:25 am (EST)

K. Fackrell - LB
NYG
Giants OLB Kyler Fackrell suffered a calf injury in the team's Week 12 win over the Bengals.
Fackrell was ruled out in the third quarter. The ex-Packer has been an every-down player after arriving in free agency in March. He's been good against the run and a liability vs. everything else.
Added 11:21 am (EST)
Added 11:21 am (EST)