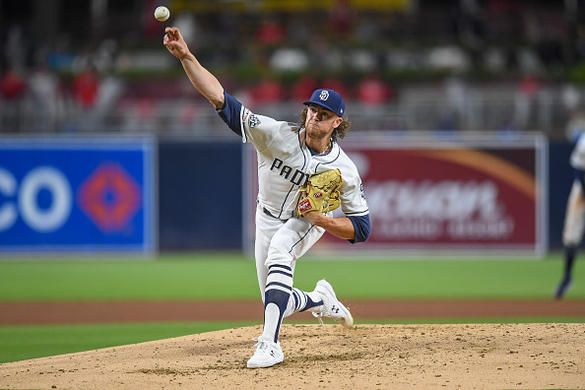 Managing a fantasy pitching staff seems to get increasingly difficult every season. Last week we examined the continued trend of batters hitting more home runs and its negative effects on most fantasy pitching categories.

Whether this recent era of increased home run production is caused by a juiced ball, advanced athletic training or batters adjusting their approach at the plate, statistics show that total runs scored have increased every season beginning in 2013. League ERA has risen from 3.87 in 2013 to 4.39 this season. Based on preseason ADPs, six of the first 10 starting pitchers taken in NFBC fantasy baseball leagues (Max Scherzer , Chris Sale , Gerrit Cole , Corey Kluber , Carlos Carrasco , Noah Syndergaard ) currently have ERAs of between 4.45 and 7.43. The average of those six pitcher’s ERAs was 2.80 in 2018.

Those pitchers’ stats will likely be close to their career norms by the end of the baseball season, but their struggles mirror the problems that many of us have been facing as we try to roster an effective fantasy pitching staff.

Recent trends can help us find some short term pitching help. There were five teams whose starting pitchers posted an ERA of 2.55 or lower over the past week: Padres (1.76), Marlins (2.02), Cubs (2.29), Diamondbacks (2.48), Yankees (2.55). Let’s pick out a few pitchers from among those teams who either aren’t widely owned in fantasy leagues, or who may have fallen off of your fantasy radar prior to this season. There’s a nice mix of youth and experience in the following group.

Joey Lucchesi ’s 4.33 ERA and 1.296 WHIP are pedestrian based on current fantasy baseball standards, but he’s probably the safest Padres starting pitcher to own based on expected season long production. He’s been a good source of strikeouts, averaging 10 K/9 in 31 career starts over the past two seasons. He relies on his sinker, which has helped increase his ground ball rate (50.7) and has resulted in a lower HR/FB rate (20.4 in 2018, 11.1 this season). He’s unlikely to be under inning restrictions this season. 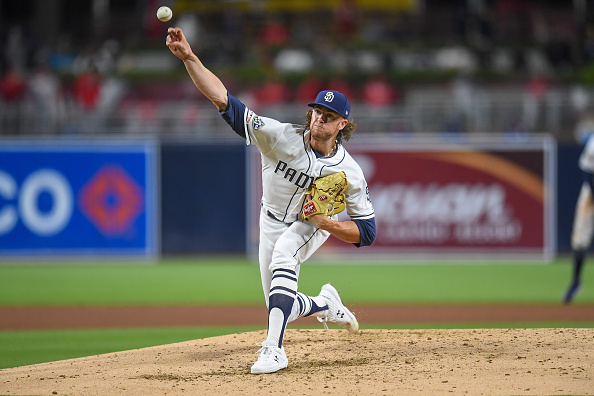 Chris Paddack has a microscopic 1.67 ERA and 0.67 WHIP. He’s a strikeout pitcher with an excellent changeup who has demonstrated outstanding control throughout his minor league career. Most advanced metrics indicate he should continue to pitch well. However, fantasy owners should be aware that Paddack had Tommy John surgery in 2016 and pitched just 90 innings last season. Keep in mind that the Padres may elect to limit Paddack’s total innings pitched this season.

Matt Strahm ’s overall stats are very good (3.05 ERA, 1.16 WHIP), however as he’s transitioned from a reliever to a starting pitcher this season, his velocity has taken a hit and so has his strikeout rate.  His SIERA and xFIP are both over five and Strahm is another pitcher whose overall innings pitched may be limited this season. Buyer beware.

Nick Margevicius, who hadn’t pitched above Single-A ball, unexpectedly earned himself a spot in the Padres rotation this season. He doesn’t overpower batters. Instead he uses his outstanding curveball, as well as his slider and changeup, to induce soft contact. A pitcher like Margevicius who throws an 88 mph fastball doesn’t generate much excitement in fantasy these days, but his 3.60 ERA and 1.08 WHIP make him fantasy relevant in deeper leagues. Expect some regression as the season progresses.

Marlins starting pitchers probably won’t provide fantasy owners with too many wins. However, while too many fantasy baseball managers avoid players on bad teams, there are two Marlins pitchers who shouldn’t be ignored.

Caleb Smith is owned in just under 55% of ESPN fantasy baseball leagues and is one of the top waiver wire adds of the week. Smith shut down the Phillies in his most recent start on Thursday, giving up a run, striking out eight and walking just one batter. It was his fourth consecutive quality start and he now owns a 2.17 ERA. Smith has posted an 11.5 strikeout rate, up from 10.2 last season, and has cut his 2018 walk rate by 1.67 to 2.17%. All three of his ERA indicators are at 3.04 or lower which indicates that while we expect some regression it shouldn’t be too severe.

Trevor Richards carries a modest 3.72 ERA into his sixth start of the season, but he’s posted four quality starts. He has continued to rely on his tremendous changeup (.162 career BAA) as well as his curveball this season, but he’s also added a cutter to his repertoire. His overall batting average against has dropped from .248 last season to .190 this season.  ERA estimators indicate he may be in for a significant dose of regression. For now, Richards is a good option in deeper leagues (15 or more teams), but if you’re dealing with major starting pitching meltdown in shallower leagues, he’ll be there for you on the waiver wire. Monitor his progress carefully. Have other options ready to deal with the potential regression ahead.

Unless your last name is Scherzer or Verlander many pitchers over 30 years old aren’t highly sought after in fantasy baseball.  Cole Hamels has enjoyed a career resurgence since he was traded to the Cubs last season. He posted a 2.36 ERA in 12 starts for the Cubbies in 2018. This season, he’s increased his ground ball rate (57.1%), posted a 3.16 ERA and 0.99 WHIP. DFS players should note that Hamels has been an excellent play when pitching at home. In 95 career innings when pitching at Wrigley Field Hamels has a sparkling 1.80 ERA and 0.937 WHIP.

José Quintana is another veteran pitcher enjoying a comeback season. He’s tweaked his overall pitch selection this season, slightly increasing the percentage of changeups he throws, and while his HR/FB rate is still rather high (15.8, up from 14.7 last season) his 50.7 ground ball rate could help limit the number of home runs he gives up. He’s walking fewer batters, and has seen an uptick in his chase and swinging strike rate so far this season. Quintana has disappointed fantasy owners in the past with his inconsistency, however ERA estimators don’t suggest significant future regression. 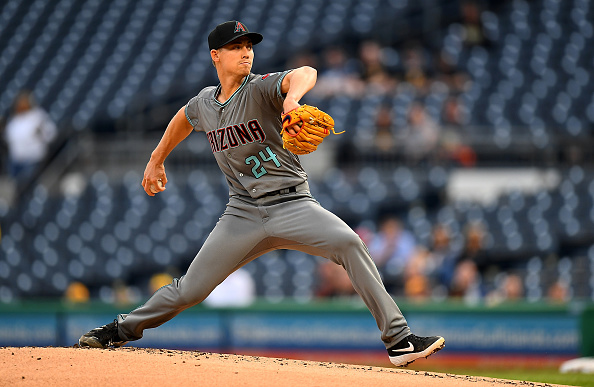 Luke Weaver has progressively gotten better this season. He’s given up two runs or less in three straight starts and has averaged eight strikeouts per outing during in those starts. Weaver is another pitcher who has tweaked his pitch selection (he’s throwing his cutter more), and significantly increased his ground ball rate (50.7 rate this season, compared to his 43.1 career rate). Predictably, Weaver is yielding fewer home runs and he’s also generating a higher rate of soft contact. He’s owned in just over 23% of ESPN fantasy baseball leagues and is actively being added this week.

With Yankees ace Luis Severino potentially out until early July, Domingo Germán has provided the Bronx Bombers’ starting rotation with a much needed boost. He’s pitching to a 1.75 ERA, striking out batters at an above average rate (9.8), and walking batters at a below league average rate (2.8). Opposing hitters are batting just .143 against German and although his ERA will probably regress, his FIP, xFIP and SIERA are all between 2.88 and 3.71. German will likely be fantasy viable for most of the season, however he pitched just 94 innings in 2018 and the Yanks may look to cap his innings pitched. He’s owned in just over 67% of ESPN fantasy baseball leagues and should be considered a safe waiver wire add or trade target.

We’ll leave you with one last pitching trend demonstrating that you can sometimes find starting pitching help in unexpected places. The Reds play their home games in hitter friendly Great American Ballpark and yet their starters have the third best ERA in baseball (3.15). Their 2.85 ERA when pitching at home is even more impressive.

We’re not suggesting you load up on Reds pitchers, and many analysts expected Luis Castillo (1.23 ERA, 10.55 K/9) to be dominant this season.

However, the fact that Tanner Roark , Sonny Gray and Tyler Mahle all have ERAs of 3.65 or lower is a bit surprising.

Of those three pitchers, Gray seems to have the most upside for the rest of the season. ERA estimators FIP, xFIP and SIERA all suggest Gray is pitching much better than his 3.65 ERA suggests. Gray is pitching effectively despite his 59.3% strand which is significantly lower than his career 71.7% rate. While Gray’s low 6.3% HR/FB rate is likely unsustainable, as a ground ball pitcher (54.1%) the level of expected regression shouldn’t be significant. In addition, his 19.7% soft contact rate is above the league average.

Who would have ever thought that as a team, the Reds would struggle at the plate (.200/.274/.368 triple slash with a .642 OPS) and dominate on the pitching mound? It’s a long season and much can change between now and October, but that’s certainly an unexpected trend!

E. Lauer - SP
MIL
Eric Lauer (illness) will join the Brewers' summer camp Friday.
Lauer has been away while battling a non-COVID-19 related illness, but it appears he's over it. The left-hander also dealt with a shoulder issue during spring training, but it would appear he's recovered from it, as well.
Added 10:04 am (EST)
Added 10:04 am (EST)

C. Knebel - RP
MIL
Corey Knebel (elbow) is expected to be part of the Brewers' Opening Day roster.
Pitching coach Chris Hook earlier this week wouldn't commit to Knebel being ready, but manager Craig Counsell said Friday that he expects the former closer to be ready to go. Knebel is 15 months removed from Tommy John surgery and shouldn't be under any restrictions.
Added 9:58 am (EST)
Added 9:58 am (EST)

A. Santander - LF
BAL
Anthony Santander and Dwight Smith Jr. have not yet participated in the Orioles' summer camp.
The team has not provided an explanation for their absences. Manager Brandon Hyde indicated earlier this week that it was possible for a player not yet in camp to still have time to get ready for Opening Day, but obviously Santander and Smith Jr. are running out of time. Santander had a mini-breakout last season with 20 homers in 93 and is in line to start in left field and bat in the middle of the lineup, if he's ready.
Added 9:07 am (EST)
Added 9:07 am (EST)