**UPDATED FRIDAY** Howard Bender starts the NFL DFS Playbook research off each week with a watch list of players he is considering for use in daily fantasy lineups. 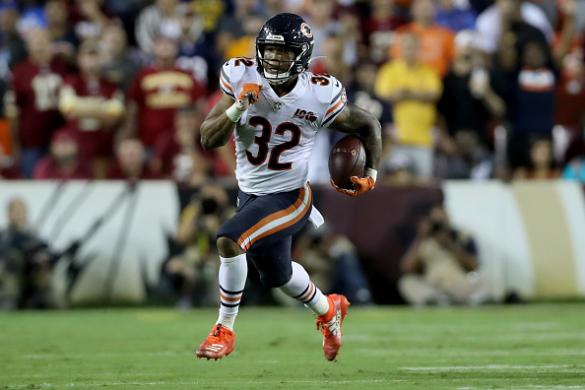 Welcome to the DFS Watch List for NFL Week 13!

While Week 12 was a successful one for those playing GPP tournaments, I'm sure glad it's in our rearview mirror. Not only did the week painfully drag on, but it culminated in what looked like the biggest waste of a Wednesday afternoon as the Steelers and Ravens left us as disappointed as those of us who actually bought into the Mike Tyson/Roy Jones Jr. fight. Yeesh. What a train wreck!

As always, we like to see how things went last week and frankly, they went pretty well. The cash examples I showed last week did not cash as we got hosed by paying up for Dalvin Cook while the value we were eyeballing -- Brian Hill , Derek Carr , Nelson Agholor , to name a few -- did not pan out. However, my Chiefs stack example GPP lineup, hit 214 points, so if you were floating around that stack, you done good. Again, these lineups are not meant to be used as your own, but they should serve as a guideline and be helpful to your own builds. If you went with that Chiefs stack, you were obviously ahead of the curve.

So what exactly did last week's Playbook deliver? As always, we like to check in to ensure we remain on the right path, regardless of overall results.

Consistent value and the highest scoring players at every position, highlight the Playbook for Week 12

All the highest scoring players made it to the Playbook including Patrick Mahomes , Derrick Henry , Tyreek Hill and Evan Engram .  The Dart Board had amazing value.  Here are some other highlights:

NFL CEH (hip/ankle) will not play in Divisional Round

NFL Taysom Hill (knee) not expected to play vs. Bucs

NFL Latavius Murray (quad) not expected to play vs. TB

C. Wentz - QB
PHI1
NFL Network's Ian Rapoport reports Eagles management has told coaching candidates that QB Carson Wentz "is fixable."
Maybe Wentz is fixable but this report doesn't move the needle much. The Eagles aren't going to attract the best coaches by admitting they have at least $31 million per year for the next four years committed to a broken player. Wentz's massive contract still has nearly $60 million in dead cap before next year so it's hard to see Wentz not being on the roster next year. It makes sense from a financial and talent perspective for Philly to try to fix Wentz. He averaged at least 7.5 yards per attempt in 2017 and 2018 before taking a small step back two years ago. Then things fell off the rails this year as he led the league in interceptions and sacks while playing in just 12 games. If there is a way to unlock the old Wentz, it's worth it for the Eagles to try because of his ceiling and how much money they owe him. His status as the team's starter next year could come down to a camp battle with Jalen Hurts, who played well in his limited action under center to close out the 2020 season.
Added 11:45 am (EST)
Added 11:45 am (EST)

J. Conklin - OT
CLE
NFL Network's Ian Rapoport reports Browns RT Jack Conklin (hamstring) and TE David Njoku (hamstring) are expected to play in the Divisional Round against the Chiefs.
Conklin's positive health update is great news for the Browns as they're going to need to play another incredible game to knock off the Chiefs. Their run game has carried them for much of the year and Conklin has been a major part of why they have been able to be so successful on the ground. As long as the Browns are within a score or even two of the Chiefs, expect them to give Nick Chubb and Kareem Hunt plenty of run. David Njoku doesn't figure to serve much of a role whenever Harriston Byrant and Austin Hooper are active.
Added 9:54 am (EST)
Added 9:54 am (EST)

C. Edwards-Helaire - RB
KC1
NFL Network's Ian Rapoport reports Chiefs RB Clyde Edwards-Helaire (ankle, hip) "has an uphill battle" to play in the Divisional Round against the Browns.
One would assume that Le'Veon Bell would be in line to take the bulk of CEH's workload on but Week 16 muddies the waters a bit. Darrel Williams out-carried Bell 10-7 and out-targeted him 6-3 in the Chiefs' final meaningful regular season game. Whoever gets the majority of the backfield touches for an offense as potent as Kansas City's is going to be valuable. Knowing which back that will be before kickoff may be impossible.
Added 9:32 am (EST)
Added 9:32 am (EST)

T. Hill - QB
NO1
NFL Network's Ian Rapoport reports Saints QB Taysom Hill (knee) is not expected to play in the Divisional Round against the Bucs.
Rapsheet also added that RB Latavius Murray (quad) is also unlikely to go. That means both of the vultures to Alvin Kamara's touchdowns are going to be out for their Divisional Round game versus Tampa Bay. Hill had eight rushing scores in the regular season while Murray was at five rushing and receiving touchdowns combined. Win or lose, expect another massive outing from Kamara this week.
Added 9:10 am (EST)
Added 9:10 am (EST)

L. Murray - RB
NO1
NFL Network's Ian Rapoport reports Saints RB Latavius Murray (quad) is not expected to play in the Divisional Round against the Bucs.
Rapoport added that QB Taysom Hill (knee) is on the wrong side of questionable. That means Alvin Kamara should finally be locked in for all of the goal line work and nearly all of the running back touches this week. Murray has five scores this season despite him not starting a single game. Without the risk of losing touchdowns to Hill or Murray, Kamara is easily the safest running back for DFS purposes this week.
Added 9:04 am (EST)
Added 9:04 am (EST)

M. Andrews - TE
BAL1
Mark Andrews caught 4-of-11 targets for 28 yards in the Ravens' Division Round loss to the Bills.
Andrews took a step back in 2020 after his 64-852-10 receiving line last season. Across 14 games, he turned 88 targets into 58 receptions for 701 yards and eight touchdowns, enough production to hang around the top-five tight end rankings for the entire campaign. Lamar Jackson's inconsistent accuracy and dominant rushing make Andrews a volatile fantasy asset on a week-to-week basis even though he is the Ravens' No. 1 or No. 2 passing-game target. Andrews, 25, belongs in the second tier of positional rankings heading into summer fantasy drafts. The 2021 season will be a contract year for Andrews.
Added 12:56 am (EST)
Added 12:56 am (EST)

D. Duvernay - WR
BAL
Devin Duvernay was not targeted in the Ravens' Division Round loss to the Bills.
A third-round speedster out of Texas, Duvernay occasionally flashed as a receiver and returner during his rookie campaign. He was unable to supplant slot receiver Willie Snead in the starting rotation, leaving him with just 20 catches for 201 scoreless yards on the year. Snead is a free agent this offseason, however, so Duvernay could be a starter in 2021. Even then, the Ravens' run-first offense limits Duvernay's fantasy appeal in dynasty formats. His profile screams "better real-life player than fantasy player".
Added 12:49 am (EST)
Added 12:49 am (EST)