Howard Bender takes a look at all the happenings around the NFL to determine whose fantasy football value may be rising or falling as we head towards Week 1 kickoff. 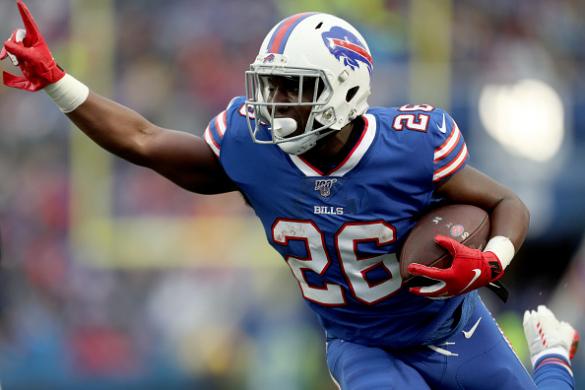 It may not seem like it, given the craziness of 2020 and all that, but the NFL season is finally here. We say ‘finally,’ but in truth, it’s really kind of taken us all by surprise. That’s what happens when you lose six months of your life and still watching MLB, NBA and NHL, right? Nevertheless, this week is going to be a big one as we rapidly approach Week 1. Some of us still have drafts to do and others are looking at setting up waiver claims. It’s the perfect time to check out the latest Fantasy Football Stock Watch. 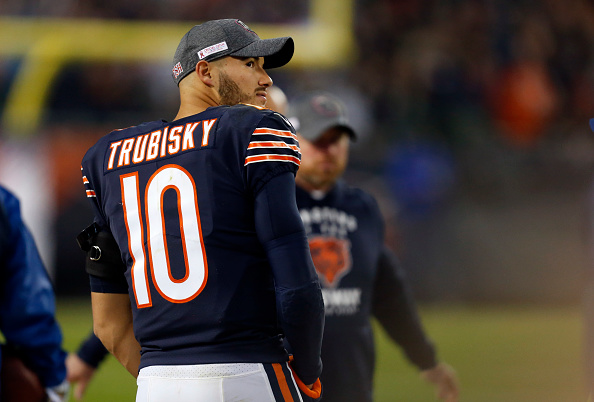 Mitchell Trubisky , QB CHI – We’re not jumping up and down for this one, but if you’re playing in a superflex league and looking for a QB3 who could be helpful during an early bye week, Trubisky was finally named the starter for the Bears this past week. Despite bringing in Nick Foles and a mentor of his, QB coach John DeFilippo, Matt Nagy has opted to open the season with a bit more familiarity and is giving Trubisky the nod…for now. We’ll have to see how short the leash is as Nagy could be on the hot seat in Chicago, so if things don’t click early, we could still see a change.

Leonard Fournette , RB TB – One man’s trash is another man’s treasure, right? Last week, Fournette was on the Stock Down side of the article and today, he is trending up…way up. Fournette gets away from a losing team, Tom Brady gets his veteran running back and Bruce Arians has a legitimate bell-cow upon whom he can rely. You also have to love the improved offensive line for the Bucs. The late addition means he will likely share the workload early with Ronald Jones , but it’s just a matter of time before his talent shines brighter. And if you’re worried about the attitude, just take a stroll through Fournette’s Twitter timeline. He’s super excited and super motivated.

Antonio Gibson, RB/WR WAS – He’s one step closer to owning this backfield all by his lonesome as Washington jettisoned Adrian Peterson from the roster over the weekend and will head into the season with Gibson, Peyton Barber and Bryce Love in the backfield. We may see Barber on the early downs, given his level of experience, but head coach Ron Rivera and OC Scott Turner are excited about utilizing Gibson in a variety of ways. He is slowly creeping up draft boards right now and you may need to use a late-fifth/early-sixth round pick to secure him. He’s a long-term investment for the season and we still have some offensive line issues to work out, but his upside might be too tough to pass up.

James Robinson, RB JAC – When you’re sitting there in the late, late rounds of your draft and looking for an upside play, believe it or not, but there may be some fantasy gold lurking in Jacksonville still. We all know Chris Thompson will handle the pass-catching duties, but Ryquell Armstead place on the COVID-IR, Devine Ozigbo is expected to be the early-down back. Will that last? Who knows? Will he hold the job all to himself? Hard to say, especially when the team’s GM says that the presence of Robinson was what allowed him to make the final decision to cut Fournette. Robinson is a 5-foot-9, 220-pound bruiser who ranks second in all-time rushing yards at Illinois State and was also a fairly reliable pass-catcher when necessary. He’s worthy of a stash spot if you have the room.

Rodrigo Blankenship, K IND – A kicker? What the heck are we doing putting a kicker in here? Well, there are plenty of leagues that still use kickers and if you aren’t into spending up for a Justin Tucker or Greg Zuerlein , then Blankenship could be that under-the-radar guy you need. The former Georgia product was a standout at the collegiate level and should see ample opportunities in this Colts offense. Indianapolis should be able to move the ball well, but as we saw in San Diego/Los Angeles, Philip Rivers can stall out insider the opposing team’s 40-yard line.

Devin Singletary , RB BUF – The more love Zack Moss gets, the more nerve-wracked Singletary owners become. There’s been all sorts of talk about his fumbling issues and now we’re hearing that Moss is expected to have a share of the pass-catching duties as well. Singletary is still the primary and we should expect him to stay that way for the most part, but the more Moss cuts into his snaps and touches, the less excited we are about drafting or trading for him. 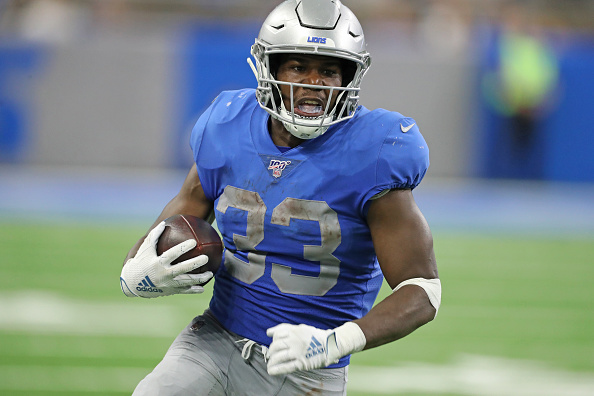 Kerryon Johnson , RB DET – The Lions signing of Adrian Peterson says it all. Where’s the love for Kerryon? We can’t find it. The team drafted D’Andre Swift, who should have a prominent role in this offense and now Peterson is expected to eat into Johnson’s early-down work. Maybe the knee isn’t back to 100-percent just yet (hence the big, bulky brace he wears) and this is just a temporary fix to ease him into the season, but the handwriting on the wall seems pretty clear at the moment.

Damien Harris, RB NE – The stars were all aligned for Harris’ breakout campaign, but not only did Sony Michel avoid the PUP list, but a broken pinkie that required surgery could land him on the IR list. Fortunately, the 2020 IR allows players to return after three weeks, but still, that’s a huge bummer for those thinking he could be the Patriots lead back to open the season. We’re not washing our hands of him just yet, but missing the first three weeks will kill the momentum he was starting to build and afford Michel an opportunity to reclaim the role all to himself.

Mike Williams , WR LAC – The news on Williams’ shoulder continues to depress those who were hoping for a breakout campaign from the Charger receiver. He still remains a late-round draft target if you can stash him away on your IR after the draft, but the latest news says he could miss most, if not all of September. The team doesn’t have much depth behind him, so a return to the field should mean a return to the targets leaderboard for him. You just have to be more patient than most fantasy owners like to be.

Mike Gesicki , TE MIA – The jury is still out as to whether Gesicki belongs on the Stock Down trend, but for now, you have to be wary of what the Dolphins are doing. In case you missed it, the team gave up a fourth-round pick for Lynn Bowden and a sixth-rounder. While most believe Bowden to be a running back based on his designation by the Raiders on Draft Day, he was always a wide receiver and the Dolphins declared him as such. He is going to be eased into the offense, but considering the state of Miami’s receiving corps, Bowden could get some looks out of the slot. That is where he could affect Gesicki’s overall value. What has made him such a fantasy darling at the tight end position is how he lined up in the slot so often last season. But now with both DeVante Parker and Preston Williams on the field, using Bowden in the slot will hinder the value of Gesicki. Again, this isn’t etched in stone, but you have to be aware of the situation and plan accordingly.

B. Edwards - WR
LV
Raiders WR Bryan Edwards (foot, ankle) is doubtful for Week 8 against the Browns.
Edwards opened Las Vegas' first three games as the starter opposite Henry Ruggs but provided little impact with 5/99 on six targets. Nelson Agholor has since usurped him, recording a 16.6% target share on 79% of the team's snaps the past two games. Agholor will likely keep the starting gig whenever Edwards is cleared to return.
Added 7:45 pm (EST)
Added 7:45 pm (EST)

N. Harry - WR
NE1
N'Keal Harry (concussion) won't play in Week 8 against the Bills.
Julian Edelman (knee, old) has also been ruled out for Sunday. New England will move forward with Damiere Byrd, Gunner Olszewski, and Jakobi Meyers in three-wide sets with Isaiah Zuber likely getting promoted from the team's practice squad. Meyers, who came off the bench to record 4/60 receiving against the Niners, is the only one in consideration for deeper fantasy leagues in Week 8.
Added 7:22 pm (EST)
Added 7:22 pm (EST)

C. LeBlanc - DB
PHI
Eagles slot CB Cre'Von LeBlanc (quad) was ruled out for Week 8 against the Cowboys.
76% of LeBlanc's defensive snaps have been in the slot this season, setting up CeeDee Lamb for a slightly better matchup on Sunday Night Football. Lamb, of course, will be catching passes from third-string QB Ben "Gucci" DiNucci. The Eagles can afford to have LeBlanc miss time this week because Dallas is in shambles.
Added 7:16 pm (EST)
Added 7:16 pm (EST)

A. Jeffery - WR
PHI1
Alshon Jeffery (foot) was ruled out for Week 8 against the Cowboys.
Jeffery is dealing with a nagging lisfranc foot injury and the Eagles have no incentive to play him with better, younger receivers on the roster. Even if he gets activated, Jeffery is likely looking at the No. 3 or No. 4 role behind Jalen Reagor and Travis Fulgham.
Added 7:10 pm (EST)
Added 7:10 pm (EST)