Too many people substitute Average Draft Position (ADP) for rankings. Howard Bender explains exactly what it is and how best to use it during your fantasy baseball drafts. 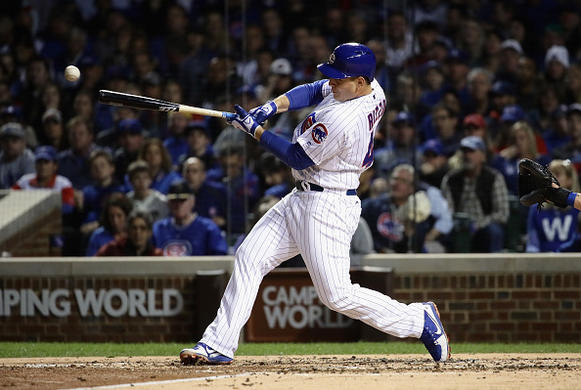 As the General of the Mock Draft Army, my whole offseason world revolves around Average Draft Position (ADP). Each week I run a series of mock drafts and then spend my weekend tabulating ADP numbers by hand with the hopes of providing you with what should be considered a valuable tool to use both in your draft prep and while you’re inside the war room. But often times people get confused by ADP and how to actually use it, so allow me to offer up this very simple crash course.

The definition of ADP is pretty straightforward. It is a number calculated based on where a player is drafted in a series of mock drafts. Usually the number is taken from a series of drafts on a particular site so that when someone says Anthony Rizzo has an ADP of 36 on ESPN, it means he is usually being drafted somewhere in the third round of 12-team drafts on ESPN.com. To oversimplify just a bit, you can take a player’s ADP and divide by the number of teams in a league and that gives you a rough estimate as to in which round he is being taken.

The main function of ADP is to get a look at where most people are taking a particular player in their drafts. It has everything to do with public perception and absolutely nothing to do, or at least it shouldn’t, with how a player is ranked. If a low-ranked player seems to be climbing up draft boards and has a steadily increasing ADP each week, you know that people like him enough to start taking him earlier and earlier in drafts. Conversely, if a guy’s ADP is dropping each week, he is obviously falling out of favor with the public. For example, Mallex Smith ’s ADP was hovering around 160 just a month ago, but with the panic about stolen bases being at a premium coupled with the glowing opinions from some of the industry’s finest pundits, his ADP continues to climb (drafted as high as 99th overall) because everyone is rushing out to grab him. Imagine how high it could jump once he’s officially named as a starting outfielder without a platoon coming of spring training. Be on the lookout for Mock Draft Army ADP Trends & Analysis and you’ll be able to see which players are rising and which are falling each week.

3.  Know the source of your ADP

Unfortunately, too many people just blindly accept ADP numbers as truth without ever understanding where the numbers actually come from. The reason I started the Mock Draft Army was because I was seeing far too many computer players in mock drafts on the bigger sites. I was also seeing a lot of people start the draft, take players through the first six rounds and then flip to auto-pick and leave the draft room. The big problem with that is the ADP numbers simply become an extension of the site’s default rankings. If the computer players are making selections or people are on auto-pick, then all they are doing is pulling players off the board in the same order the site has them ranked. For me, the two best sources are the Mock Draft Army ADP (coming soon) and the numbers from the National Fantasy Baseball Championships (NFBC). Every draft has a live player making their own selections for the entire draft.

4.  ADP is a guideline, not the gospel

One of the biggest mistakes I’ve repeatedly witnesses is when someone really wants a player but says, “well, their ADP says I don’t take them until the next round, so I’ll wait.” When someone snipes their player, they get frustrated and start complaining about ADP numbers and how stupid they are. No. Not the case at all. First of all, my philosophy has always been, if you want a particular player, get him. Don’t be stupid and use a first-round choice on a guy you can probably get in the sixth or seventh round, but if a guy’s ADP says eighth round, you can take him in the sixth or seventh if you really want him and don’t think he’s going to make it back to you. No harm in that. It's supposed to be a fun game anyway, isn't it?

Second, you need to remember that most ADP numbers are made up from a variety of different style drafts. There’s standard roto, head-to-head, mixed leagues, AL-only, 12-team, 15-team, etc. You must ALWAYS take into consideration your league’s rules and roster guidelines. You need to remember things like ‘no trading’ in the NFBC which tends to elevate the ADP of certain players such as starting pitchers. You can look at a player’s ADP for a rough estimate of where he is going, but you have to look at the flow of your draft. Are people drafting in accordance with typical ADP numbers or is the Phillies fan in your league drafting Rhys Hoskins much earlier than his ADP numbers dictates? Your draft is a very fluid thing and your use of ADP should be used accordingly.

That about covers it. It’s really not that complicated. Mock drafts are an awesome way to prepare for your big day and using ADP will help you as you hone your draft skills. Keep a copy handy when you’re in the war room, but again, use it properly. If you do, you’ll be unstoppable.

And if you'd like to join the Mock Draft Army, just email me at mockdraftarmy@yahoo.com.

MLB Acuna to have wrist examined in NYC on Wed.

J. Luplow - LF
CLE
Jordan Luplow went 0-for-3 on Tuesday, leaving him 1-for-26 to start the year.
At least that one hit was a two-run homer. Luplow figured to be an excellent platoon guy against lefties this year, but after experiencing back troubles in summer camp, he's gotten off to an extremely slow start. The Indians will likely keep using him against lefties and hope for the best, but starts against righties will be few and far between unless he goes on a tear.
Added 11:22 pm (EST)
Added 11:22 pm (EST)

E. Rosario - LF
MIN1
Eddie Rosario launched a pair of home runs on Tuesday in the Twins’ loss to the Brewers.
Rosario walloped a solo shot to right field off Brewers starter Josh Lindblom in the opening frame and also clobbered a two-run dinger to right-center field in the third inning. It was the 10th multi-homer effort of his career, but it simply wasn’t enough to lift the Twins to a victory in this one. The 28-year-old outfielder has gotten off to a frosty start at the dish, recording an underwhelming .226/.304/.548 triple-slash line across 69 plate appearances. Yet, he’s still providing plenty of over-the-field power for fantasy managers. He’s left the yard in back-to-back contests and is now up to six round-trippers on the truncated campaign.
Added 11:22 pm (EST)
Added 11:22 pm (EST)

K. Hart - SP
BOS
Kyle Hart is set to make his major league debut in a start Thursday against the Rays.
Hart has apparently looked excellent in intrasquad games at the Red Sox alternate training site in Pawtucket and will now get the call to the majors to help a pitching-starved team in Boston. The 27-year-old former 19th-round pick had a 3.52 ERA, 1.17 WHIP, and 140/53 K/BB ratio over 156 innings last season in the upper minors.
Added 11:16 pm (EST)
Added 11:16 pm (EST)

R. Acuña Jr. - RF
ATL1
Ronald Acuna will have his left wrist examined Wednesday morning in New York.
Acuna was scratched from the Braves' starting lineup on Tuesday night against the Yankees after experiencing increased discomfort in his left wrist during pregame batting practice. It's apparently something that has been bothering him for a bit, and the Braves want to get a full picture of what their star outfielder might be dealing with. Look for an update ahead of Wednesday night's game at Yankee Stadium.
Added 10:47 pm (EST)
Added 10:47 pm (EST)

H. Ynoa - RP
ATL
Huascar Ynoa will make another spot start for the Braves on Wednesday against the Yankees.
Ynoa did the same thing in the first half of Sunday's doubleheader with the Phillies and allowed one earned run over 2 1/3 innings. He's obviously not a recommended fantasy streamer versus the Bronx Bombers.
Added 10:37 pm (EST)
Added 10:37 pm (EST)

T. Alexander - RP
DET
Tyler Alexander surrendered five earned runs over 3 2/3 innings Tuesday in a loss to the White Sox.
Alexander got moved into the Tigers' starting rotation after a brilliant long relief outing last week against the Reds, but the magic didn't last in his new role. He gave up four runs in the first inning and one more on an Edwin Encarnacion solo shot in the top of the fourth, watching his season ERA balloon from 1.17 to 4.76.
Added 10:28 pm (EST)
Added 10:28 pm (EST)

E. Jiménez - LF
CWS1
Eloy Jimenez slugged his fourth home run of the season on Tuesday as the White Sox beat the Tigers 8-4.
It was a first-inning three-run shot off Tigers left-hander Tyler Alexander. Jimenez also added an RBI single in the top of the sixth, totaling four RBI on the night. The 23-year-old outfielder is starting to pick up some steam after a relatively sluggish start and could be ready to go on absolute tear for the Pale Hose.
Added 10:23 pm (EST)
Added 10:23 pm (EST)

Y. Moncada - 3B
CWS1
Yoan Moncada is likely to get a day off Wednesday.
Moncada went 0-for-5 with two strikeouts on Tuesday night against the Tigers and White Sox manager Rick Renteria said after the game that the third baseman has been playing through soreness and fatigue for the last week. Chicago is off on Thursday, so a day off Wednesday would allow Moncada a good stretch of rest.
Added 10:19 pm (EST)
Added 10:19 pm (EST)