Howard Bender gives you the hot takes rundown from all the action fantasy football owners saw during Week 4 of the NFL season. 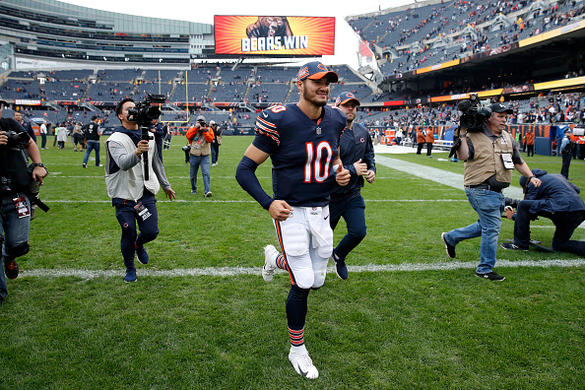 For weeks into the NFL regular season and the craziness continues. After last week’s series of upsets and fantasy nightmares, Week 4 was explosive. We saw five 400-yard passers, another eight 300-yard passers, seven 100-yard rushers and 24…..yeah, that’s right…not a typo…24 100-yard receivers (tight ends and pass-catching running backs included). We saw three overtime games and while I didn’t do the official count, I’m willing to bet that if you took the over in every game played this week, you did pretty well for yourself.

Of course, we also hit plenty of lows, so while a points bonanza is always fun to celebrate, let’s get down and dirty with some Week 4 hot takes.

The Bears (minus Jordan Howard ) are the No. 1 team in the NFL

Forget the Rams. Forget the Vikings. Forget anyone and everyone in the AFC. The Bears are where it’s at right now and Mitchell Trubisky is already waiting to be enshrined in Canton. Actually, let’s get his name right – Truthbisky – because he is. This kid was absolutely fantastic in the Bears domination of the Bucs and the crazy part was that he only needed 26 pass attempts to post 354 yards and six touchdowns. I said it earlier in the week that we were in the calm before the storm and it felt like Trubisky just need that one confidence-booster of a game for this offense to start clicking. Well, nothing like a match-up against an overrated Bucs team whose defense has been, and always will be, atrocious, to get the ball rolling. Virtually everyone who touched the ball was productive as all five receivers (including RB Tarik Cohen and TE Trey Burton ) did a little end zone dancing.

Of course, there’s one exception and this one needs to be sorted out fast for those of us who own Jordan Howard . WTF was that? He had 11 carries for 25 yards and, truthfully, I don’t remember seeing him touch the ball 11 times. At least half of those touches came in the end when the game was blown so wide open, that literally nothing he did mattered. Nothing. The dude was on a milk carton for at least the first three quarters. Looking at his game log, it’s somewhat evident that he doesn’t fit Matt Nagy’s style as he’s seen 15 or fewer carries in three of the first four games while Tarik Cohen remains involved and was leaned on heavily in this one. Now we did see something similar to this at the start of last year, so the question now is whether to accept the usage of the first few games and move on or if dumping Howard is really what’s needed. We’ve got a bye week and a soft Miami run defense in Week 6 to decide.

Leonard Fournette is Made of Glass

Well now this is just depressing. Not sure there’s even a way to spin this to a positive. Last week, we lost Fournette right before game-time as the Jaguars said he was still dealing with his hamstring issue. He was a limited participant at practice all week and leading up to kickoff in Week 4, he was good to go. Eleven touches and 30 yards later, he was on the bench for good and his fantasy owners sat with their heads in their hands, watching in disbelief as T.J. Yeldon found the end zone twice in Fournette’s absence. Really? Really, Leonard? Are your hamstrings made out of frayed thread? Are they just pieces of uncooked spaghetti? Do you deserve the injury-prone tag? It sure seems that way and now all of us who wasted a first-round pick on you are left to pick up the pieces and see if we drafted well enough to withstand your frailty.

Don’t give me this crap about game flow and how the Dolphins were forced to abandon the run. It certainly didn’t start off that way this week and it certainly wasn’t the case last week. In fact, the Drake has seen his carries reduced each and every week, from 14 to 11 to five and now three yesterday. Yeah…three. And it doesn’t look like it’s getting any better anytime soon. Next week Miami plays the Bengals who may be giving up a ton of points but they’re also scoring a ton. Advantage: Passing game. Then it’s the Bears in Week 6? Come on. That’s not even fair. I’d say there’s maybe a 10-percent chance he sees double-digit carries in either game and by the time Week 7 rolls around, people couldn’t pay you enough to start this clown.

They Are Who We Thought They Were

The Buffalo Bills. Come on. You really didn’t think they were going to hang with the Packers, did you? Sorry #BillsMafia. It was one heck of a one-game ride.

Great song by Three Dog Night. But that’s about it. Eli Manning was in one of the most beautiful match-ups, had all sorts of weapons at his disposal and came up way short of delivering the goods. Now yes, you have to throw a ton of shade the offensive line’s way. The pass rush of the Saints was not intimidating, yet these guys continue to crumble like day-old coffee cake. But how long are we going to continue giving the former two-time Super Bowl MVP the benefit of the doubt here? He was sailing throws, holding the ball for too long and just overall, looking like he’d rather be anywhere than on the field losing to daddy’s old team. If this group doesn’t get it together soon, it may be time to start dumping your shares of Odell Beckham and Sterling Shepard . Saquon Barkley may be the only worthwhile fantasy guy on this roster and even his value is going to be tested in this nightmare.

What in the world is this stupid obsession Sean Payton has with Taysom Hill ? Has he just been craving an opportunity to overuse gimmick and gadget plays? Another fake punt by the Saints started the ball rolling this week and that’s fine. You want to get kooky on special teams, go ahead. But why the heck do we have Hill throwing passes inside the red zone? The guy had never thrown a pass before, you have Drew Brees …Drew frickin’ Brees…on your roster and you want to get cute with some guy you picked up off waivers from Green Bay? If Payton continues to do this, Brees owners have every right to egg his house on Halloween.

After everything we went through last week, seeing Jacoby Brissett come in for the last-second Hail Mary and criticizing Luck’s should condition, the six-year veteran gave the finger to all his doubters this week. He threw 62 passes for 464 yards and four touchdowns and when they had the chance for a 50-yard hail Mary at the end of the first half, they did not make a change at QB and Luck hurled the ball downfield, at least five yards deep into the end zone. I will never doubt him again and I will see myself out now…

Do I have to start taking more notice of Corey Davis ? He caught 9-of-15 targets for 161 yards, including the game-winning touchdown. That’s now two games with double-digit targets and if Marcus Mariota is good to go, we could finally start seeing something here.

Not to get too bragadocious, but I called the Tajae Sharpe on last Friday’s SiriusXM show. He was in the Playbook this week too, so hopefully you threw the dart with me and hit the bullseye.

The Lions are a work in progress and need to pound the run some more, but Kerryon Johnson is going to be a thing moving forward, so if you’re wheeling and dealing, you may want to target him.

Ezekiel Elliott is a beast but at some point, defenses are going to shut him down consistently because the Cowboys just don’t have anyone else. He’s money in the bank for keeper leagues, but this might be a great sell-high opportunity in re-drafts formats.

Welcome back, Deshaun Watson . We’ve missed you. And thanks for bringing your friend Keke Coutee . He looks like he’s going to be a spectacular addition to this offense. Now if we could just find a running back who doesn’t suck as much as Lamar Miller .

If anyone sees the Browns defense, please contact the authorities in Cleveland and let them know their whereabouts. We don’t need to get into the growing pains for Baker Mayfield . We knew those were coming. But this kid needs a little defensive support so he’s not asked to throw 40 times a game.

Pete Carroll hates your fantasy team. No Chris Carson ? That’s fine. We’ve got Rashaad Penny , our No. 1 draft pick. Oh wait….here’s ? You gotta be kidding me!

C.J. Beathard is a gamer.

The Chargers defense is horrible without Joey Bosa .