The Fantasy Football Fallout of Josh Gordon to the Patriots

Howard Bender shares his thoughts on Monday's trade in which the Cleveland Browns sent WR Josh Gordon to the Patriots for a fifth-round draft pick and how fantasy football owners should handle it. 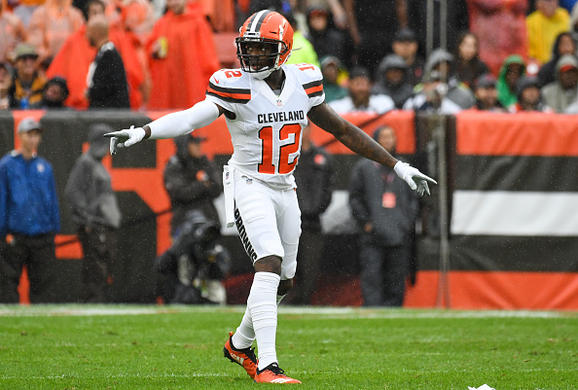 When the Cleveland Browns announced on Saturday they were making plans to release Josh Gordon Monday, the real Howard Bender Bender got a little sad. You root for people to beat addiction; to get their lives back on-track and be productive members of society. Unfortunately, fantasy Howard Bender was in control of the Twitter timeline at that point and sent the following message to fantasy football owners everywhere:

You: Should I stash Josh Gordon on my bench? Someone has to pick him up, right?

Now fantasy Howard Bender isn’t a soulless monster. He too was rooting for Josh Gordon to succeed. But knowing the deluge of tweets, emails and posts from all other social media outlets where people find him would be rushing in like a tsunami, he made a pre-emptive strike with the hope of avoiding such an onslaught. He succeeded and everyone had a good laugh.

OK, the mood is set. I’ll stop being a douche and referring to myself in the third person.

Let’s get to the big story of the day and that’s the Patriots trading a fifth-round pick to the Browns in exchange for Gordon and they also get the added insurance of a compensatory, late-round pick from the Browns should Gordon fail to be active for 10 games.

People are going absolutely nuts with comparisons to Randy Moss in 2007 and those who hastily dropped Gordon over the weekend are kicking themselves. Probably worse actually. Any other team and they’d be okay, but going to the Patriots…? Working with the GOAT…? You would have thought someone just won Powerball and now can’t find the winning ticket.

Is this really like winning the fantasy football lottery, though? Are we to believe Belichick has some mystical hold over players and is able to right their wrongs and get them to fly the straight and narrow? It certainly worked for Moss, but there’s a piece of me that fails to understand how or why people don’t see the difference between handling an immature kid and handling a drug addict who clearly needs more of an isolationist approach to holding onto his sobriety. If he hasn’t already lost his grip already.

But you’re not here for the life lessons, are you? You want to know what to do with Josh Gordon and your fantasy team. OK, so here’s what I’m thinking:

So that should cover it as we head into our waiver period tomorrow. Be smart. Be sensible. There is no reason to get carried away after everything we’ve seen from Gordon over the last several years shows you the juice isn’t worth the squeeze. Your entire fantasy season depends on how crazy you get with this. Be calm and sensible and you’ll be fine. Lose your head and everything goes up in smoke (pun intended).

J. Doctson - WR
NYJ
Jets WR Josh Doctson has opted out of the 2020 NFL season.
Doctson was among a handful of players who opted out just before the 4 p.m. deadline. A former first round pick, Doctson would not have been a fantasy factor this season barring a rash of Gang Green wideout injuries. Doctson played in one game for the Vikings last year after three disappointing seasons in Washington.
Added Yesterday 4:34 pm (EST)
Added Yesterday 4:34 pm (EST)

M. Crosby - DL
LV
Raiders placed DE Maxx Crosby on the reserve/COVID-19 list.
It's unclear if Crosby has coronavirus or has merely come into contact with someone who does. The No. 106 overall pick of last year's draft, Crosby had a sensational rookie year, registering 10 sacks and four forced fumbles. He still has over a month to get conditioned for Week 1.
Added Yesterday 4:27 pm (EST)
Added Yesterday 4:27 pm (EST)

K. Vaughn - RB
TB1
Bucs activated RB Ke'Shawn Vaughn from the reserve/COVID-19 list.
RB Raymond Calais and RB Aca'Cedric Ware also came off the team's COVID-19 list. Vaughn returns to action a day after Bucs HC Bruce Arians said RB Ronald Jones would be the "main guy" in the Tampa backfield. Vaughn's ADP has dipped into the eighth round of 12-team leagues. With a further ADP drop, the rookie is shaping up as a solid stash in redraft leagues, especially for those who don't put much stock in Arians' backfield proclamations.
Added Yesterday 4:21 pm (EST)
Added Yesterday 4:21 pm (EST)