The decision of whether or not to handcuff your players to their back-ups is a continuous debate. Howard Bender explains why it's necessary, but on a case-by-case basis while also providing you with an early look at the Fantasy Alarm Running Back Handcuff Grid.

Though some may dispute the strategy or the need, handcuffing is an extremely important concept in fantasy football. We’ve all heard the phrase “next man up” thrown around and with injuries being so prevalent in the NFL, your knowledge of the back-ups is vital to your success in this game. 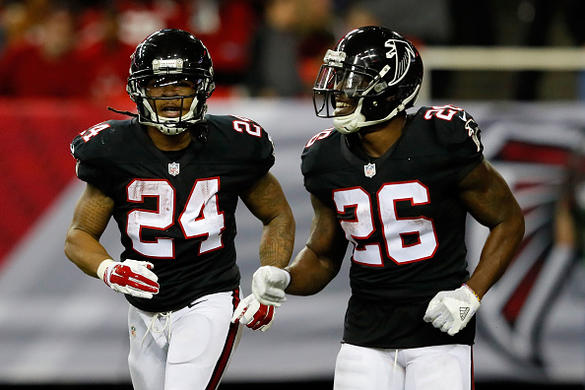 The two key components involved, and how you have to view handcuffing, is whether or not there is a clear-cut handcuff worth drafting and what kind of bench you want to build for your roster. If you draft Devonta Freeman , you should handcuff him to Tevin Coleman . Freeman will see the bulk of the work as the lead runner while Coleman gets mixed in, but should Freeman get hurt, Coleman immediately becomes the Falcons’ lead back. But what happens if Jerick McKinnon goes down in San Francisco? Will it be Matt Breida or Joe Williams ? And are either guy worth the draft pick as a handcuff or do you look to build your depth with someone who may have a clearer path to lead-back touches?

That will lead you to determining how you want to build your bench, because how deep your bench is will have a major impact on who or how you handcuff. If you only have a four or five-man bench, you may want to limit your handcuffing to just the sure-things – Freeman/Coleman, Derrick Henry /Dion Lewis , Dalvin Cook /Latavius Murray . Pairing up Kenyan Drake with either Frank Gore or Kalen Ballage may not be the wise move. Deep benches provide you with way more wiggle room in your decisions, but you also need to make sure you leave room on that bench for back-ups at other positions.

While many reserve the concept of handcuffing to running backs, keep in mind that the notion is not exclusive to the position. Look at quarterbacks, for example. Are you going to draft Tyrod Taylor without stashing Baker Mayfield ? What about A.J. McCarron and Josh Allen ? Sam Bradford and Josh Rosen ? Whether it’s in a best-ball or seasonal format, some of these unheralded quarterbacks need to be handcuffed to the youngsters we expect to see work during the season or you run the risk of losing a player outright for more than just a couple of weeks.

It’s a little different with wide receivers and tight ends. You should know the depth chart of each team, but the notion of “next man up” can be a much more fluid situation. If a team loses it’s primary wideout, the X-receiver in most cases, the player who often lines up as the Z-receiver could be moved to the other side of the field and become the X. Some teams will leave their Z-receiver alone and utilize a bench player as the new X, or possibly even move the slot receiver to the outside. You have to view each potential handcuff on a case-by case basis and, often times, it doesn’t pay to stash a team’s WR4 or 5.

For tight ends, you need to look at a number of different factors. Some tight ends are strong pass-catchers while others play exclusively as blockers. Not only do you need to look at the TE3 or 4 on the depth chart, but you also need to study the team’s offensive line to understand just how often a tight end will be deployed into the receiving game. A team like the Eagles could use Dallas Goedert the same way they use Zach Ertz , but would the Vikings use David Morgan the same way they use Kyle Rudolph ? Perhaps not.

Overall, it comes down to personal preference, draft strategy and risk aversion. Some people like to play it safe and lock down a player and his expected back-ups. They choose to secure a team’s backfield, for example. That way if anyone does get hurt, they still have a slice of that team’s offense. Some people like to build their depth with players who stand a greater chance at immediate playing time. Maybe they prefer a few extra wide receivers to play the match-ups each week. If that’s the case, you may not have room for a guy to just sit on your bench waiting for the “what if” to develop. Again, we recommend you treat it on a case-by-case basis. For some players it makes sense to commit. For others, it doesn’t.

Now, we’re still a long way away from finalizing this list as so many things can change during training camp and the preseason games, but let’s take a preliminary look at what will be the Running Back Handcuff Grid throughout the season.

With so many teams going with a multi-player approach in the backfield, we’ve tried to organize this in such a way that you are able to see which teams have a “bell-cow” as well as what the potential carries/situational breakdowns should look like for all the teams without an every-down back. Some lines are blurred, but the general consensus is that the primary runner’s handcuff is not usually the third-down back. That player should be expected to, barring injury, maintain that role even in the wake of a primary runner missing time.

J. Hanson - OL
GB
Packers signed No. 208 overall pick C Jake Hanson to a four-year contract.
Hanson (6’4/303) was a four-year starting center at Oregon who earned an All-Pac 12 honorable mention every season. His experience and competitiveness put him on the NFL’s radar, but he’s a well below-average athlete. He ran the 40-yard dash in 5.50 seconds and lacked the strength to be put in one-on-one situations on tape. Hanson will compete for a final roster spot this offseason as a 23-year-old rookie.
Added 6:38 pm (EST)
Added 6:38 pm (EST)

B. Bartch - OL
JAC
Jaguars signed fourth-round OT Ben Bartch to a four-year contract.
Bartch (6'5"/309), a converted D-III tight end who has since bulked up from 210 points in his senior year of high school, made 27 starts at left tackle in his final two seasons with the St. John Johnnies before turning heads with a successful Senior Bowl week. While his technique is impressively sound for someone relatively new at the position, there are concerns he won't be able to compensate for his weaknesses — trouble at contact, feeble one-on-one drive, core strength issues — at the next level. The NFL will present competition the likes of which Bartch has never seen but his promising building blocks could entrench him as a starter on the right side if he can develop.
Added 6:34 pm (EST)
Added 6:34 pm (EST)

M. Moore - QB
KC
Chiefs re-signed QB Matt Moore to a one-year contract.
It only makes sense given the need for continuity without actual offseason reps this year. The Giants had also shown interest in Moore, who completed 49-of-71 passes for 542 yards and three touchdowns in his two spot-starts for Patrick Mahomes last year. He'll again hold Mahomes' clipboard throughout the season barring another injury.
Added 2:07 pm (EST)
Added 2:07 pm (EST)

J. Simmons - DB
DEN
ESPN's Adam Schefter reports Broncos S Justin Simmons is expected to sign his franchise tender in the next 48 hours.
The two sides are still reportedly working towards a long-term deal by Wednesday's deadline. Barring a lucrative extension, the 26-year-old will make $11.441 million this upcoming season. PFF's No. 2 graded safety with an All-Pro nod last year, Simmons will undoubtedly garner a four-year contract worth upwards of $15 million annually. Yannick Ngakoue, Shaq Barrett, Chris Jones and AJ Green remain the only four franchised players who have yet to sign their respective tenders.
Added 12:38 pm (EST)
Added 12:38 pm (EST)