Howard Bender checks in with the MLB stolen base leaderboard for both players and teams as well as which catchers are allowing the greatest amount of theft on their watch to help fantasy baseball owners stay pace with the category in fantasy baseball. 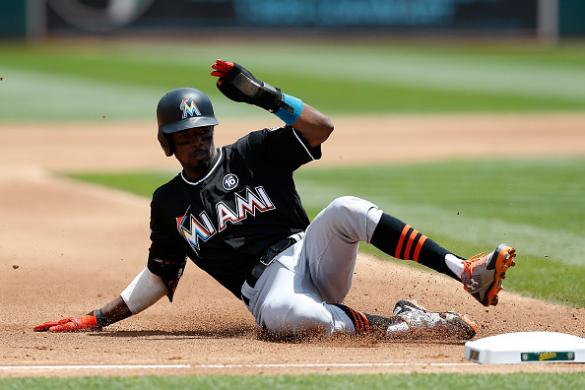 It’s been a little while since we checked in on the stolen bases, so now that we’re past the two-month mark in the season, we can see how the data is looking now in comparison to what we saw last time (steals being up on the year) we looked.

Here’s the current player leaderboard as of games played through Sunday, June 4, 2017:

I left in stats that pertain to on-base work as that obviously gives you a strong idea as to just how much opportunity these guys create for themselves. You know the old adage, “You can’t steal first base,” and as annoying as someone sounds when they say it, it still holds true. Of course, you’ve got chuckleheads like Hamilton and Peraza, both of whom the Reds have running like a bunch of jackrabbits out there, where the on-base concerns are slightly lessened, but for Buxton, Dyson and even Villar, there should be some worry as to where they finally end up on the leaderboard. The top 20 cuts off a nine steals right now and while that will steadily increase as time goes on, you have to wonder where these three will end up come year end and just how much further behind the overall leader they will be.

High strikeout rates are also a killer which means players like Broxton, Buxton and Villar have some added concerns. Buxton and Villar at least have a slightly above-average walk rate, but Broxton is going to have trouble seeing opportunities given his plate discipline. Of course, it may never matter as no manager is going to freely give a guy the green light with just a 50-percent success rate. Kevins Pillar and Kiermaier are guilty of that one too.

Keep your eyes on the number of opportunities for Dyson as well as the Mariners are getting Mitch Haniger back soon. Dyson will still see the majority of at-bats from center field, but GM Jerry Dipoto did say that Ben Gamel and Guillermo Herdia would platoon in left field with Heredia occasionally spelling Dyson in center. It doesn’t seem like it would be a major cut into Dyson’s playing time, but with slumps we’ve seen him fall into, it’s worth noting.

Injuries will soon know both Trout and Maybin from the leaderboard, but while Trout is out for another seven weeks, Maybin should be back relatively soon and if he can maintain this 16-percent walk rate, he should be back on it soon enough. He’s only maintained double-digit walk rates during his time spent in the minors, so the likelihood of that seems a bit low. However, if he does find a way, and can stay healthy, perhaps there’s still a smidgen of fantasy value left in my Fantasy Achilles.

Names we could/should see creep up into our top 20 soon include Brett Gardner, Christian Yelich and possibly even Aaron Hicks depending on how long Jacoby Ellsbury is out.

And here’s what the overall team leaderboard looks like around MLB for the same time period:

Always important to just keep tabs on which teams are doing the most running. For those who will soon be in need of some stolen base streaming, head-to-head leaguers, you should probably put together a watch-list of potential pinch-runners and late game defensive replacements who could find their way into some stolen base situations.

Players like Hernan Perez, Delino DeShields Jr., Shin-Soo Choo, Ben Rever, Michael Taylor and…forgive me…Tommy Pham, could prove to be decent streaming assets moving forward. You won’t find a burner among this group really, but they’re definitely better than trying to fish off guys with speed on teams like the Mets, Orioles, Cubs, Rockies or Braves.

And what stolen base piece would be complete with the addition of which catchers just plain suck at throwing out baserunners? Well here you go…

While I can’t map it out for you here, you should definitely be paying attention to which of your players are facing or could be seeing plenty of these 10 backstops who own the worst caught-stealing percentage (CS%) in the majors right now. I’ve been targeting those lesser-known, fringe guys who are in the same division as a few of these catchers and it’s definitely helped me stay competitive in the category, especially in leagues in which I don’t own more than one or two players from the top-20 leaderboard up above.

And one last thing to note:

C. Sneed - RP
HOU
Multiple reports state that free agent right-handed pitcher Cy Sneed is being pursued by the Tokyo Yakult Swallows.
This is the same club that signed former Pittsburgh Pirate Jose Osuna recently. Sneed, 28, appeared in 18 games with the Astros in 2020, and he registered a 5.71 ERA, 1.85 WHIP and 21/10 K/BB ratio. He's been an up-and-down arm over the last couple of seasons, and a successful stint in Japan could help improve his stock going forward.
Added Yesterday 11:44 pm (EST)
Added Yesterday 11:44 pm (EST)

J. Osuna - 3B
PIT
Jon Heyman of MLB Network reports that the Jose Osuna has signed with the Tokyo Yakult Swallows.
The Pirates designated Osuna for assignment last week, and he's found a new home relatively quickly. The 27-year-old hit just .205/.244/.397 last year with four homers and a 16/4 K/BB ratio in 82 plate appearances. The year before, however, Osuna hit 10 homers with a .756 OPS in 95 games. If Osuna hits well in Japan, it certainly seems likely that he could be back in an MLB role in a year or two.
Added Yesterday 8:46 pm (EST)
Added Yesterday 8:46 pm (EST)

C. Martínez - SP
STL
Hector Gomez of Z101 Sports reports that prosecutor Osvaldo Bonilla will request a warrant against Cardinals pitcher Carlos Martinez.
The warrant comes after Martinez participated in a street party the previous weekend in the Dominican Republic. He will be charged with violating all the social distancing protocols and the mandatory use of masks at the gathering. A statement on Monday from the Cardinals acknowledged that they were "gathering details  about his participation after a video surfaced that showed him riding a motorbike with a passenger through a crowd on on a seaside street. More information on the potential arrest should present itself in the coming days, but it's possible Martinez will face disciplinary action on top of any punishment he receives for the violation. Derrick Goold of the St. Louis Post Dispatch tweets that the hurler is expected to pay fines, according to a representative.
Added Yesterday 8:23 pm (EST)
Added Yesterday 8:23 pm (EST)

Y. Molina - C
STL1
In an interview with Mas Que Pelota, free agent catcher Yadier Molina mentioned that the Yankees, Mets, Padres and Angels have shown interest this offseason.
Molina, 38, also notes that he would like to return to St. Louis, and that he wants to play two more seasons. This comes a couple weeks after a report from Jon Heyman of MLB Network noting that there were 3-f4 other teams long with the Yankees, Mets and Cardinals were interested in the backstop. It still seems very likely that the potential Hall of Famer stays in St. Louis, but it doesn't appear it will be from a lack of interest.
Added Yesterday 4:12 pm (EST)
Added Yesterday 4:12 pm (EST)

R. Arozarena - LF
TB
According to the Mexican newspaper PorEsto, Randy Arozarena has been released after a 48-hour hold and will not face charges for a domestic incident involving his daughter and his daughter's mother.
Arozarena was detained in Mexico's Yucatan state on Tuesday on allegations of domestic violence and a disagreement over custody of the young child. His lawyer, Carlos Chable, told PorEsto that "there were not enough elements to bring it to trial" (translated from Spanish) and that "there is no longer a crime to prosecute" (also translated). Arozarena could still be subject to some sort of discipline from Major League Baseball once the commissioner's office completes its own investigation into the incident, which was partially caught on video.
Added Yesterday 12:34 pm (EST)
Added Yesterday 12:34 pm (EST)

W. Franco - SS
TB1
Rays SS prospect Wander Franco is headed back to the United States for further evaluation of an arm injury.
Franco came down with discomfort in his right biceps earlier this week while playing for Leones del Escogido of the Dominican Winter League, and there's at least some level of concern that it might be serious. The 19-year-old shortstop, widely considered the top overall prospect in baseball, had batted .350/.435/.500 with one home run and one stolen base through five games (23 plate appearances) this winter in the DOWL.
Added Yesterday 10:31 am (EST)
Added Yesterday 10:31 am (EST)

B. Colón - SP
FA
Bartolo Colon told Hector Gomez of Z Deportes that he wants to play one more year in the majors and retire as a Met.
Colon said the same thing prior to last season before signing with a Mexican League team. He will turn 48 next May and hasn't pitched in the majors since 2018 and with any level of effectiveness since 2016. So, as fun as it would be, it's highly unlikely to happen. The odds are good that "Big Sexy" has thrown his last pitch in the big leagues.
Added Nov 25 6:35 pm (EST)
Added Nov 25 6:35 pm (EST)