Kicking Rocks: Get Him on the IL NOW!

The White Sox continue to delay Luis Robert's placement on the IL and Howard Bender thinks fantasy baseball owners should be ready to make changes to the rules. 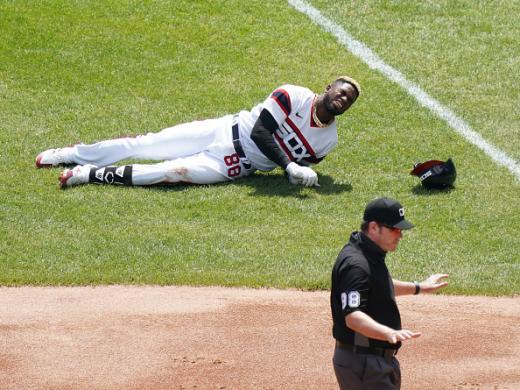 The loss of Luis Robert is spilt milk. Injuries happen and crying over them is pointless. Just ask the rest of your league. Zero sympathy. We all get hit throughout the season and it’s up to you to find proper replacements, whether it’s through the waiver wire or trades.

For those who don’t know what happened, let me do a quick summation –

Luis Robert left Sunday’s game with an apparent leg injury. During the post-game press conference, White Sox manager Tony LaRussa said Robert would be placed on the 10-day IL on Monday. With weekly waivers set to run Sunday night, you were not able to move Robert to your IL spot, thus forcing you to either drop Robert or another player if you wanted to put in a claim for another player. If you didn’t have someone to drop, you had to wait.

But these things happen on the regular. A late injury on Sunday usually means the player is going to go for tests Monday, the team will evaluate and then put him on the injured list. With games not starting until 7pm ET, we still had plenty of time. Maybe we didn’t get a guy during waivers, but most leagues with weekly lineups offer up a first come, first served period, so you can still pick someone up and not take a zero for the week. We just need for the White Sox to place Robert on the IL before the Monday games start.

This is me all day Monday:

I say “like a schmuck” because it finally dawns on me that the White Sox don’t play on Monday and they aren’t likely to make a roster move until they have to on Tuesday. Of course, I’m also thinking that maybe they’re thinking he doesn’t need an IL stint. Maybe the tests revealed the injury wasn’t as bad as originally anticipated.

Well, that thought was as fleeting as you could get when the White Sox announced that Robert suffered a Grade-3 right hip flexor strain (a complete tear) and he wouldn’t resume baseball activities for at least 12-16 weeks. For you mathematically-challenged folk, that’s three to four months, so yes, you can kiss that baby goodbye. It’s as close to a season-ending injury as you can get without saying “season-ending.”

You would have thought information like that would have expedited a move to the injured list for Robert, but no. Again, the White Sox don’t play until Tuesday so they can just sort things out Monday night and Tuesday morning. Of course, where does that leave us in the fantasy community? Yup – crawling through a fantasy sewage pipe like we’re Andy friggin’ Dufrane; except that pipe now takes a full week to trudge through and we’re back to competing with the rest of the league just to find a replacement for a guy we all knew was headed for the IL Sunday night.

Now, you might think this is an isolated incident and that delayed placement on the IL doesn’t happen all the time, but that’s just not the case. Look at the start of the season. Every single year we deal with this kind of nonsense and many of us head into the season with injured players taking up our bench spots because their teams haven’t made the official move. Every year. Don’t believe me? Just talk to anyone who participates in the League of Alternate Baseball Reality (LABR) where it got so bad, commissioner Steve Gardner was forced to compile a list every year and make exceptions for people who wanted/needed to pick up players but couldn’t because MLB teams, and subsequently, fantasy platforms, didn’t have the proper injury designation set.

This is easily remedied, but fantasy commissioners and platforms have to be in lock-step. If a guy gets hurt and the team says he is going to be placed on the Injured List, then there should be a Commissioner’s Exemption that allows for said player to be placed on the IL and the fantasy team can make moves. It has to be a team announcement, though. Not speculation. In this case, LaRussa said the team was making the move. Therefore, an exemption is warranted. If it’s just some random beat-writer speculating that a player lands on the IL, that’s no good. Not enough. But if the team does, we shouldn’t be hampered for the week because the team is dragging its feet on the inevitable.

Talk to your commissioners today and have the exemption rule implemented for next year. It’s too late for it now as people have already suffered. But next year…? We all play by the same, new-and-improved rules.

Oh yeah…and in case you’re wondering, it’s 2pm ET on Tuesday and Robert STILL is not on the 10-day IL. This is garbage. Hot. Stinkin’. Garbage.

K. Bryant - 3B
CHI1
Kris Bryant (hand) is in the Cubs starting lineup on Thursday versus the Mets.
The 29-year-old has been day-to-day after being hit by a pitch on the hand Tuesday by Taijuan Walker. Bryant is having a fantastic season so far heading into free agency, batting .292/.374/.544. The star third baseman is safe to add back into fantasy lineups.
Added 4:38 pm (EST)
Added 4:38 pm (EST)

E. Rosario - LF
CLE1
Eddie Rosario went 1-for-5 with a solo homer Thursday in the Indians' defeat of the Orioles.
The fourth-inning drive to right-center off O's starter Jorge Lopez was Rosario's first home run this year at Progressive Field. He also has only four home runs on the road and is batting .249/.295/.369 overall.
Added 4:33 pm (EST)
Added 4:33 pm (EST)

B. Wieck - RP
CHI
Cubs recall LHP Brad Wieck from Triple-A Iowa.
The left-hander has pitched well while in the majors this season, carrying a perfect ERA with a 1.13 WHIP over eight innings. Wieck was called up to take the place of Robert Strock, who was optioned to Triple-A Iowa Thursday.
Added 4:29 pm (EST)
Added 4:29 pm (EST)

J. López - SP
BAL
Jorge Lopez gave up five earned runs in just 4 1/3 innings Thursday in a loss to the Indians.
Lopez gave up homers to Jose Ramirez, Bobby Bradley, and Eddie Rosario as the Orioles lost their 19th consecutive road game. The record for consecutive road losses is 22, shared by the 1943 Philadelphia Athletics, the 1963 New York Mets, and now the 2021 Arizona Diamondbacks. Lopez will carry a 5.95 ERA into his next scheduled start against a very tough Astros lineup. At least it's at home.
Added 4:28 pm (EST)
Added 4:28 pm (EST)

R. Stock - SP
CHI
Cubs optioned RHP Robert Stock to Triple-A Iowa.
The right-hander was recalled on Wednesday to make the start versus the Mets and allowed five runs on four hits and six walks, so this demotion was hardly a surprise. The Cubs recalled Brad Wieck from Triple-A to take Stock's place on the roster.
Added 4:26 pm (EST)
Added 4:26 pm (EST)

J. deGrom - SP
NYM1
Jacob deGrom (shoulder) received a second opinion on his MRI and was told there are no concerns.
Mets manager Luis Rojas told reporters that the team is not currently thinking of putting the right-hander on the injured list. The cautious route would be to rest the two-time Cy Young award winner for a brief period in order to keep him fresh for the long summer, but for now, it seems deGrom is day-to-day and will perform his usual routine for in-between starts. Rojas would not commit to whether or not the ace would be making his next start, but this is great news regardless of how the Mets proceed forward.
Added 4:15 pm (EST)
Added 4:15 pm (EST)

G. Stubbs - C
HOU
Astros recalled C Garrett Stubbs from Triple-A Sugar Land.
The 28-year-old will take the place of Alex Bregman on the Astros roster, who was just put on the 10-day injured list with a left quad strain Thursday. Stubbs is just 3-for-15 at the major league level this season, but carrying a .333/.471/.444 slash line in Triple-A.
Added 4:11 pm (EST)
Added 4:11 pm (EST)