Dan Malin is here to look around the Fantasy Baseball waiver wire to point out some pitchers you'll want to target for your playoff run! 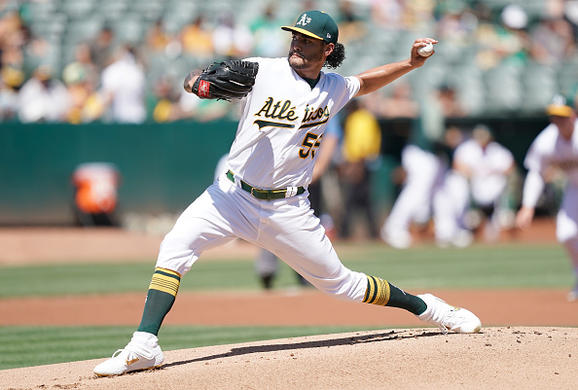 Congratulations on making it this far! Fantasy football draws a lot of buzz and attention because it’s relatively easy for anyone to play. The games fall on a few days of the week and it’s just easier to manage than baseball. Fantasy baseball takes dedication and the willingness to not completely forget you even have a fantasy baseball team. So with that said, I’m going to approach this column with an emphasis on pitchers going forward. As the season winds to an end and your pitchers no longer make starts, most teams drop players for replacements to get extra starts. It’s a smart move. For your offense, you’re probably locked in with the bats you have that have gotten you this far. I’ll still touch on a few hitters, but the next few weeks will dedicate more attention to pitching.

Sean Manaea SP OAK – Manaea has looked fantastic in two starts. In 12 innings of work against the Yankees and Tigers he has 15 strikeouts, three hits allowed, and five walks. The walks are concerning, but you’ll take the good with the bad and there’s no reason to complain about the strikeout upside. Manaea’s next start comes on the road against the Rangers on Saturday. And if you survive and move on to the next round (hopefully the championship round) then you can use Manaea again in his next appearance, which also comes against the Rangers, but this time at home next Saturday. 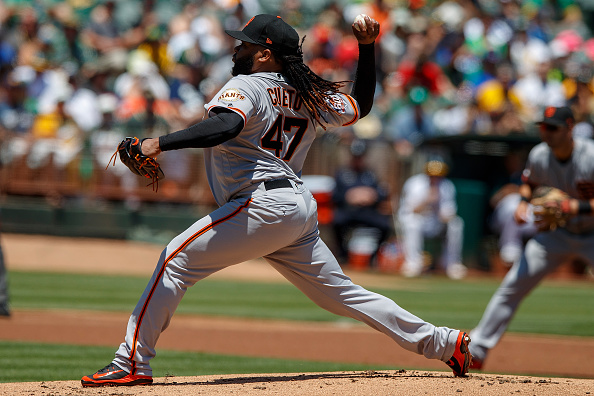 Johnny Cueto SP SF – Cueto made his return from the injured list on Tuesday night against the Pirates. He lasted five shutout innings with allowing one walk, one walk, and striking out for. Fortunately for you his second start comes against the Marlins at home on Sunday. Prior to being placed on the Injured List he wasn’t performing very well, but a matchup against the Marlins is too good to pass up and he looked great against Pittsburgh. It’s time to build up your courage and stream your way to a championship folks!

Christian Yelich Replacements – If you’re a fantasy baseball player who likes to go to bed early, and you just so happen to own Christian Yelich , you’re waking up to the worst news imaginable. On Tuesday night, Yelich fractured his kneecap. So once you get over the awful taste of throwing up in your mouth, you can look to waivers for some semblance of a replacement because there’s Yelich is done for the year. Some names you can look at are Mark Canha , Bryan Reynolds , Corey Dickerson (three home runs in his last two games), or a guy like Anthony Santander who has six home runs since August 25th. Replacing Yelich is no easy task. Nay. Replacing Santander is impossible, but you’re just looking for any form of power off waivers at this point.

Alex Young SP ARI – Alex Young can really help fantasy baseball owners over the next two weeks with solid matchups. The first start comes on the road against the New York Mets and the second comes at home against the Miami Marlins. Similar to Cueto we’ll be targeting the Marlins and for good reason: they suck. They’ve scored the second-fewest runs in all of baseball with one of the worst offenses in the league rivaling only the Tigers. Don’t expect another 12-strikeout performance from Alex Young , his last outing against the Reds was an absolute outlier and fluke. But the matchups are good enough to play him in fantasy and hope for a win or a quality start.

Tony Gonsolin RP, SP LAD – Gonsolin may only get one more start for the Dodgers and it’s not due to poor performance or a workload cap. The often-injured Rich Hill is set to come off the Injured List and the move simply pushes Gonsolin back to the bullpen in all likelihood. Gonsolin exhibited some poor control in his last start and was yanked after four innings against the Giants. This Saturday he’s set to take the mound against the Mets in Chase Field and in a 12-team format he’s a decent streamer if he happens to be available on your waiver wire.

Hanser Alberto 2B, 3B BAL – Alberto’s a guy that can do a little bit of everything and he comes with some roster flexibility. Though at this point in the season that doesn’t move the needle too much. He’s always a candidate for multi-hit games and he doesn’t strike out very much which gives him some appeal in points leagues despite the poor walk rate. The O’s haven’t truly committed to him as their full-time leadoff hitter, which is frustrating, and you might be set on offense so it’s understandable if this doesn’t exactly knock your socks off. 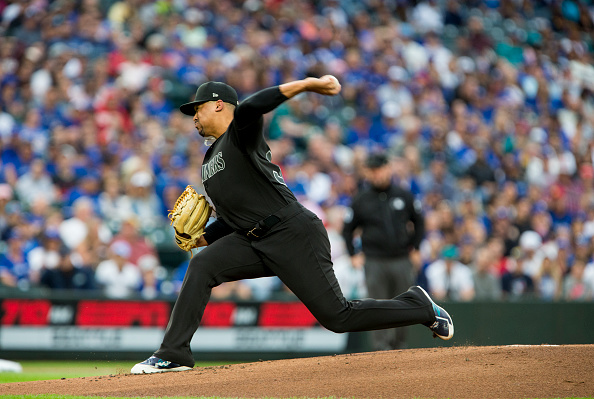 Justus Sheffield SP, RP SEA – I’m optimistic he’s turned the corner and hit his stride, or at least shown why he’s among the top pitching prospects in baseball. He averages nearly a strikeout per inning with ease, but everything else has been a problem. Heading into Tuesday night he allowed three home runs, nine walks, and 20 hits in 16.1 innings of work. That’s hot garbage. But he held the Cubs scoreless in five innings in his last outing, and followed that up by allowing one earned run over six innings against the Reds Tuesday night. He did allow seven hits and three walks so it wasn’t a great start by any means. Sheffield has experienced an immense amount of growing pains. Hopefully he finishes the season strong as Sheffield gets the White Sox at home on Sunday.

Robert Dugger SP MIA – How’s this for a plot twist, huh? Relying on a Marlins pitcher with your fantasy baseball fate hanging in the balance? This is a matchup if you’re looking to pad some numbers a little bit or get a handful of points in that format. Dugger gets a road matchup against the Giants next week. In his last 16 innings of work, Dugger has only allowed four earned. That comes with a caveat; he was pulled after just three innings in his last start, and he also had three unearned runs in that span as well. He’s a deep league flyer if you’re desperate. The Giants offense has gone a little cold heading into Tuesday night’s slate. In their previous five contests they scored a total of ten runs including two shutouts.

Josh Rojas OF ARI – Rojas can be considered a deep league replacement to replace Christian Yelich and he’s been swinging a decent bat over the last two weeks. Since August 26th he’s hitting .310 with a .920 OPS and he’s been showcasing a little more speed on the base path which everyone was aware of from his 32 stolen bases across the minors this season. Like I said at the top, your offense is probably set if you’ve made it this far so pitching is probably the bigger priority. But some owners in deeper leagues need to replace Yelich as well. Another option is Victor Reyes who has eight multi-hit games since August 28th and he’s been more active on the base path. Kyle Tucker and Brian Goodwin are also available on waivers, with Tucker being the one with the higher power upside. 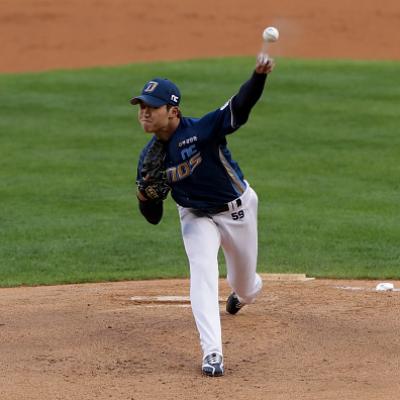 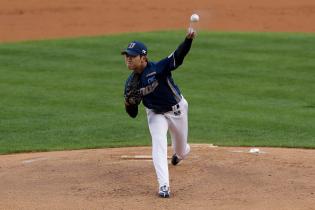 A. Judge - RF
NYY
Aaron Judge (rib) told reporters after Monday night's intrasquad game at Yankee Stadium that he fully expects to be ready for Opening Day.
Judge started in right field and batted second in the Yankees' "A" lineup Monday, and it all went off without a hitch. He was diagnosed this spring with a stress fracture in his first right rib -- an injury that dates back to a dive in the outfield last September -- but Judge said he resumed swinging a bat about a month ago and he looks to be at or near full strength leading into MLB's planned 60-game campaign. The 28-year-old slugger will be a threat for the MLB home run crown this summer if he can avoid further setbacks.
Added Yesterday 9:18 pm (EST)
Added Yesterday 9:18 pm (EST)

T. Glasnow - SP
TB
Tyler Glasnow has yet to join the Rays for summer camp.
There's a chance he's one of the players affected by COVID-19 testing delays. Or maybe there has been a positive diagnosis. Teams are being quiet in some (most?) cases. Glasnow, 26, looks like an emerging fantasy ace entering MLB's planned 60-game campaign after posting a 1.78 ERA, 0.89 WHIP, and 76/14 K/BB ratio over 60 2/3 innings (12 starts) last season. Starting pitchers will likely be limited to 10-12 starts this year.
Added Yesterday 8:03 pm (EST)
Added Yesterday 8:03 pm (EST)

K. Ginkel - RP
ARI
Kevin Ginkel joined the Diamondbacks' summer camp workouts on Monday.
It was the first time Ginkel had been spotted at Chase Field since this phase of the return-to-play initiative got underway. He may have been among the players delayed in MLB's COVID-19 testing protocol. The 26-year-old right-hander will enter the 2020 season as an important piece of the Arizona bullpen after delivering a 1.48 ERA, 0.986 WHIP, and 28/9 K/BB ratio over his first 24 1/3 major league innings in 2019.
Added Yesterday 7:31 pm (EST)
Added Yesterday 7:31 pm (EST)

D. May - SP
LA
Dustin May (side) said he expects to be stretched out to five innings at the start of the season.
May pitched a three-inning simulated game on Sunday in Los Angeles and is trending in the right direction at summer camp after battling soreness in his side for much of spring training. The talented young right-hander offers valuable rotation and bullpen depth for the Dodgers entering the 60-game campaign.
Added Yesterday 6:29 pm (EST)
Added Yesterday 6:29 pm (EST)

Y. Moncada - 3B
CWS
Yoan Moncada has yet to participate in any summer camp workouts with the White Sox.
“I’m just holding him out right now,” manager Rick Renteria said Monday. Two unnamed players among the team's 60-man pool have tested positive for COVID-19. It could be that Moncada is one of those cases, or that he's simply being held up within the testing protocol. A number of clubs have experienced delays.
Added Yesterday 6:22 pm (EST)
Added Yesterday 6:22 pm (EST)

G. Stanton - DH
NYY
Giancarlo Stanton said Monday that his right calf recently began feeling "100 percent" and that he'll be ready to serve as the Yankees' DH at the start of the season.
Stanton is in fact starting at DH and batting cleanup in the Yankees' intrasquad game Monday night at Yankee Stadium. He was going to be unavailable for the originally-scheduled Opening Day in late March after suffering a Grade 1 strain of his right calf in February. The power potential and subsequent fantasy upside here is obvious if Stanton can manage to stay healthy moving forward. He was limited to 18 regular-season games in 2019.
Added Yesterday 5:38 pm (EST)
Added Yesterday 5:38 pm (EST)