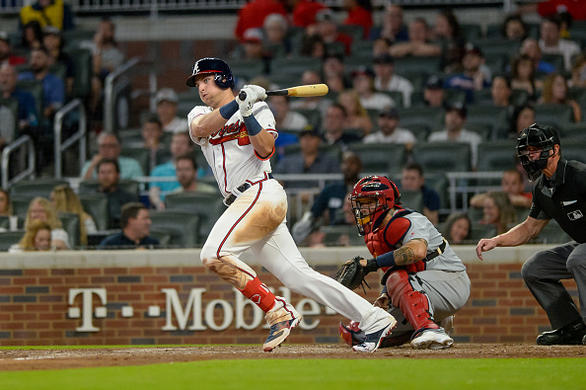 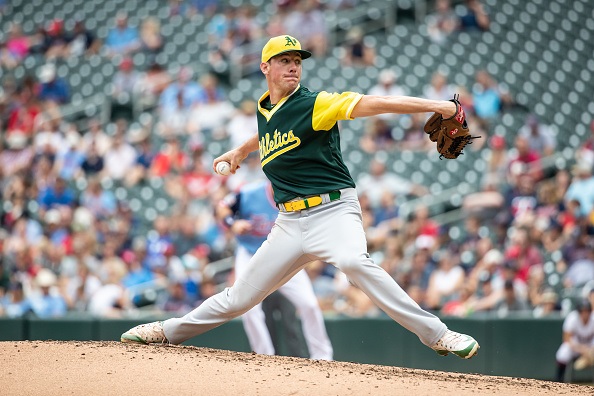 Tommy La Stella (Second Baseman, Third Baseman – Los Angeles Angels) FAAB Bid: 10-12% - He just won’t stop raking. La Stella’s power surge has opened the eyes of many this season and he’s probably getting tested for PED’s twice a week. Heading into Friday night he had 11 home runs with a .301/.388/.611 slash line. His only other extra base hits are a pair of doubles so he may just be getting lucky with the 11 home runs, but he’s incredibly productive in the leadoff spot and he’s under 60% owned on both Yahoo and ESPN. At this point he should be owned and played everywhere until he cools off… If he cools off.

Chris Bassitt (Starting Pitcher – Oakland Athletics) FAAB Bid: 10% - Bassitt made the waiver column a couple weeks back and has continued to impress despite the signs of regression coming. At the time of this writing, he carries a 1.93 ERA with a 3.69 FIP, but a 3.36 xFIP. In five starts (32.2 innings of work) he has 38 total strikeouts against suspect lineups, but he does draw the Indians in his next start. He’s not the sexiest name for a pitcher worth adding, but he’s delivering strikeouts and has three quality starts in his last four trips to the mound. If you aren’t feeling great about Bassitt, then give Zach Davies some consideration. Davies doesn’t have the strikeout upside that Bassitt possesses, but he’s generating wins and quality starts at a healthy clip.

Gregory Polanco (Outfielder – Pittsburgh Pirates) FAAB Bid: 6% - You might be able to get Polanco for cheap as he’s under 50% owned across numerous platforms right now. Since May 4th Polanco has three home runs, a triple, and three doubles. He’s slotted into the third spot in Pittsburgh’s lineup and touts an OPS of .999 in that span heading into Friday night. He’s seeing the ball very well and can contribute in shallower, or five-outfielder leagues.

Luke Jackson (Relief Pitcher – Atlanta Braves) FAAB Bid: 20% - Jackson’s ownership is ticking up on Yahoo, but it’s still relatively tame on ESPN at under 30% owned. It needs to be higher. Since last Friday he’s record three saves accompanied with seven strikeouts in that short span. I’m doing my best not to list guys in back-to-back articles, but it looks like Jackson has a good grip on the closer’s job in Atlanta and he deserves to be owned in more leagues.

Austin Riley (Third Baseman, Outfielder – Atlanta Braves) FAAB Bid: 12-14% - The Braves are loaded with prospects and that has been well documented pretty much everywhere. 2019 just feels like the year of early prospect call ups and Riley’s a name that should be recognized among the likes of Eloy Jimenez, Vladimir Guerrero Jr. , Nick Senzel , etc. To catch everyone up to speed, Riley’s Triple-A numbers are outstanding so far this year. He slashed .299/.371/.681 with 15 home runs and 39 RBI in just 37 games. He picked up right where he left off in the minors, wasting no time in his big league debut to hit his first career home run and he followed that up with a three-hit effort on Thursday night, and a two-hit effort on Friday. Be warned that Riley’s ownership is spiking and if you want him you need to grab him NOW.

Lucas Giolito (Starting Pitcher – Chicago White Sox) FAAB Bid: 6-8% - The Love/Hate relationship with Lucas Giolito rolls on as he’s looked pretty good over his last two starts. There was some concern on April 17th when he left his start against the Royals in the third inning. But over his last two starts (14.1 innings) against the Blue Jays and Royals he has 16 strikeouts, four walks, and he’s allowed just one earned run. Coincidentally enough his next start on Saturday comes against the Blue Jays again so hopefully you can pick him up for this tasty matchup.

Brendan Rodgers (Second Baseman, Shortstop – Colorado Rockies) FAAB Bid: 4% - Get ready for a handful of prospects in this week’s piece because there were quite a few to get called up. Rodgers is an interesting guy. He’s benefitting from the fact that Garrett Hampson is back in the minors while Ryan McMahon is struggling. So Rodgers is getting a shot at the second base job and he could stick. But for whatever reason the younger players (save for Trevor Story ) have struggled with initially getting called up to play for Colorado. Coors Field doesn’t seem to be the problem, at least not in McMahon’s case. Rather, the struggles tend to come on the road for the young Rockies. Rodgers is a highly touted prospect and one the front office is very high on, but temper expectations because he’s still a rookie. In Triple-A so far he’s built a nice little stat line for himself slashing .356/.421/.644 with nine home runs and 34 runs scored in 35 games. He’s worth a stash if it won’t cost you much. 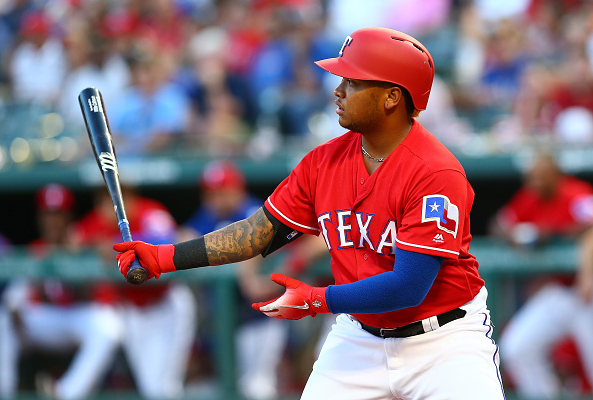 Willie Calhoun (Outfielder – Texas Rangers) FAAB Bid: 6-8% - This might be underselling the FAAB bid, but at the same time you need to be cautious with rookies. While the playing time has been hard to come by for Calhoun, and to be fair, he wasn’t great in 2018, but the power looks to have returned in 2019. In his first  two games after being called up he went yard in both while driving in five RBI and scoring four runs. Even Friday night he managed to get another multi-hit game. It’s a small sample size, but they’re slotting him in the two-hole. And this is a lineup that’s isn’t all that terrible with Shin-Soo Choo leading off in front of Calhoun, with Hunter Pence and Joey Gallo rounding up the heart of the order. Calhoun could pay pretty significant dividends.

Chris Martin (Relief Pitcher – Texas Rangers) FAAB Bid: 4% - You’re about to read up on quite a few Texas players in this section because they’re all under owned. Even Hunter Pence still. I think fantasy owners are hesitant to pick up Martin because he hasn’t logged a save since last Wednesday. But here’s the truth of the situation, the Rangers haven’t had a save situation since then. After Martin registered his first save of the year the Rangers went on to lose five straight games and have won their last three contests in non-save scenarios. Over his last nine innings of work he’s allowed just one runner to score (which came last night on a solo shot to Harrison Bader ) and he has a dozen strikeouts. In the short-term, Martin still seems like he could get some saves, but the team just hasn’t put him in that spot.

David Fletcher (Second Baseman, Third Baseman, Outfielder – Los Angeles Angels) FAAB Bid: 3-5% - I’ve been hesitant to put Fletcher in this piece because he isn’t as appealing as some of the other hitters on this list, but the multi-position eligibility has to account for something in terms of roster flexibility for whoever picks him up. If you’re in a league that has a cap on the number of moves you can make then maybe you pass on this guy. But if there’s no cap then Fletcher’s a solid guy who helps in the counting categories. He touts an OPS under .800, but if he stays healthy then maybe he contributes ten home runs and ten steals while scoring 70-80 runs. The Halos move him around the lineup which is a bit annoying, but whether he’s hitting leadoff or ninth he can help your team in batting average and runs.

Logan Forsythe (Multiple Positions – Texas Rangers) FAAB Bid: 2-4% - If David Fletcher doesn’t really do anything for you then Forsythe could be the more recognizable guy that has a ton of position eligibility. You can play him at any infield position and he’s on a nice run over the past week. Since May 12th he has ten total hits, five of which were doubles and another was a triple. He’s also scored five runs and driven in six in that span. This Rangers lineup is filled with an interesting cast of characters that has proven it can put up some runs as of late, and Forsythe’s surge has certainly helped.

L. Gohara - RP
LAA
Angels released LHP Luiz Gohara.
Gohara was a highly-ranked prospect not all that long ago, but he ran into shoulder issues in the spring of 2019 and ultimately got released by the Braves before the end of the season. He went on to sign a minor league contract with the Angels, and it's all but official that there will be no minor league baseball games in 2020. The 23-year-old left-hander might not get another shot until 2021.
Added 8:16 pm (EST)
Added 8:16 pm (EST)

O. Hernandez - C
STL
Cardinals released C Oscar Hernandez.
Hernandez was in Cardinals camp this spring on a non-guaranteed minor league contract and went 0-for-6 with one strikeout during Grapefruit League play. The 26-year-old likely would have been ticketed for Triple-A Memphis, but it appears that there will be no form of a Triple-A season in 2020.
Added 8:06 pm (EST)
Added 8:06 pm (EST)